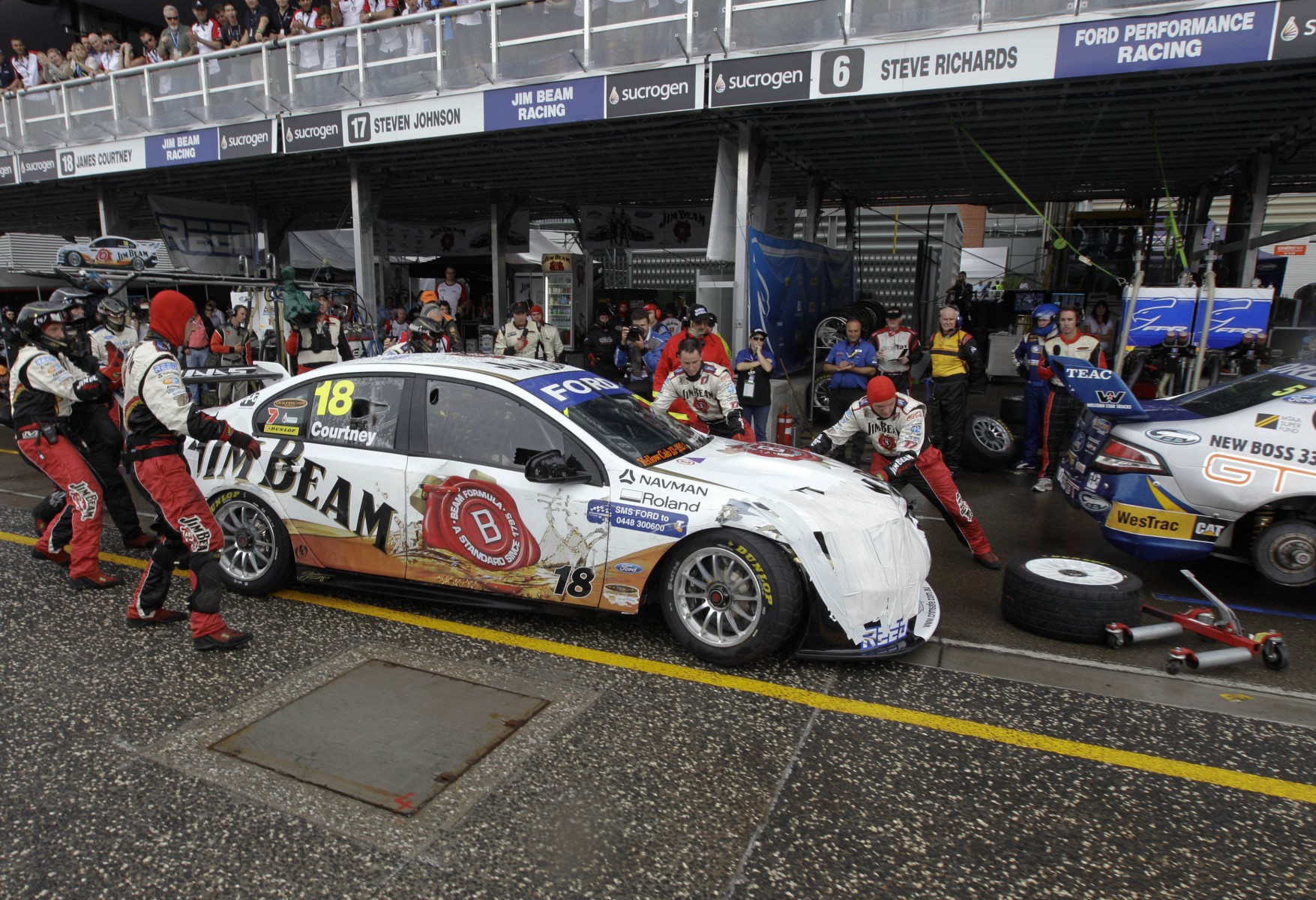 "That was amazing guys, you guys smashed them, awesome effort. Awesome stuff, guys."

It's the radio message from James Courtney to his Dick Johnson Racing pit crew that sums the Ford team's remarkable 2010 title breakthrough.

Not all races, and championships, are decided on the track, with the 2010 finale at Sydney Olympic Park testament to that.

The 2021 Repco Supercars Championship grid features four former champions, and three of them went head-to-head on the streets of Homebush over a decade ago.

Courtney, Jamie Whincup and Mark Winterbottom all went into the 2010 finale with a chance at the title, and it went to the former.

But Courtney's breakout season, which featured five race wins, was settled by his Dick Johnson Racing pit crew after an extraordinary all-in accident.

The stakes were high; DJR was running old Triple Eight Ford equipment, while Whincup was chasing his third consecutive championship.

After a Safety Car restart late in the Saturday race, the rain hit, and drivers were consigned to a street circuit which quickly resembled an ice skating rink.

It triggered a sequence of events which will stand the test of time, with drivers pressing on on slick tyres on a wet track.

Winterbottom sauntered into the lead before missing the chicane, and when the field arrived at Turn 5, drama unfolded. The three front-runners and title combatants all crashed, as well as a host of others.

With cars strewn over the circuit, the mad dash to return to the lane began. Whincup, with his right-front wheel locked, got there first. Then Courtney, his car crabbing into pit exit and unable to turn into his garage. Finally, Winterbottom, whose car was most bent of all.

Under the watchful eye of Adrian Burgess, DJR's mechanics frantically managed to send Courtney's Falcon back out into the race. Triple Eight did the same for Whincup shortly afterwards, but he only completed an out-lap and wasn't classified.

Courtney was classified 15th, and with Whincup's DNF, the points gap blew out to 113 points.

The next day, Courtney was only able to finish 14th, but it was enough to seal the title over Whincup, who was fifth behind winner Lee Holdsworth.

Speaking to Supercars.com in the years after the dramatic day, Whincup conceded his disappointment over his team being unable to get him back into the race in time.

"That certainly wasn't a good experience for me, it was probably one of the lowest experiences of Triple Eight in the modern era, where we just couldn't get the car fixed and back out," he said.

"In saying that, we felt proud enough that we wanted to put the car together properly to get back out.

"There's still debate whether the other car was put together properly, but you can debate that all you like.

"At the end of the day, we didn't finish enough races and that's what cost us." 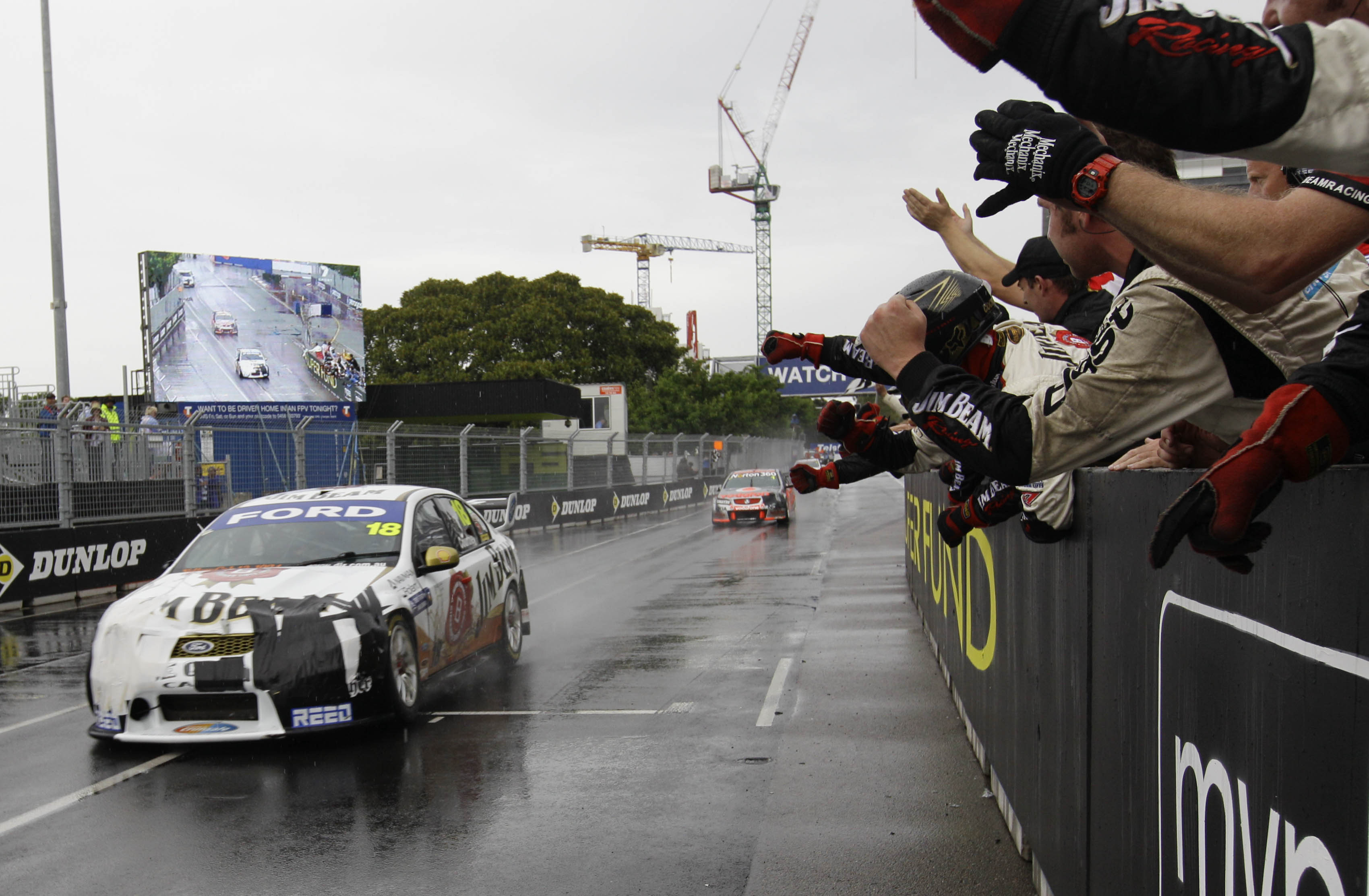 Whincup would go on to add five titles across the next seven seasons, while the now-Tickford driver Courtney is still chasing title No. 2, having completed nine seasons in the Walkinshaw stable.

However, while he would enjoy victory burnouts on the Sunday in 2010, Courtney's career highlight was sitting in a steaming, humid garage, foot out the door, watching his mechanics help him win the title he so sorely craved.

"The highlight for me was sitting in the garage at Homebush on that Saturday afternoon when I think 12 of the first 15 cars went into the wall," he said five years after his title success.

"Just to see the passion and how much the boys on the car wanted it as much as I did.

"To see guys grabbing red hot discs with no gloves on because they didn't want to waste time putting them on, just to get it out there.

"For me, that's better than the championship, to see that passion and will to win.

"That's easily the best moment of my whole career."

Courtney's bid for a second championship will commence at the Repco Mt Panorama 500. Tickets are on sale now.