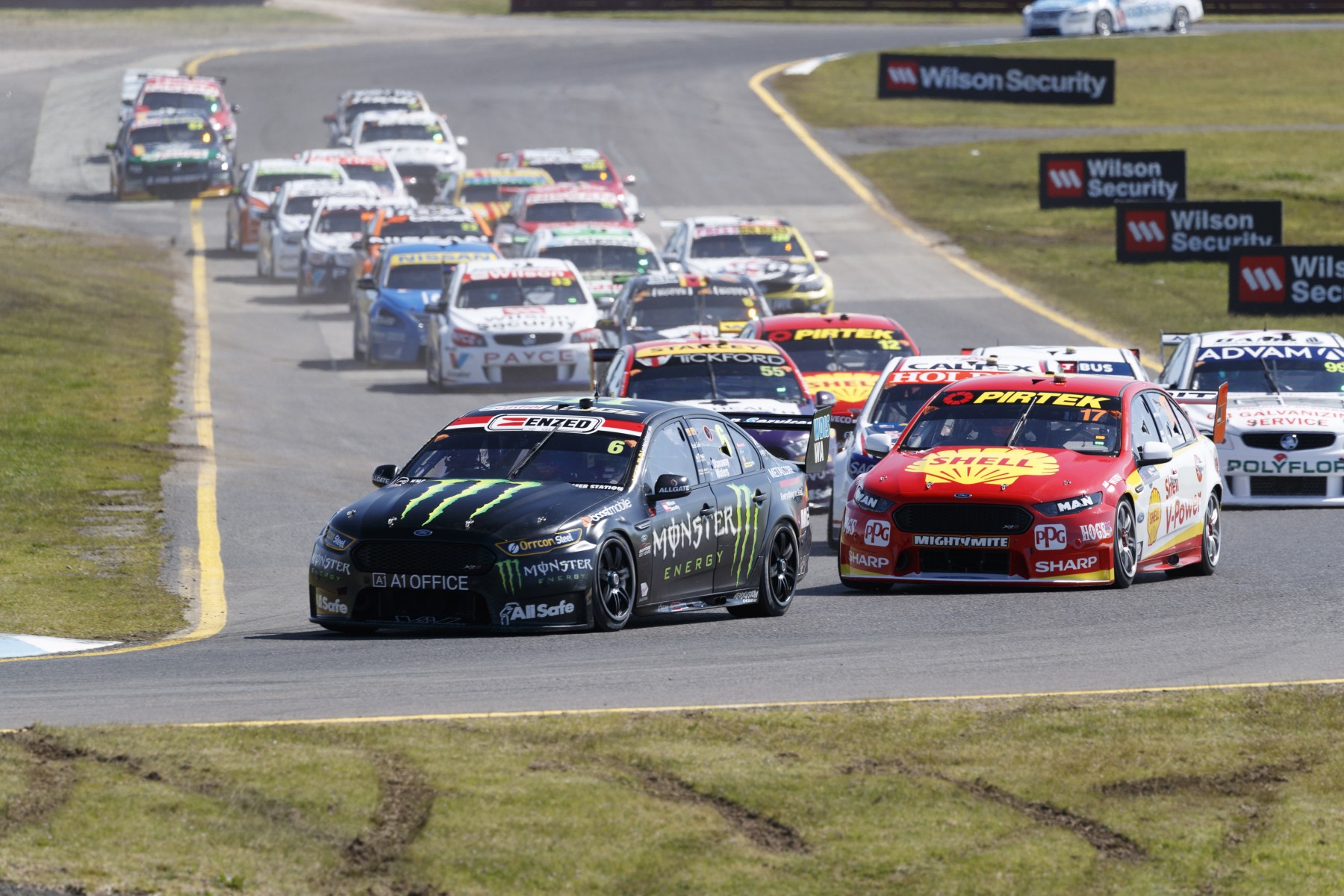 Supercars.com takes a look back at the hot topics from the first leg of the PIRTEK Enduro Cup at Sandown.

The fight between the Red Bull Holden Racing Team and Shell V-Power Racing has consigned Prodrive Racing Australia to the relative shadows this year, with the Melbourne-based team winning just two races prior to Sandown.

But the Ford squad fired back at the 500, taking a double podium led by first-time winners Cam Waters and Richie Stanaway. The Monster-backed entry started the main race from pole, and while Paul Dumbrell had made his way into the effective lead before suffering a puncture, Waters had Scott McLaughlin’s measure over the second half of the race.

Chaz Mostert and Steve Owen came home in third, despite serving a five-second penalty for contact Owen made on Luke Youlden in the Erebus Commodore, to cap PRA’s strongest day of the season.

While team principal Tim Edwards was keen to downplay the impact of engine upgrades in the Falcons of Waters and Mark Winterbottom/Dean Canto - but not tested on track pre-event due to the tight timelines around their introduction - it was a sign of its intent to be “super-aggressive” and get back to winning regularly.

The Sandown result is the prefect prelude to Bathurst, which had previously been billed as a race in two between the Red Bull and Shell heavyweights. 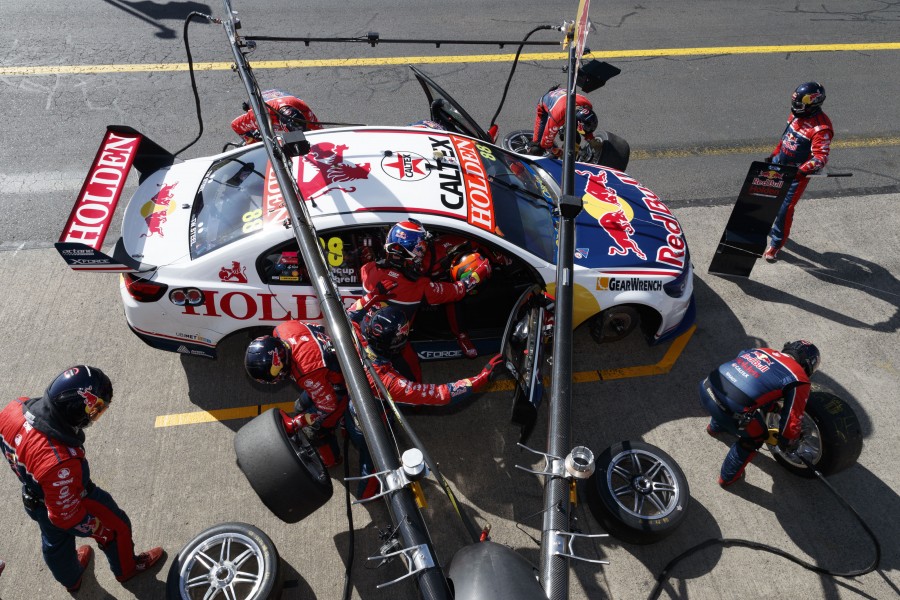 Tyre failures shaped Sunday’s race and dented the Red Bull drivers’ title aspirations. Dumbrell was sailing smoothly before picking up a puncture on lap 35, which Jamie Whincup felt was “most likely” due to crossing the end of the Turn 1 exit kerb.

After falling outside the top 20, they regrouped to sixth, with Whincup now 84 points behind McLaughlin. One of the spots the #88 entry regained was at the expense of team-mate Shane van Gisbergen, who was running third until the closing stages.

That failure, this time on the right-front, dropped van Gisbergen and Matt Campbell to 15th, with the reigning champion now 420 points off top spot and declaring his title defence over.

Team manager Mark Dutton was reluctant to blame the Turn 1 kerb on Sunday night, instead taking the blame for the failures, accepting its set-up aggression had been costly.

Nissan’s tally of 2017 tyre failures also grew, with three in total across the qualifying sprints and main race, while Erebus was among other victims with both of its cars struck down on Sunday. 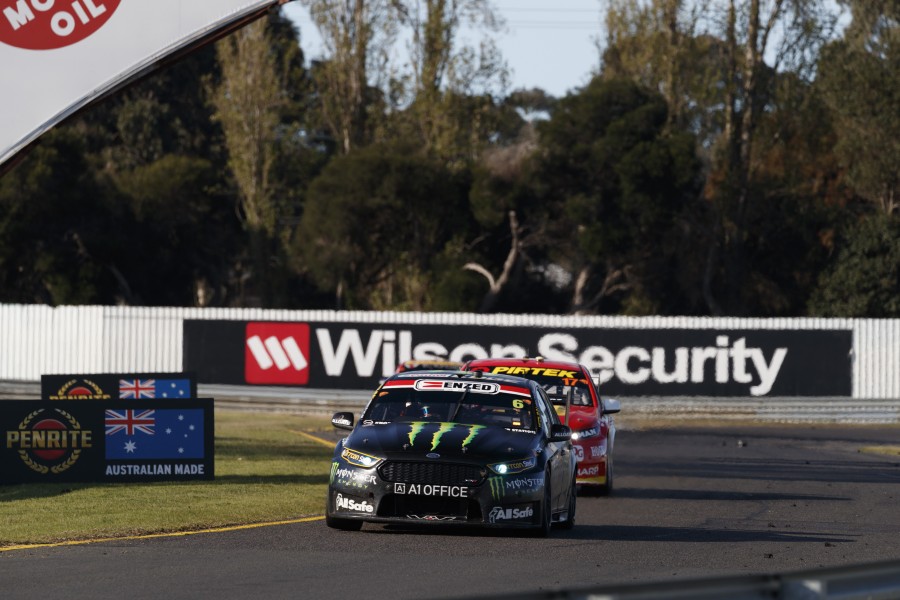 Just 0.6746 seconds split Waters and McLaughlin at the end of 125 laps of racing, but two ‘what if?’ moments remain.

The championship leader all-but eradicated what had been a three-second lead for Waters approaching the final pitstops, which prompted Prodrive to pit its Falcon first, on lap 87. However the front-right wheel nut proved difficult to remove, even after the other three tyres had been changed.

“This is going to kill them,” commentator Neil Crompton declared as the troublesome wheel nut refused to budge. “This is going to really hurt.” Fortunately for PRA, there was still plenty of fuel going in, with the 10 seconds it took to get the front-right off easily fitting within the 21.7s of the total stop.

McLaughlin pitted one lap later, for what was a clean stop. But he had to back off rejoining the fast lane as the Nissan of Rick Kelly ventured past.

That pause helped Waters shoot past down the main straight and re-open a margin of around three seconds at the start of the final stint, with McLaughlin having to pass the Nissan on cold tyres.

While he still classed second and an extended championship lead as a win, McLaughlin later noted that he “got screwed a little bit in that last pitstop, I think that really cost us the race”. 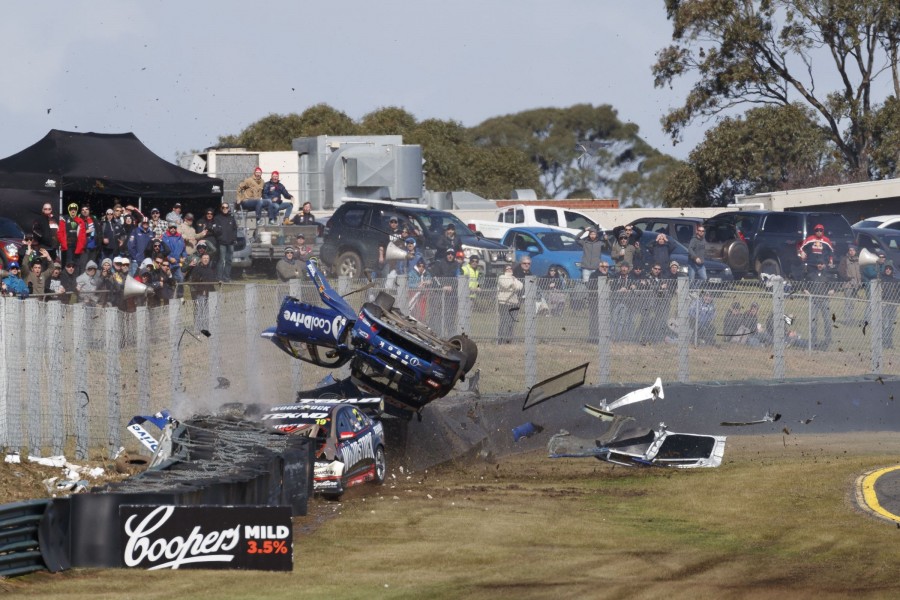 Headlined by Todd Hazelwood’s mammoth accident during the co-driver sprint race, after he was fired off the road by Jonathan Webb at the end of the back straight, Turn 6 crashes littered the weekend.

For the second year running, following James Golding’s 2016 accident, the race was red-flagged after a driver arrived at Turn 6 on the first lap with a puncture from the opening exchanges.

This time it was Taz Douglas, with Lucas Dumbrell Motorsport at least not leaving Sandown with a written-off car like Brad Jones Racing, while the corner had also claimed Jason Gomersall’s Touring Car Masters Torana.

In all three cases, significant time was required to rebuild the tyre wall and repair armco barriers, the Douglas crash stopping the race for nearly one hour and reducing the distance from 161 laps to an eventual, time-limited 125.

Naturally, there were no shortage of opinions offered over the weekend on every topic from how to improve safety at the corner, to speeding up the barrier repair process to starting the race earlier in order to avoid a significantly shortened race.

While such issues will be investigated by officials in the aftermath of the event, the immediate takeout was the impressive level of safety in the current Supercars, for which Sandown marked the mandatory introduction of increased leg protection.

The most thankful of all for the improvements of course was Hazelwood, who later noted he probably wouldn't have been able to walk away and race almost immediately afterwards in Dunlop Super2 if the accident had occurred as little as five years ago. 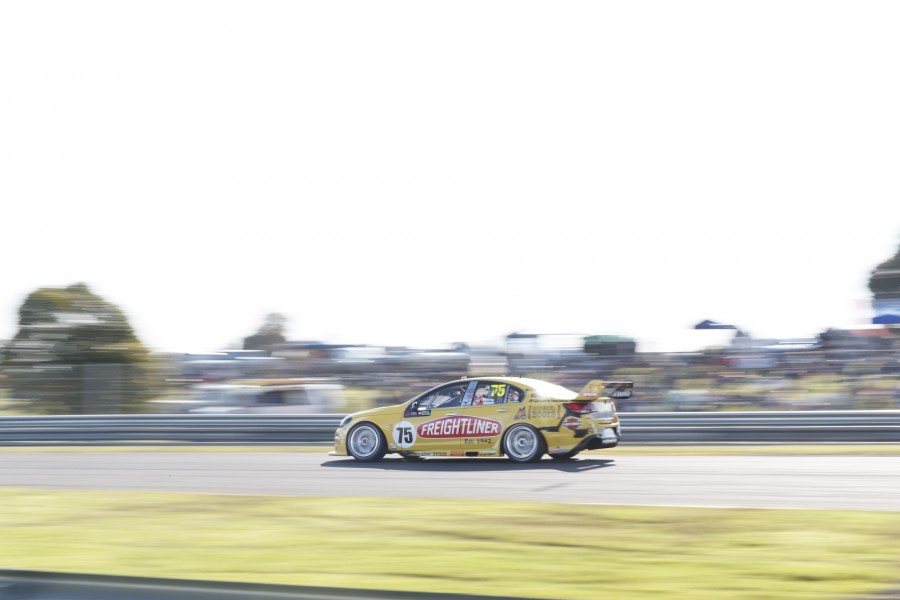 The devil’s in the detail

Sporting a tribute to Norm Beechey across its three Commodores, Brad Jones Racing had little to smile about at Sandown.

The Hazelwood/Webb accident added to its damage bill and means the Albury squad is currently building up another new Commodore, while Nick Percat and Macauley Jones battled a vibration and broken rear-wing endplate on their way to 23rd at the flag.

BJR’s only consolation was Tim Slade and Ash Walsh crossing the line in ninth place, despite Walsh being turned around on the first lap. From there, an alternate strategy got the Commodore running at the front of the field, even if it didn’t have the pace to ultimately stay there.

However how that fitted into the driving-time requirements was scrutinised during the shortened race, and then by stewards who elected to exclude the car on Sunday evening.

The key point was the race running to 125 laps rather than the scheduled 161. BJR was in the clear on 8.4.6.1 - covering total driving distance - but found to be in breach of 8.4.6.2 that outlines the minimum ‘resting time’ for each driver as at least one-third (54 laps) of the scheduled distance.

Whether or not the rule is tweaked in future, one can only hope that the high-profile nature of the BJR example and the clarity that the stewards' ruling provides will prevent a repeat of such a mistake by any team should an enduro again finish to its time-certain cut-off.