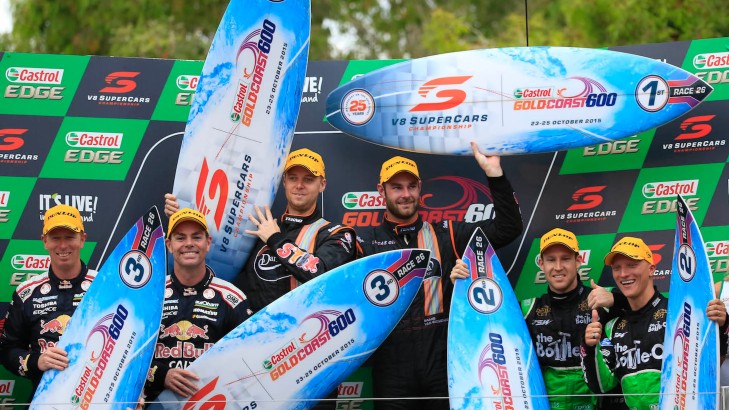 The 2015 PIRTEK Enduro Cup has been blown wide open heading into the final race today with five combinations in with a mathematical chance of taking it out.

Ironically, it was a collision with the Tander car in the pits that brought the race undone for the Ford pair.

150 points are up for grabs today on the notorious 2.96km beachside circuit, however yesterday was extremely tame with only one non-finisher from the event.

The winners of the opening 2015 Castrol Gold Coast 600 race, Darrell-Lea STIX Shane van Gisbergen and Jonathon Webb sit 30 points behind the lead - and given yesterday's form could be a strong chance to upset the factory Ford and Holden teams in front of them.

Bottle-O Racing's David Reynolds and Dean Canto are fourth on the table just 54 points behind the lead - the duo isoftenstrong on the streets of Surfers Paradise.

Lowndes stole the trophy in the final race in 2013 and in current form, the Supercheap Auto Bathurst 1000 Champions could very much do the same again this afternoon.