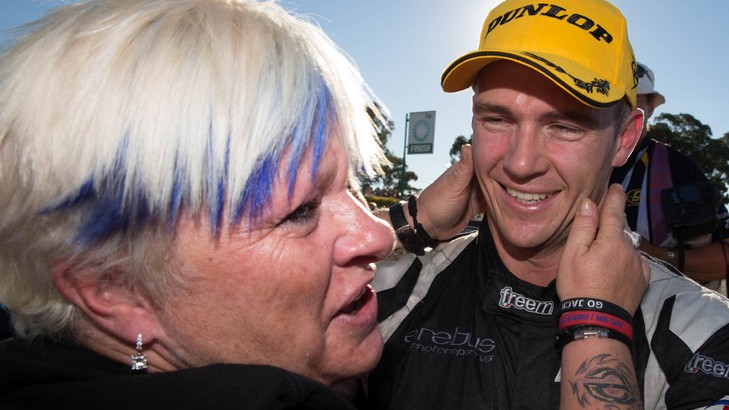 "We're up the front and here to stay," declared Lee Holdsworth, who took his Erebus Mercedes AMG to its historic first V8 Supercar win.

The Kiwi ran wide a few laps earlier, but Holdsworth and his Merc couldn’t capitalise. Biding his time, Holdsworth made the pass up the inside of turn three to an eruption from the crowd.

“Pretty emotional,” the Merc driver said getting out of the car.

“It has been such a hard 12 months, what’s gone on in the week hasn’t helped… I’m so proud of the boys at Erebus.

“We’re looking for a sponsor at the moment and this is the best way to find one.”

Team owner Betty Klimenko could hardly contain herself in the closing stages.

“To every single fan and person who stood in the rain with me, for this guy who believed in himself all of last year and all the people that believed in him – thank you so much,” she said.

It was an intense follow-up to today’s earlier 100km dash, with front row qualifiers Coulthard and Scott McLaughlin and his Volvo barely making the grid, after last minute mechanical dramas.

McLaughlin got the jump and led lap one – but on lap eight had to pull into the garage and relinquish the lead to Coulthard, with battery dramas.

Kiwi compatriot Shane van Gisbergen was also in the mix, but dropped down the order with shot rear tyres and mechanical issues.

It was a horror run for Red Bull Racing Australia – after poor qualifying, Lowndes finished 16 and Jamie Whincup 19.

A number of incidents are being investigated from today's races, involving Michael Caruso, Jason Bright, James Moffat, David Reynolds and Nick Percat – as well as Russell Ingall and Lucas Dumbrell for bringing the sport into disrepute.

Lowndes continues to lead the Championship from Coulthard by 18 points. Click here for full results.