Fiore Unsure Where He’ll End Up 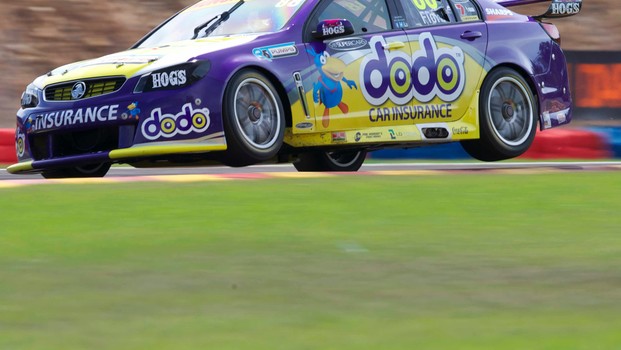 Tyres have been a big talking point thisweekend, with a tight allocation across the V8 Supercars SKYCITY Triple Crownweekend.

Dodo Insurance Racing’s Dean Fiorecommented on the situation ahead of qualifying this morning, saying it wasdifficult to know where everyone would end up on the grid.

This comes after Mark Winterbottom spoke candidly in yesterday’s press conference about the way Practice unfolded withteams all running different quality tyres, and many down the field mentioned how difficult it was to gauge yesterday.

While Fiore said Practice was still useful, he admitted at least one session was a write-off and claimeddrivers running on wet weather tyres was “pathetic”.

“You almost have to write off at least one (practice session) to make the others useful,” Fiore said. “A lot of the guys are running wets. That’s pathetic … Obviouslyeveryone’s struggling with tyres, but it was good for us to have that firstsession (yesterday) and have a race run.

“It’s really difficult to tell who ransofts, who didn’t, what conditions everyone’s tyres are in – but it’s thesame old story, you find out of Saturday in qualifying where you’re at.”

So, doesn’t that make Saturday’s qualifyingmore exciting, given it’s unclear who the leaders are?

“To a certain extent – but it’s alsogood to have an all-out brawl on Friday in Practice Four because it’s reallycool to see where everybody’s at,” Fiore said.

“Everybody gets to see exactly wherethey’re at and if they can replicate that the next day … We’re trying to put on agood show but we’re also trying to watch the bottom line, that’s just thereality of it.”

Fiore felt the 60/60 Super Sprint formatrunning today – after a qualifying session and ARMOR ALL Top 10 Shootout –was good and backed the move to the new-to-2013 format, with the double file rolling restart that drivers have spoken out about.

“I like the format, I think it’s good andachieves what it’s meant to achieve – the double file restart is reallycool, so I’m looking forward to it.”

While there’s been plenty of attention onFiore’s teammate Scott Pye after the large accidents he’s been involved in thisyear, the West Australian and his crew have just been chipping away at their program.

“We’re happy with the car, we’ve made someprogress and we’re confident going into today,” he said.

In Practice Four Fiore was 12th, andcurrently sits 18th in the Championship.

Dean Fiore  ›
15' Repair Management/Team CoolDrive ›
2013 SKYCITY Triple Crown  ›
Stay In The Know
Sign up to the Virgin Australia Supercars Championship Newsletter
We use cookies to ensure that we give you the best experience on our website. If you continue to use this site we will assume that you are happy with it.Ok