Fiore set a 1:09.64s best early in the 30-minute session, narrowly quicker than the best Practice 1 time from 12 months ago, before light rain began to fall at the Melbourne venue.

While drivers initially persisted with slicks in the greasy conditions, the rain became heavier with 10 minutes remaining, resulting in the final runs being run on wets.

Dumbrell had a high-speed off at Turn 7 when the rain first began to fall, while Richard Muscat (Garry Rogers Holden) and Tony D’Alberto (Shell V-Power Ford) had spins.

Muscat’s came at Turn 4 after riding too much of the outside kerb on entry, while D’Alberto showed just how slippery the track had become when he rotated Fabian Coulthard’s Falcon on the entry to the front-straight.

Other high-profile co-drivers Matt Campbell, who is sharing with Shane van Gisbergen, and Scott McLaughlin’s partner Alex Premat ended up 10th and 17th respectively. Times, however, meant little due to the conditions.

“I was just starting to get into a groove when the conditions came over, which made it tricky,” said Campbell. “But the car feels good and we’ll just have to wait and see what this weather does.”

“The session was pretty average,” added Premat, “because since the start there was some small rain. I was just trying to tune up the car with the bars, trying to learn.

“In the dry conditions the car felt pretty good and in the wet it felt it need a tune-up, but I feel very comfortable. I’m looking forward to the weekend.” 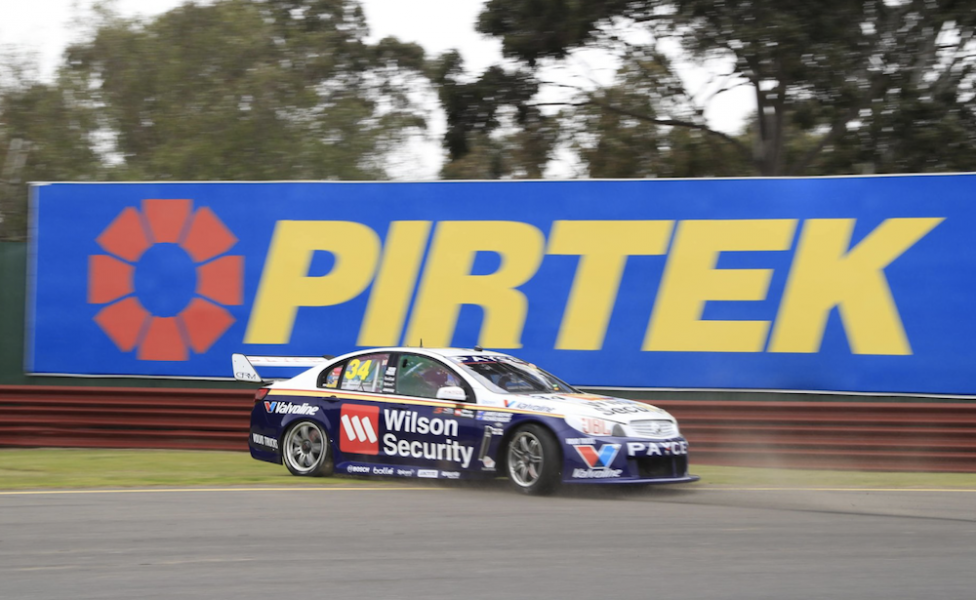 Richie Stanaway, who starred in the wet at Sandown last year, was just 20th in Cameron Waters’ Monster Ford after suffering engine issues.

“We had a messy session. We had a problem with the engine and had to pit, so we lost the dry running there,” explained Stanaway.

“Then we were just trundling around for the second half just trying to get a feel for it in the wet conditions, because it looks like there’s more of that on the way.”

In the early stages, Macauley Jones and Ash Walsh swaped between the #8 and #75 Brad Jones Racing Commodores, which is permitted today if teams cross-enter their drivers.

“We’ve got some different things in the cars and we want the drivers to try it so we can get some feedback,” explained team owner Brad Jones.

The primary drivers will get behind the wheel for the first time in Practice 2 from 1335 local time, before the co-drivers return for the third session at 1610.