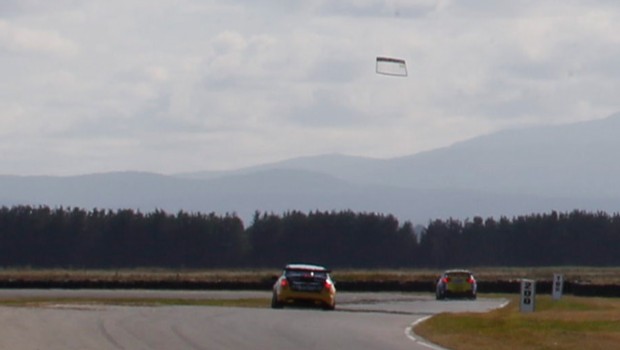 We’ve heard of driving with the window down, but DodoCommodore driver Dean Fiore took the concept to ridiculous extremes when therear screen of his car blew out on the back straight at Symmons Plains during theopening practice session for round two of the Championship.

While the screen spectacularly flew tens of metres into theair and eventually came to rest in the infield, Fiore and the team were nonethe wiser to the incident until he pitted the following lap.

The West Australian set the ninth fastest time in the‘bottom 50’ session at 52.77 secs, 0.36 secs behind the fastest driver, FPR’sMark Winterbottom.

Triple Eight has screwed as well as glued the rear screensof the RBR cars between sessions and recommended its customer teams do thesame.

V8 Supercars officials had also inspected the Fiore car but wasyet to make a decision whether to make screwing rear shields mandatory for allV8 Supercars.

However, it was stressed the failure had nothing to do withthe new Car of the Future regulations, as the installation process is unchangedfrom previous generation of V8 Supercars.

“I didn’t notice it,” Fiore told v8supercars.com.au. “As I comeinto turn six a bit of dust and crap come into the car and I thought ‘that’snot normal’.

“But there was no change in the sound or anything. Iwouldn’t have a clue when it came out.”

Engineer David Couchi explained how the failure occurred:“There is a black tinted strip that is a cosmetic thing so you can’t see thebonding on the inside.

“The gluing compound has attached to the tint which has comeoff from the screen, so that bonding isn’t good enough and that’s meant thescreen has departed.

“It’s a control screen so something will probably have to bedone about it category wide.”

Added general manager - motorsport Damien White: “Thefront screens are screwed as well as glued in and we may do that for the rearscreen too. There is certainly no reason to panic.”

Dean Fiore  ›
Stay In The Know
Sign up to the Virgin Australia Supercars Championship Newsletter
We use cookies to ensure that we give you the best experience on our website. If you continue to use this site we will assume that you are happy with it.Ok