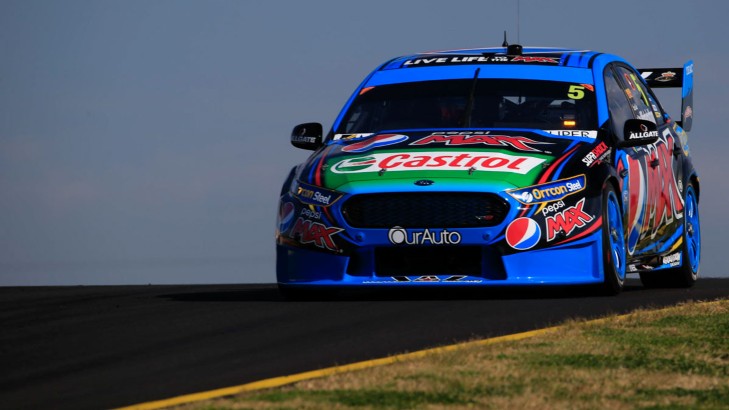 But while dropping hints, team principal Tim Edwards refused to say whether any of the latest updates would flow into the cars for the Pirtek Enduro Cup, which kicks off with the September 11-13 Wilson Security Sandown 500.

"There is some really exciting stuff we are working on," Edwards told v8supercars.com.au.

"We are absolutely testing it (at Winton), but if any of it makes it on the cars for the enduros I couldn't answer.

"And even if I knew and we had made that decision I wouldn't tell you anyway."

As long as bad weather doesn't intervene, all four PRA cars and eight drivers will run in the crucial warm-up today, including the drivers' championship top two and Pepsi Max team-mates Mark Winterbottom and Chaz Mostert.

Their respective co-drivers Steve Owen and Cam Waters will also be getting laps, along with David Reynolds and Dean Canto in The Bottle-O Falcon and rookie Andrew Heimgartner and Ant Pedersen in the Super Black Racing entry.

All the Queensland teams bar DJR Team Penske test at Ipswich on Tuesday.

"Quite seriously, we are working on some big things at the moment.

"But the things we are testing at the moment we might not implement them until next year.

"We might implement some this year and some next year, there is a lot going on."

The new FG X has dominated the championship in 2015. Of 23 races conducted so far, Winterbottom has won eight, Mostert five and Reynolds one.

Mostert is on course to set a new ARMOR ALL Pole Position record with 10 so far this year - the record is held by defending V8 Supercars champion Jamie Whincup with 13 in 2013. Winterbottom and Reynolds have claimed one pole each.

The numerically dominant Holden Commodore VF has claimed only two race wins in the last 17 starts, most recently when Whincup broke through for his first podium in 15 starts in the second 60km sprint at Sydney Motorsport Park on Saturday.

Winterbottom leads the championship by 174 points from Mostert, with Red Bull's Craig Lowndes 255 points behind. Reynolds is fourth, a further 27 points back.

If PRA finishes the season winning either or both championships it will be a first.

And as logical as it is to think those championship wins are the favoured outcomes with 13 races left, Edwards said PRA's constant and significant development was required just to give it a shot at those titles.

"We are not thinking it's a dead cert we are going to win this championship," he said. "That is why we are pushing as hard as we are. We don't know what the outcome is going to be.

"We are not under any illusion that people aren't going to start coming back and start beating us.

"We are working hard and so are our competitors.

"Everybody is pushing, everyone is trying to improve their cars.

"There is no way we can sit still, you have already seen Triple Eight come back at us. Not consistently, but they are certainly starting to punch again a bit and that's because they are working hard and they are making changes to their car.

"Everybody is doing it and we are just doing the same."

Edwards said that a key to deciding what parts made it onto the cars and what didn't would be the risk versus reward factor, as a failure to finish either Sandown or the Supercheap Auto Bathurst 1000 would cost up to 300 points in one go.

"You are never going to go to one of the big enduros without a new part having done X number of kilometres. Every team will have their own threshold as to what the part is and when you would put it into service.

"And of course if you put some new part on the car and it's a guaranteed tenth of a second gain you'll then have to weigh up what's the likelihood of failure and do that while internally debating whether you are going to put it on the car or not, or whether you just use it in qualifying and not the race.

"It's all those sorts of things."

Stay tuned to v8supercars.com.au for updates from this week's test days.