Feeling back for Winterbottom after ‘two years’ 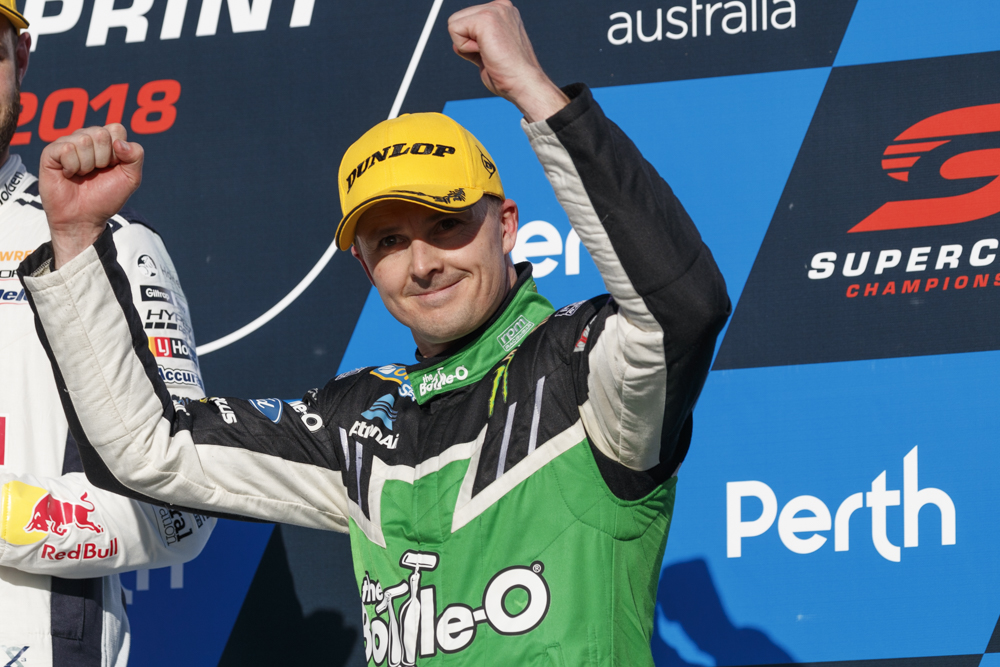 Mark Winterbottom says he had a feeling in his Tickford Racing Falcon that he hadn’t had in “about two years”, to break the team’s 2018 Supercars podium drought.

The four-car Ford squad headed to the Perth SuperSprint as the only multi-car team yet to record a podium this season, and following two particularly torrid events at Symmons Plains and Phillip Island.

Winterbottom deployed a strategy of stopping late in the 50-lapper, and cut his way from 17th through to second in the last 20 laps on fresher tyres.

While wary of declaring the team’s woes a thing of the past, Winterbottom was encouraged by the performance of his Bottle-O Falcon at Barbagallo Raceway.

“It’s a really good feeling,” he said. “We’ve been struggling in the races and we know it.

“The good part is we haven’t hidden behind it, we’re not there going ‘oh, this or that’. We’re just ‘we weren’t quick enough’ and worked our backside off to get it moving.

“This track, it’s quite low grip, it may suit our car a little bit better, but we haven’t come here with the same car.

“Until we get to Winton and have a look at it and have a play there, we sort of don’t know.

“For me, the feeling under the car is something I haven’t had for about two years. The changes we’ve made, I think hopefully are giving that.

“I didn’t have it here last year, that feeling that I had today.

“We’ve made gains, which is great, but whether it continues on, whether we go to Winton, it’ll be a new challenge but it’s a good feeling.”

This weekend’s event is the fourth in a block of five each separated by a fortnight, starting at Albert Park in mid-March and finishing at Winton in two weeks.

That tight schedule has limited the time at Tickford’s disposal to turn things around at its base, Winterbottom notes.

“The hard part with these races is that there’s five races in nine weeks, so when you’re struggling you don’t have a lot of time to actually do much development and stuff,” he said.

“Our engineers I think in the last four weeks have had about two days off, and that’s a credit to them, really.

“We don’t drive any different or do anything different but they’re putting in the hours, listening to what we’re saying. It’s a credit to them.

“I’m really happy for the team. To get a podium’s great and to be able to feel the car again underneath you, that’s a good feeling as a driver.”

Waters ran in the lead group early and was passed by Winterbottom during what the 2015 champion called his ”time trial” on fresh tyres, taking sixth place.

Mostert was 10th, recovering from being turned around by Jamie Whincup while entering pitlane for a second stop for tyres.

Rookie Richie Stanaway, meanwhile, crossed the line in 23rd but dropped one place with a 15-second penalty for contact with Lee Holdsworth at Turn 1.