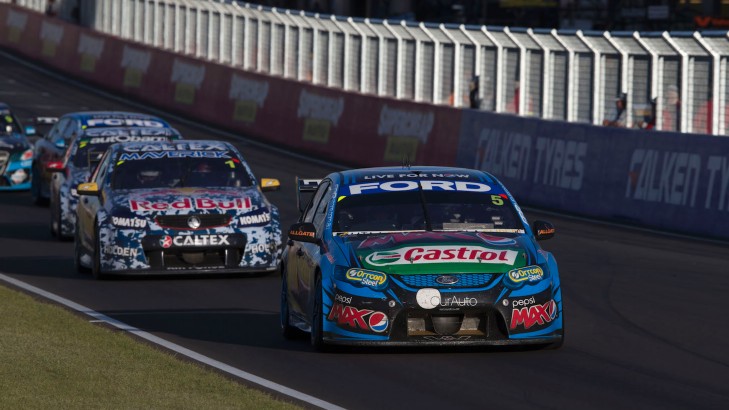 Championship leader and 2013 Bathurst winner Mark Winterbottom says he'd be happy to crack the magical 300 km/h mark at Mount Panorama so long as he's at the front of the field.

Rather than simply focusing on smashing the number down Conrod Straight, Winterbottom knows the important thing is maximising the advantage over his rivals.

In previous years, the V8 Supercars have been on the rev limiter before the end of the long straight, meaning the cars could not pick up any more speed.

The new gearing means there is the chance to go faster this year. But for Winterbottom it's not about the speed, it's about the advantage.

The Pepsi Max racer was unsure whether 300km would be broken down Conrod Straight - and said that in a V8 Supercar, it would feel fast in the cockpit regardless of the number.

"We should crack it mathematically but different gears mean it takes longer to get to top speed - the acceleration is slower," he explained.

"To be honest, you're not going to notice 5km an hour in the car, it's quick regardless.

"But it's the right gear ratio because at turn two last year we were on the limiter in fifth, so we should just be creeping up to it, which is good."

While all the talk has been on speed down the straight, there will be benefits at some parts of the circuit and losses at others, with some in pit lane suggesting overall lap times may not look much different, even if top speed is higher.

"They've changed all these gear ratios to stop the limiter, but now on the run up to three into The Cutting there's the chance we might not pull fourth gear - so there's a chance you might be on the limiter in third.

"So they've helped improve the limiter in spots, but now we might be on the limiter in other spots - so it's sort of a shuffling around the ratios a little bit."

Defending V8 Supercars Champion and four-time Bathurst winner Jamie Whincup agreed it was about getting the edge over competitors, and the change offered the potential for better racing.

"It's better on the engine and maybe will create an extra passing opportunity instead of being on the limiter," Whincup said.

"If both cars are on the limiter both are doing the same speed - but if another car's got a run and you've got a few more revs to pull out and pass that car, then I think it's a good thing.

"All running on the limiter does is hurts engines and [this] creates passing, so they've made the right call there."

While V8 Supercars does not have official data that illustrates 300km being broken, Perkins Engineering believed it was done 10 years ago.

Detailed on v8supercars.com.au, the debate raged through pit lane at the time, with Dick Johnson Racing also claiming to have hit 300km that year - though other teams were sceptical.

Jack Perkins - who will hit the Supercheap Auto Bathurst 1000 with either James Courtney or Russell Ingall for the Holden Racing Team - was adamant his dad's team achieved the feat back in 2005.

"The reality is we've already done it," Perkins said when asked whether it can be done this year.

"There's different theories and philosophies on how we actually achieve the speed, but if you measure the tyre circumference ... without factoring in any unknown growth quantities and engineering methods, reality is the calculated speed is 302.7km."

However, it has been argued the tyre, when raced on, does not have the same circumference as it would if measured stationary in the garage - therefore calculations based on that are fallible.

"Some guys seem to think the tyre shrinks ... and for whatever reason they think we don't do it [300km]," Perkins said.

"But the only way you'll ever find out is by having a police officer down there with a radar gun and measure it.

"If the wind's in the right direction, the engines are now made to work a bit harder through the revs because they're running longer through the rev range - if we can haul enough speed down there we'll definitely be faster and hopefully that's 300 for everyone to get excited about."

Have they or haven't they - will they or won't they? Stay tuned to this weekend's Supercheap Auto Bathurst 1000.