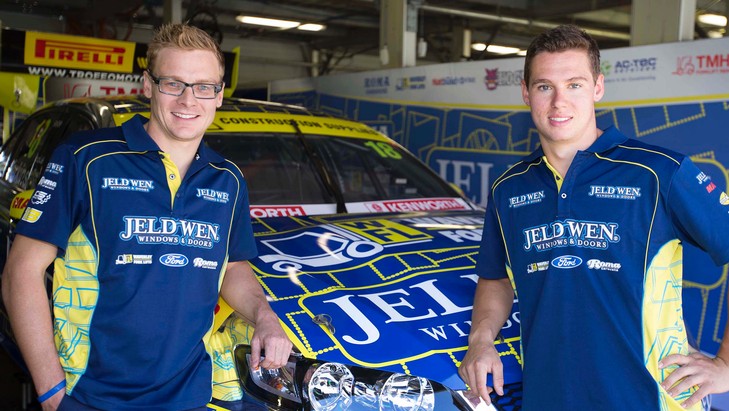 Waters, who drives the Team ENZED FPR Ford in the Dunlop Series, is one of the fastest drivers in the second tier category, having scored ARMOR ALL Pole Position and second position in the first DVS race of the season last night.

Waters has great experience in the V8 Supercars main game endurance races, despite his tender years, having already raced twice in the 1000km Bathurst classic.

After winning the 2011 Australian Formula Ford Championship, he debuted in V8 Supercars at Bathurst the same year, after winning the inaugural Shannons Supercar Showdown. He competed again the following year alongside 2012 Showdown winner Jesse Dixon.

Waters is excited about being given the opportunity to again compete at the Supercheap Auto Bathurst 1000, especially in a factory-back Ford.

“What a weekend! I’ve made my debut for FPR in the Development Series, taking pole position and a podium, and to then be announcing that I’ll be racing alongside Jack Perkins in the Team JELD-WEN Ford is unbelievable," Waters said.

"2014 is proving to be a spectacular year! It’s so great to be able to lock this in early in the year, so I can maximise my time in co-driver sessions and test days.

“Now I’m going to focus on doing my best in the DVS, getting plenty of miles under my belt and being at my absolute best at Sandown, Bathurst and the Gold Coast 600 for Team JELD-WEN.”

Car 18 driver Jack Perkins is very happy to be partnered with the fast 19-year old for his PIRTEK Enduro Cup challenge.

“Cam is a great young guy, and has already proven at Clipsal this weekend that he’s one of the fastest guys in the DVS," Perkins said.

"The fact that, at only 19 years of age, he has already raced in the Bathurst 1000 twice is fantastic. He knows what the race is about, and understands what is required to get to the finish line.

“I was only just making my debut at Bathurst at his age, so he’s got some great experience. I’m looking forward to working with him throughout the year, and honing our partnership ahead of the start of the endurance series at Sandown in September.”

“Being able to secure Cam is a real boon for us at Team JELD-WEN. Cam and Jack have struck up a great friendship, and have a very similar driving style, so we’re really looking forward to some great results in the endurance races later this year,” Schwerkolt said.

Meanwhile, the first race of the season is not far away, beginning at 4.20pm local time.