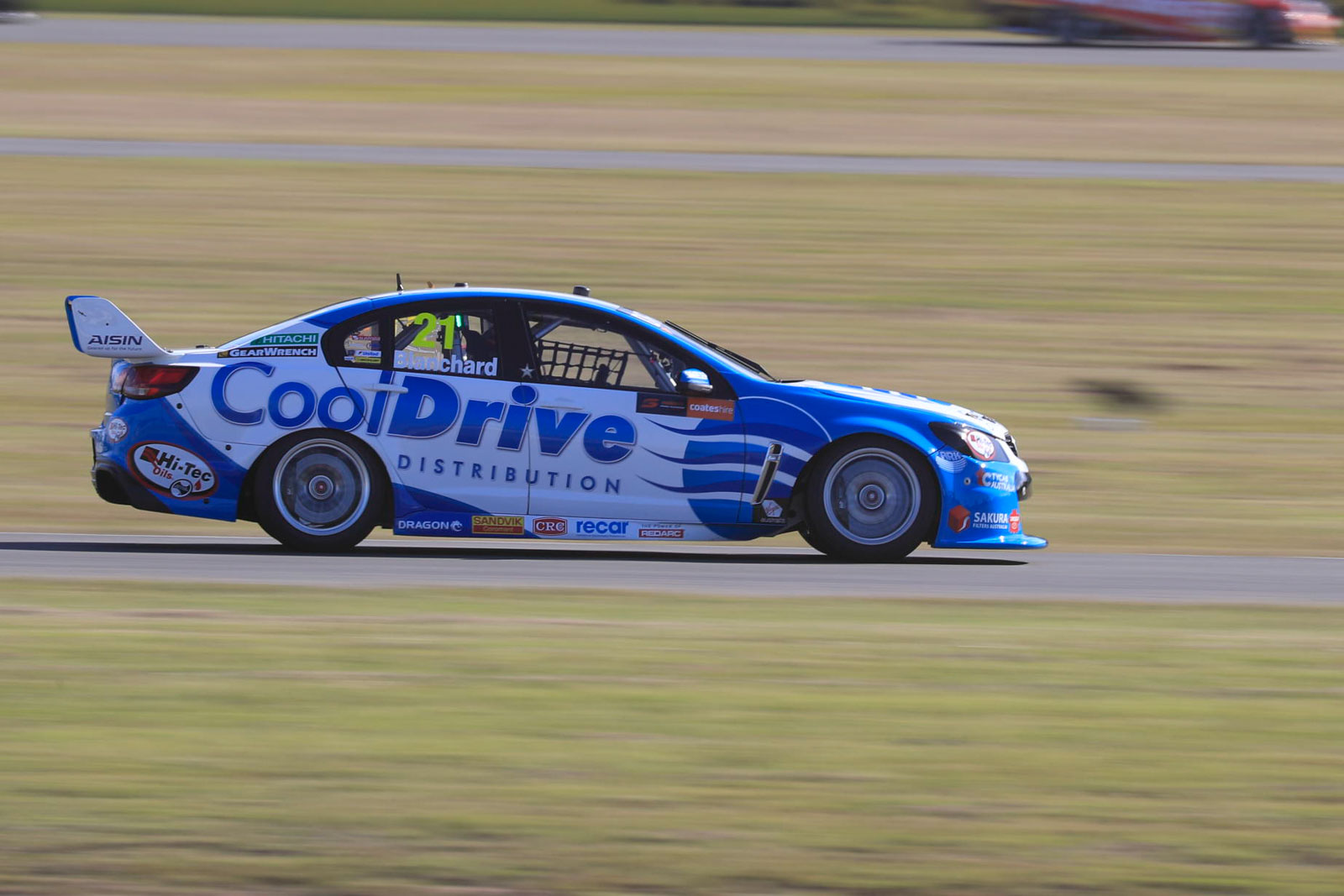 Lap record threatening pace has been the highlight of a strong day of testing at Winton for Brad Jones Racing, with star drivers Tim Slade and Jason Bright both showing great form.

In a day marked by few run-offs or incidents, Tim Blanchard’s Team Cooldrive Commodore caused the main concern because of a sudden drop in engine oil pressure.

But after being towed back to the pits the problem was found to be only minor and the car was soon back out circulating again.

That incident certainly didn’t put a dampener on team owner Brad Jones’ mood at the end of the day. He was clearly pleased with the progress the team made with a mammoth program that included two days of running for BJR’s three Dunlop development series Commodores as well as today’s outing for the three Virgin Australia Supercars Championship entries, comprising the Freightliner Racing, Team BOC and Team Cooldrive Holdens.

“I thought we were pretty speedy today, Tim and Brighty were doing 1 minute 19s,” confirmed Jones. DJR Team Penske’s Fabian Coulthard reset the race lap record at a 1 min 19.7092 sec last May at the Woodstock Winton SuperSprint, which Slade dominated with two wins.

“It’s been a massive test which has actually been really good, Jones added. “We have gotten through a lot of stuff and while it’s hard to know if you make a lot of progress we have certainly tried a lot of gear and we feel pretty happy about the way we have come out the other side of it.

“It’s an opportunity without the pressure of race meeting to quantify some things that you want to have another look at and check and double-check. These days are good for that sort of thing.”

Erebus Motorsport team boss Barry Ryan said he was pleased with the form Davies showed in his first serious hit-out in the car he had originally been slated to co-drive in the Pirtek Enduro Cup with its previous VASC steerer Aaren Russell.

“He has got really good natural ability and we went through a program of stuff we would have tested if Dave (Reynolds – the other Erebus driver) was here,” confirmed Ryan. “He was either going to sink or swim and he swum.

“He was doing respectable times and he gave good feedback and we learned a hell of a lot more than we thought we would on a rookie day.”

Davies, who had been racing a previous generation Ford Falcon FG in the DVS until the deal to join Erebus in the VASC came together, had his first two runs on Dunlop soft tyres today. His debut main game outing at the August 26-28 Red Rooster Sydney Motorsport Park SuperSprint will be conducted entirely on softs.

“The soft tyre and the way it comes off the corner compared to my FG and the hard tyre we use in the Dunlop series is probably the biggest difference I have encountered today,” Davies said. “Getting my head around that has probably been the hardest part.

“I had a second green tyre right at the end of the day which really helped. I found a big chunk of time on the second run.

“It was really good but I am going up against guys who use six sets of soft tyres every race weekend and I’ve just used my second, so it’s early days. But I am very encouraged and so is the team.

“I can’t wait (for SMSP). I will be counting the days, hours and minutes until I am on the plane to Sydney. I really enjoy that track, I have had a pole positon in Carrera Cup there previously so it is a happy hunting ground for me and hopefully that bodes well.”

Erebus will now work through the weekend to bring the #4 Commodore up to the same specification as the #9 Penrite Commodore raced by Reynolds. Included in that upgrade will be the fitment of the carbon-fibre E-Cell seat.