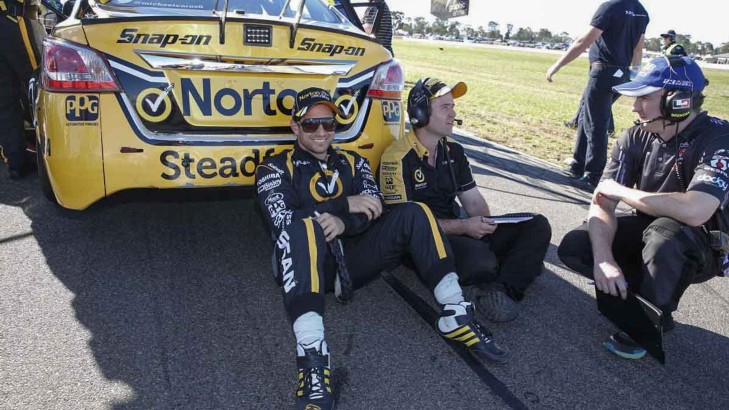 If you could pair up with any main game driver at Bathurst, who you haven't driven with before, who would it be?

"Probably Courtney. He's always pretty fast up there, he goes really well there -he probably hasn't had the best luck in the past. I've known him for a long time, so I reckon we'd get along pretty well."

Last sporting event/concert/gig you have attended as a fan?

"I'm going to Justin Timberlake ... I went to an A-league game, I think against Melbourne Heart here in Melbourne -I go to a lot of soccer games, so I often forget them, especially if we didn't win!"

"Yes I do, it is definitely homemade pizza. My favourite, to be honest, is just ham and cheese. It's not hard, but I like to make the base, get all the hard stuff done, make the sauce, which is nice ... I'm pretty lucky being brought up with an Italian background. I think I just use a lot of the stuff I've been taught, because you can use a lot of the knowledge in the kitchen.

"We make our own sauce, so I guess you can say it's traditional sauce, rather than straight out of a can ... we do salami and stuff, so I try to get up with the family when they do that, a couple of times a year."

Dale Wood's question from last Fast Five -if you were competing in the Winter Olympics, which sport would it be and why?

"I'm trying to think what they've got. There's one where they race each other and they're on snowboards and they've got a little track - snowboard cross. Because it's racing, and Australia needs more medals.

"Do I have to think of a question for someone else?"

"If you could meet someone famous, who would it be and why? Not dead or alive - someone alive. Someone more famous than yourself!"

Michael Caruso, paired with Dean Fiore at the Supercheap Auto Bathurst 1000 will be running a retro livery at the larger-than-life event. See the Norton Nissan on-track from October 9-12.

Michael Caruso  ›
15' Nissan Motorsport ›
2014 Supercheap Auto Bathurst 1000  ›
Stay In The Know
Sign up to the Virgin Australia Supercars Championship Newsletter
We use cookies to ensure that we give you the best experience on our website. If you continue to use this site we will assume that you are happy with it.Ok