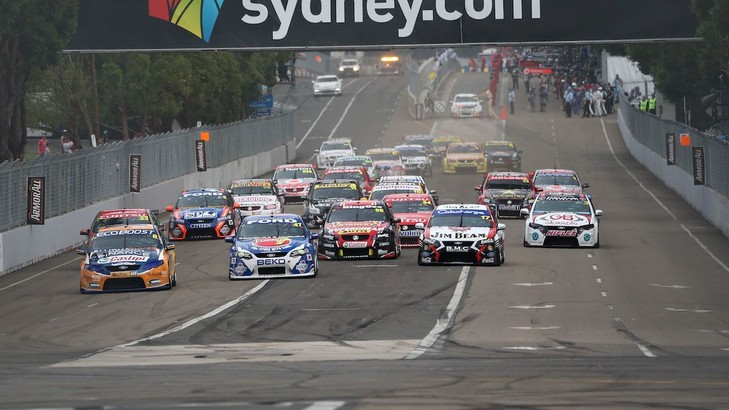 1. Jamie Whincup may lead the V8 Supercars Championship by 20 points with just the Sydney NRMA Motoring and Services 500 remaining, but he’ll have to overcome a terribly poor record on the streets of Olympic Park if he’s to win his fifth Championship and join the late Ian ‘Pete’ Geoghegan, Dick Johnson and Mark Skaife on the exclusive list of five-time champions.

Whincup has never finished on the podium, let alone won a race in the four-year (and eight race) history of the event.

Sydney Olympic Park remains the only circuit on the 2013 calendar where Whincup has never scored a race win in his V8 Supercars Championship career. His best finish is fifth place – four times – and he’s also yet to score an ARMOR ALL Pole Position on the tricky street circuit.

On the flipside, his teammate Craig Lowndes has finished in the top two in the last four Sydney races, winning the Saturday race in both 2011 and 2012.

Lowndes also remains the only driver to finish all 34 championship races this year following Jonathon Webb’s retirement from the last race at Phillip Island.

2. James Courtney will miss the Sydney NRMA Motoring and Services 500 – and his first V8 Supercars Championship event in seven years – due to injuries sustained in the massive accident that destroyed his Holden Racing Team Commodore at Phillip Island.

Courtney has competed in 111 consecutive V8 Supercars Championship events since his full-time debut at the 2006 Clipsal 500 with Stone Brothers Racing.

He is the only driver to have finished all eight Sydney 500 races held since 2009, though will be replaced for the weekend by HRT endurance driver Nick Percat in a brand new car to replace the Commodore destroyed at Phillip Island.

3. The Sydney NRMA Motoring and Services 500 has quickly become the most unpredictable event on the V8 Supercars Championship calendar.

There has been only one repeat winner across the eight races held since 2009 – Craig Lowndes – with seven different drivers (Garth Tander, James Courtney, Jonathon Webb, Lee Holdsworth, Lowndes, Mark Winterbottom and Will Davison) on the streets of Sydney.

An amazing 15 different drivers have finished on the 24 available podium positions in those eight previous races.

4. The 3.42-kilometre Sydney Olympic Park street circuit has also gained a reputation as a real car-killer.

On average, just 68.4 per cent of all starters manage to finish races at the event with the most finishers in a race being 23 (from 29 starters) on Sunday in 2010.

The average number of cars on the lead lap in each race is 14.6 so, in essence, half the field is generally lapped in a Sydney 500 race.

5. Fujitsu Garry Rogers Motorsport will make its final start racing Holden Commodores at the Sydney NRMA Motoring and Services 500 before it become the works Volvo Polestar Racing team for 2014.

GRM debuted in the ATCC/V8 Supercars Championship in its present form in 1996 and has raced Commodores across 232 championship rounds and 544 races.

It has claimed a total of 17 Championship race wins – including a Bathurst victory in 2000 – and eight pole positions during that time.

6. A V8 Supercar race at Sydney Olympic Park is yet to be run without the appearance of the Pedders STP Chrysler Safety Car at some stage.

On average there have been 3.5 Safety Car periods in the eight races held so far – the most was five in the wet Saturday race in 2010 and the least was two on Sunday last year.

7. While Red Bull Racing Australia’s drivers compete for the Drivers' Championship, the team is also within sight of claiming its fifth Teams' Championship in the last six years.

RBRA lead the Pepsi Max Crew FPR Ford squad by 342 points with 576 points available across the last two races of the season in Sydney.

The only team to beat RBRA (Triple Eight) in that time is the Holden Racing Team, which won the Team’s Championship in 2009.

8. The first year of the New Generation cars in the V8 Supercars Championship has delivered some impressive numbers, which are worth reflecting on ahead of the final event of the season.

There have been a total of 13 different race winners (excluding endurance co-drivers) and 16 different podium finishers in the 34 races held so far this year.

All up, 21 drivers have scored top five finishes while all 28 full-time drivers have finished in the top 10 at some stage this year.

9. Four drivers will make their Sydney NRMA Motoring and Services 500 debuts at this year’s season finale, though three of them featured prominently in last year’s Dunlop Series round at the circuit.

Nick Percat has competed in Sydney in the Dunlop Series for the last three years in a row. He finished second in the 2010 and 2011 rounds.

Scott Pye won last year’s Dunlop Series round at Sydney Olympic Park and is coming off a career-best seventh-placed qualifying effort at Phillip Island, while Chaz Mostert has also competed in the Dunlop Series in Sydney and finished fourth overall in both 2011 and 2012.

The other Sydney 500 debutante is SP Tools Racing’s Maro Engel in the #9 Mercedes-Benz AMG E63.

10. Dale Wood looks set to clinch the Dunlop Series at Sydney Olympic Park with the final round of the development category acting as the main support to the Sydney NRMA Motoring and Services 500.

MW Motorsport driver Wood leads Ash Walsh by 228 points with just 300 left available over the course of the two-race weekend.

Should Walsh win Race 1 in Sydney, Wood would only need to finish 11th or better to clinch the second series win for MW Motorsport, which also won the crown in 2009 with Jonathon Webb.

Wood is driving the same ex-Ford Performance Racing Falcon used by Will Davison to win the Sunday race at last year’s event.

Tickets are still available for the Sydney NRMA Motoring and Services 500, which kicks off Friday December 6.