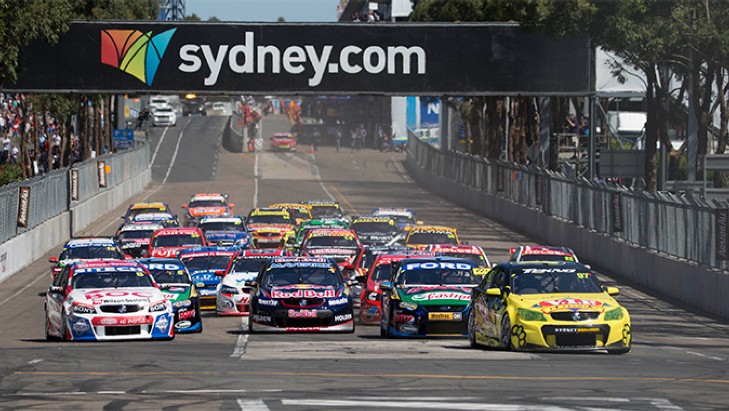 1. While Jamie Whincup is champion elect for 2014, the fight for second will be raging at the Sydney NRMA 500 between Mark Winterbottom, Craig Lowndes and Shane van Gisbergen.

Despite often being labeled a regular championship bridesmaid, Ford's Winterbottom has only finished runner-up once - back in 2008.However he has been a regular contender and has never finished outside the top five in the final pointscore since joining Ford Performance Racing in 2006.

Lowndes - third and 95 points behind Winterbottom - is trying to help Red Bull Racing Australia and Triple Eight achieve the historic feat of its fourth 1-2 championship finish in successive years, which has never before been achieved by a team in 55 years of ATCC/V8SC history.

Van Gisbergen - fourth and 39 points behind Lowndes - could improve upon his best-ever championship result. His previous best was fourth in 2011 with Stone Brothers Racing.

2. Marcos Ambrose will make his first V8 Supercar Championship appearance in just over nine years at the Sydney NRMA 500.

There are a total of 13 drivers in the Sydney field that have never lined up on a V8 Supercar grid with the two-time champion who has a career total of 28 V8SC race wins, 18 pole positions and 30 podium finishes from 65 round starts between 2001 and 2005.

Ambrose will run the #66 on his DJR Falcon, a number which has double meaning.

Sydney will be his 66th V8 Supercar Championship round start and #66 is also the number carried to victory in the 1972 Indianapolis 500 by Mark Donohue - the first victory in the famed race for Roger Penske, who becomes a controlling partner in the team next year.

Sydney will be the first time Dick Johnson Racing has run three cars in a V8SC round since 2002 at Eastern Creek (Steven Johnson, Paul Radisich and Greg Ritter).

3. The Sydney NRMA 500 has become the most unpredictable round of the V8 Supercar Championship with an amazing nine different winners in the 10 races held since 2009.

Craig Lowndes is the only repeat winner on the streets of Sydney Olympic Park (2011 Saturday and 2012 Saturday).

Fourteen different drivers have claimed the 30 available podium positions in those 10 races.

4. For the first time in its history this year's Sydney NRMA 500 will consist of three races rather than two.

A pair of 125-kilometre races will be held on Saturday with a 250-kilometre finale on Sunday as part of the new-for-2014 Super Street format also used at the Clipsal 500 and Castrol Townsville 500.

Holden is undefeated in V8 Supercar street racing this year with Commodore pilots winning all eight championship races held in Adelaide and at Townsville and the Gold Coast.

5. The 3.42-kilometre Sydney Olympic Park layout has developed a reputation as the biggest car-killer on the V8 Supercar Championship calendar.

On average, only 71.5 per cent of all cars that start a V8 Supercar race there actually finish and, of those that don't finish, just over 50 per cent are eliminated by accidents or accident damage.

Last year's Sunday race was the first time a Sydney 500 race had been completed without a car retiring due to an accident or accident-related damage.

The Kiwi has finished on the podium in five of the last seven races there since 2010, consisting of four third-places and a win (2013 Sunday).

7. No Sydney NRMA 500 race has yet been run without the appearance of the Pedders SRT Safety Car at least twice.

The average number of Safety Car appearances per race over the event's five-year history is 3.4 with the most - five - in the 2010 Saturday race.

8. The New Generation V8 Supercar has again delivered a wide variety of winners this year with 11 different primary drivers claiming race victories to follow on from the 13 that won in 2013.

Wood is the only one of the three to have competed at the circuit before - he finished on the podium in 2012 in the Dunlop Series and won the title there last year.

10. The Dunlop Series concludes at Sydney Olympic Park with Paul Dumbrell champion elect, 304 points in front of Ash Walsh with only 300 available in the final round.

With victory in the last two rounds at Queensland Raceway and Bathurst, Dumbrell is attempting to become the first driver since Andrew Thompson in 2011 to win three Dunlop Series rounds in a row and the first to win four individual races in a row since Jonathon Webb in 2009.

Just as in the V8 Supercar Championship, the battle for second in the series is where the real interest will lie in Sydney with just 119 points separating Walsh, Cameron Waters, Chris Pither and Andre Heimgartner (who was on Friday announced as Super Black's main game driver for the 2015 season).

Tickets are still available for this weekend's Sydney NRMA 500 - click here for more information on the event, which is the V8 Supercars' 2014 grand finale.