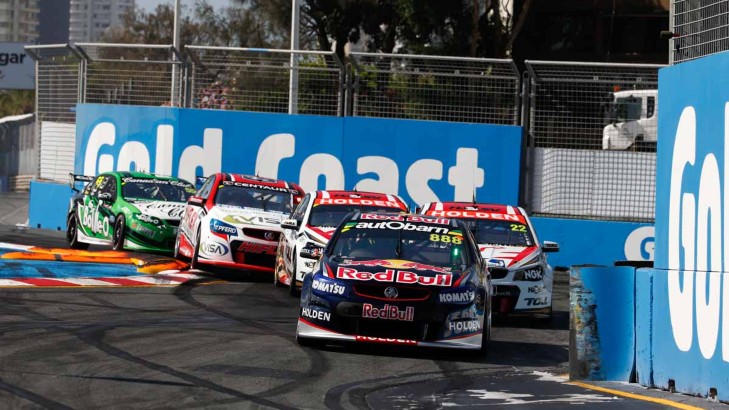 1. Three teams - Triple Eight Race Engineering, Walkinshaw Racing and Ford Performance Racing - have dominated the last decade of V8 Supercar racing on the Gold Coast.
The trio has won the last 21 races in a row between them on the tough street circuit.
The last time a race was won by a team outside of those three teams was Race 1 in 2005 (Greg Murphy for PWR Racing).
In that time, Triple Eight has nine wins, Walkinshaw Racing seven and FPR five (though one of these - David Reynolds and Dean Canto's win last year - is officially credited to Rod Nash Racing, whose entry is run by FPR).

2. Ford Performance Racing's victory in the Supercheap Auto Bathurst 1000 with Chaz Mostert and Paul Morris created all sorts of records and amazing statistics.
It moved FPR to fifth on the all-time list of race wins for teams in championship history on 48, leapfrogging Gibson Motorsport in the process and leaving FPR just two behind fourth-placed Kmart Racing/HSV Dealer Team, which won 50 races from 2001 to 2008.
It gave Morris his first V8 Supercar race win - and podium finish - since Calder 2001, when partner Mostert was just nine years old!

3. The Holden Racing Team's Greg Murphy will celebrate his 200th Australian Touring Car Championship/V8 Supercar Championship round start on the Gold Coast.
The New Zealander becomes just the 10th driver in championship history to reach the mark in a career that began at Calder Park in Melbourne in 1997 with HRT.
Murphy will become the first non-Australian driver to compete in 200 ATCC/V8SC rounds and has claimed 28 race wins - the last came on the Gold Coast way back in 2005.

4. Norton Hornets Nissan driver Michael Caruso will be making his 100th ATCC/V8 Supercar Championship round start on the Gold Coast.
The 2009 Darwin race winner made his championship debut at Bathurst in 2006 as a last-minute call-up for Brad Jones Racing and has been full-time in the championship since 2008.
He becomes just the 39th man in championship history to join the '100' club.

5. Despite running low on fuel in the closing laps of Bathurst and missing a chance to claim the Peter Brock Trophy, Jamie Whincup and Paul Dumbrell still lead the race for the Pirtek Enduro Cup - the award given for the best-performed combination across the endurance races.
They lead with 522 points, however Bathurst winners Chaz Mostert and Paul Morris have come storming into contention and now sit second with 492 points.
James Courtney/Greg Murphy are third from Craig Lowndes/Steve Richards and Mark Winterbottom/Steve Owen.

6. This year is the 20th time V8 Supercars have raced on the streets of the Gold Coast since their first non-championship appearance at what was then known as 'Indy' back in 1994 (which was also prior to the category being known as V8 Supercars).
The event became a part of the V8 Supercar Championship in 2002 so this year is the 13th time it has counted for championship points and the fifth time the '600, two-driver endurance format has been utilised - it first appeared in 2010.

7. Volvo will make its first appearance in a Gold Coast V8 Supercar Championship race this year, but the manufacturer has high-profile racing history at the event from its last appearance there 18 years ago.
The great Peter Brock raced a factory-backed 850 Sedan in the two-litre Super Touring support races at the 1996 Gold Coast Indy in addition to his V8 commitments with the Holden Racing Team on the same weekend.

8. Only three drivers - Jamie Whincup, Mark Winterbottom and Shane van Gisbergen - have finished each and every one of the 30 races held so far in the 2014 V8 Supercar Championship.
On the flip side, Tim Slade and Robert Dahlgren have had the most failures to finish this season - six each. Both also failed to start races at Sydney Motorsport Park due to accident damage - Slade two and Swede Dahlgren one - making it a difficult season so far for both drivers.

9. Three drivers - Alex Buncombe (Jack Daniel's Racing), Cameron Waters (Team JELD-WEN) and Robert Dahlgren (Valvoline Racing GRM) - are making their first start in a V8 Supercar on the streets of the Gold Coast.
Waters, however, has raced there before. He finished runner-up to Chaz Mostert in the 2010 Australian Formula Ford Championship round on the Gold Coast and also raced there in 2011 - the year he won the championship himself.

10. Three Castrol EDGE Gold Coast 600 co-drivers - Warren Luff, Steve Richards and Craig Baird - will be on double duty in Queensland as they fight for the Porsche Carrera Cup championship in addition to their V8 Supercar commitments.
In the closest title fight in the category's history, just 34 points covers the three coming into the last round with Luff leading Richards by 21 and Baird another 13 points behind in the chase for his fifth consecutive Carrera Cup crown.