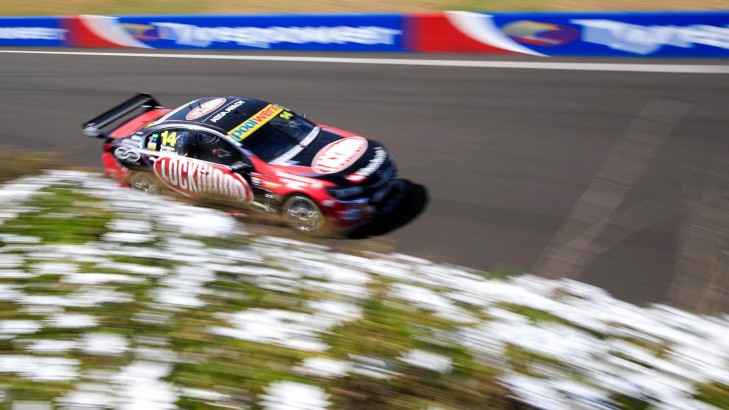 An intense qualifying session has unfolded at the Supercheap Auto Bathurst 1000, with Lockwood Racing's Fabian Coulthard landing provisionalARMOR ALL Pole Position with an amazing 2min05.6080 lap around Mount Panorama.

Another amazing feat for Brad Jones Racing saw Dale Wood in the ADVAM Commodore cross the line as the last car on-track - and will find himself starting from third tomorrow.

In the closing seconds, Shane van Gisbergen and Jason Bright had a drag race over the line, but neither could better Coulthard, who has been known for a huge crash at the circuit - until now.

"Track lap record... it takes a bit to get me excited, but I'm excited!" Coulthard said.

"It's a tough lap. The way the surface is you've really got to commit. There wasn't a hell of a lot left in that lap - you have to win it or bin it."

Van Gisbergen was the only other to make it into the '05s', just 0.09 seconds behind Coulthard.

Wood was third, with Mark Winterbottom - who broke the lap earlier in the day in practice, and sat at the top of the session for the majority - in fourth.

And some big names missed out - James Courtney 11th, Chaz Mostert 14th - and the other biggest story of the day, Championship leader Jamie Whincup crashing out mid-session.

David Reynolds also had a big accident early in the run - the two will start from the last row, with the teams' early assessment that the cars will be fixed for Sunday's race.

Starting order for the top 10 will be decided in tomorrow's ARMOR ALL Top 10 Shootout at 5.10pm local time.

Championship leader out of Bathurst Qualifying

Murphy's thoughts on the 2min05