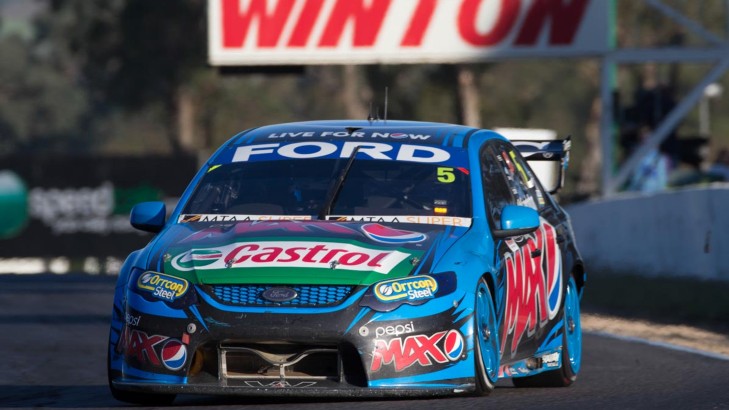 No Falcon has qualified on ARMOR ALL Pole Position this year and only V8 Supercars Championship leader Mark Winterbottom has started from the front row (twice).

Winterbottom claimed the last Falcon pole 24 races ago in November 2013 at Phillip Island.

As he told v8supercars.com.au last week, finding the green (brand new) tyre speed to qualify at the front of the grid consistently could prove crucial to him and FPR claiming their first Championship.

The upside for the Falcon has been the best soft tyre performance on the grid and excellent wear on either compound, helping Winterbottom win three double points SuperSprint mini marathons and Pepsi Max teammate Chaz Mostert another.

"Hopefully we might have unlocked some qualifying pace for our car," FPR team boss Tim Edwards told v8supercars.com.au.

All four Falcon FG IIs that operate out of FPR's Campbellfield headquarters ran at the northern Victorian circuit, with the four regular drivers and their Pirtek Enduro Cup co-drivers having stints at the Winton test day, also attended by Brad Jones Racing and Lucas Dumbrell Racing.

Edwards revealed that while teams tend to use well worn Dunlop control tyres for testing, some near-new rubber was sacrificed at Winton in search of qualifying pace.

"We didn't run green tyres, but we did run some better tyres," Edwards said. "It's not the perfect way to try and unlock qualifying pace from the car but you have got to deal with the deck of cards you have been given.

"Some of it is just the characteristics of the car and you can read that whether it is on old tyres or new tyres.

"When you drive out on an old tyre or new tyre when it is cold you certainly get a different characteristic from the tyre depending on how the car is set up, how quickly the tyres warm up etcetera."

The Falcon's issues are believed to relate at least in part to a lack of rear aerodynamic downforce and therefore grip, something Edwards acknowledged.

"It is what it is. It would be great if we could just dial on a few more degrees rear wing but we can't, so there is no point stressing about it.

"We will just push on trying to dial it out mechanically."

Edwards said there was work on qualifying setup going on across all four Falcons.

"It's a characteristic of the car and all the engineers have ideas on how to dial it out. Our cars are all quite similar and they are all suffering with similar handling issues.

Irrespective of the Winton test, Edwards predicted a strong performance from the FPR squad at the Coates Hire Ipswich 400 at Queensland Raceway on August 1-3. In 2013 Mostert led home a Falcon sweep in one race when driving for FPR customer Dick Johnson Racing.

DJR tests at QR on Wednesday and Edwards said there would be some information traded, which could help both operations.

"We know what they were doing and we know what they are doing, so I suppose it doesn't hurt. But more often than not, when the Queensland teams come to Winton they kick our arse and when we go to Queensland Raceway we kick their arse.

"I don't think there is any home-ground advantage, I think it almost works against you. Sometimes you think 'we know this track like the back of our hand, we know the demon setup' and you are probably not as responsive as you need to be."