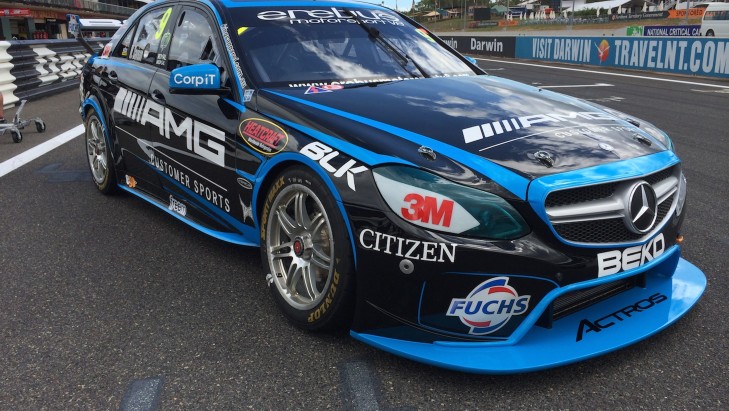 Erebus Motorsport will run AMG Customer Sports branding on both E63s for this weekend's SKYCITY Triple Crown in Darwin.

The AMG logo features on the doors and bonnets of the Mercedes-Benz AMG E63s of Will Davison and Lee Holdsworth.

According to the team, the stickering illustrates the ongoing discussions between the parties regardinga deal moving forward.

"The discussions we are having with AMG Customer Sports in relation to a renewed partnership are very, very positive," team boss Ryan Maddison said.

"We talk to them on a a very regular basis - and over the last couple of weeks we've been in discussion about what the future of the relationship looks like...

"The addition of the AMG logo to our cars for this weekend's racing at Hidden Valley is a representation of how those discussions are going."

There has been speculation Erebus was looking elsewhere for support for 2015, after debuting the Mercedes-Benzes last year without AMG backing.

However, Maddison continued to reiterate the discussions between the two were positive and the gesture was to signify that.

The team achieved its first V8 Supercars race win in its Erebus guise earlier this season at Winton, with Holdsworth scoring what he said was an unexpected victory.

Maddison played down the impact of that winon the relationship.

"The results all year - our results everytime we run, from practice sessions, qualifying and races - are always a talking point... so there's no doubt the results we've had so far this year have been part of those discussions, but certainly not the most significant factor."

Holdsworth and Davison currently sit 11th and 12th in the V8 Supercars Championship.

See the Erebus E63s in the flesh this weekend at the Hidden Valley event - click here for ticketing information.

Lee Holdsworth  ›
15' Erebus Motorsport ›
2014 SKYCITY Triple Crown Darwin  ›
Stay In The Know
Sign up to the Virgin Australia Supercars Championship Newsletter
We use cookies to ensure that we give you the best experience on our website. If you continue to use this site we will assume that you are happy with it.Ok