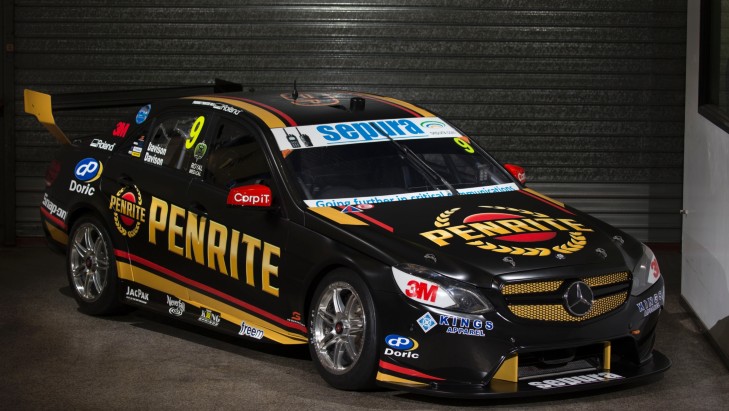 Erebus Motorsport has received a major boost ahead of next week's Supercheap Auto Bathurst 1000 with a new major partnership confirmed with iconic Australian company Penrite Oil.

An aggressive new all-black Penrite livery has today been unveiled on car #9 to driven by brothers pairing Will and Alex Davison to mark the start of a major partnership for Bathurst and an ongoing relationship until the end of 2016.

The striking new livery also features another new sponsor to V8 Supercars in Sepura, which is a global leader in the design, manufacture and supply of digital radio products, systems and applications.

Erebus Motorsport Owner Betty Klimenko welcomed Penrite to the team and said she looked forward to the prospect of growing the relationship over time.

"We have a new sponsor in Penrite Oil on the car from Bathurst onwards, it actually made me quite teary to see a company that believes in what we are trying to do, what Erebus is about, and trusts us to do the best we can," Klimenko explained.

"Having new partners and unveiling new liveries always lifts the spirits of the crew and drivers, and I get a bit carried away with my accessories, it must be the 'girl' in me.

"The atmosphere and the amount of people who watch, attend and see it, here in Australia and overseas is mind bending. I hope that all our partners, new and old, see this as an opportunity to come aboard and get to know the real Erebus.

"We put a lot into our partners and hope that they have fun and feel like a part of the team.

Erebus Motorsport pilot Will Davison said it was a significant boost for he and brother Alex to have the backing of Penrite for Bathurst.

"It's really exciting to be heading to Bathurst with the support of such a reputable Australian brand, like Penrite. It's fitting really that we are racing at Australia's most iconic circuit and motorsport event with the backing of aproud Australian product with 90 years history," said Davison.

"My brother Alex and I had a great result at Bathurst last year infinishing fourth and it would mean the world to both of us and our familyif we could step up on that podium together.

"Even though we didn't end up with the result we wanted at the Sandown500, we took some real positives out of the event and were headed for atop-5 result, so I'm really excited about what's in store for us atBathurst next week."