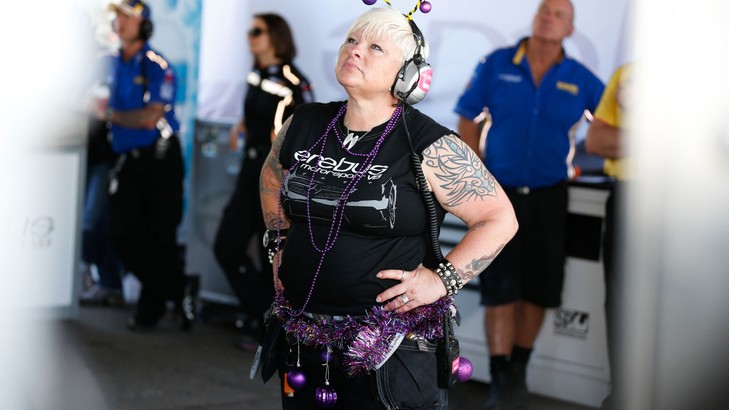 Erebus Motorsport will continue its support for another charity organisation in the build-up to the season-opening Clipsal 500, with the team getting behind NRL legend Brad Fittler’s ‘Hogs for the Homeless’ charity motorcycle ride, which commences on Sunday.

Following on from Erebus team owner Betty Klimenko’s generous $50,000 donation to The Children’s Hospital at Westmead at last weekend’s V8 Supercars Test Day at Sydney Motorsport Park, Erebus Motorsport has come on board as the major partner of the second-annual ‘Hogs for the Homeless’ charity event.

The ‘Hogs for the Homeless’ event is a charity motorcycle ride founded by rugby league legend Fittler, aiming to raise funds to support ‘Father Chris Riley’s Youth Off the Streets’.

Erebus Motorsport team owner Betty Klimenko said she was proud to be supporting another extremely worthwhile cause.

“The Hogs for Homeless ride is such a great event that raises much-needed funds to help young people that are less fortunate than most of us,’’ Klimenko said.

“When I heard about the concept and saw Brad’s passion for creating this event in order to help make a difference, I wanted to support in any way I could.

“On behalf of myself, my family and Erebus Motorsport, we are proud to be getting behind this event and hope that it continues to grow in the years to come.’’

For 12 days, commencing the day after a ‘sleep out’ on Allianz Stadium post the World Club Challenge on Saturday Feb 22, 2014, ‘Freddy’ will lead his mates and former rugby league greats Nathan Hindmarsh and Ian Schubert on an odyssey of mateship, courage and community spirit throughout NSW.

During the 2014 campaign they will be sleeping ‘rough’ in regional centres and rural towns such as Jindabyne, Albury, Cessnock, Tamworth, Tenterfield and Lennox Head. The ride will culminate on Thursday, Mar 6 at ANZ Stadium prior to the commencement of the opening game of the 2014 NRL season between the Roosters and Rabbitohs.

Throughout the tour they will be conducting coaching clinics for the local children in each town in unison with NRL game development staff, hosting community sausage sizzles and being the emcees for ‘Sports Nights’ at local pubs.

Erebus Motorsport V8 has a reshuffled line-up in 2014, with former Championship runner-up joining Lee Holdsworth in a Mercedes-Benz E63 AMG.