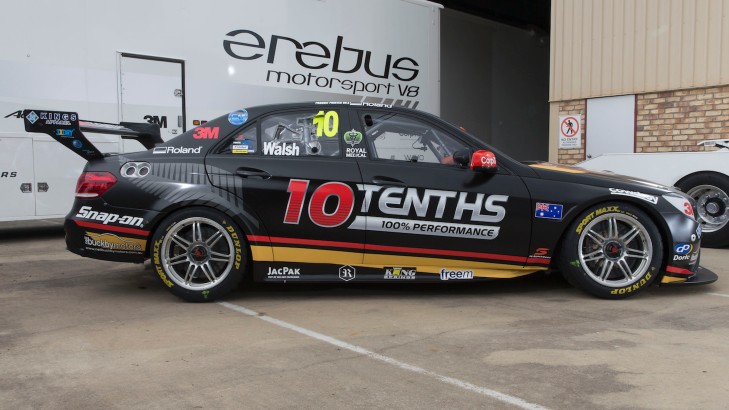 Erebus Motorsport is preparing an 'all black' assault on this week's ITM 500 Auckland, with Penrite Oil unveiling a special 10 Tenths livery for the New Zealand event.

In recognition of Penrite's premium 10 Tenths Racing Oils, the Erebus Motorsport #4 car driven by Ash Walsh will switch to number #10 for the ITM 500 Aucklandin a one-off arrangement that will see the car featured in 10 Tenths branding.

The 10 Tenths branded car will join the regular Erebus Penrite Racing #9 car driven by Will Davison on the grid at Pukekohe, before the Erebus Motorsport #4 reverts back to Wendy's Australia primary backing for the final two events of the year at Phillip Island and Sydney Olympic Park.

Erebus Motorsport Owner Betty Klimenko said it was exciting to see Penrite Oil further embrace its partnership with the team since coming on board at this year's Supercheap Auto Bathurst 1000.

"I think it's fantastic that Penrite will have both of our cars dressed in black for New Zealand," said Klimenko.

"Since the start of our partnership, Penrite have really engaged with our team and the fans which is really great to see.

"Given all the positive comments we've had about the Penrite livery since Bathurst, I'm sure the fans are going to love seeing the two Penrite cars lining up on the grid in New Zealand."

Penrite Oil General Manager Toby Dymond said the addition of the 10 Tenths livery was an exciting venture for the Auckland event.

"It's a fantastic opportunity For Penrite to showcase our company and our specific 10 Tenths Racing products at an international race event across the livery on two V8 Supercars cars,'' said Dymond.

"While Penrite are 100 per cent Australian owned and operated, we have been available in New Zealand for over 30 years across both the north and south islands. Currently we are servicing over 1000 retailers and workshops throughout New Zealand."

This weekend marks Walsh's first time in a V8 Supercar at the Pukekohe circuit.