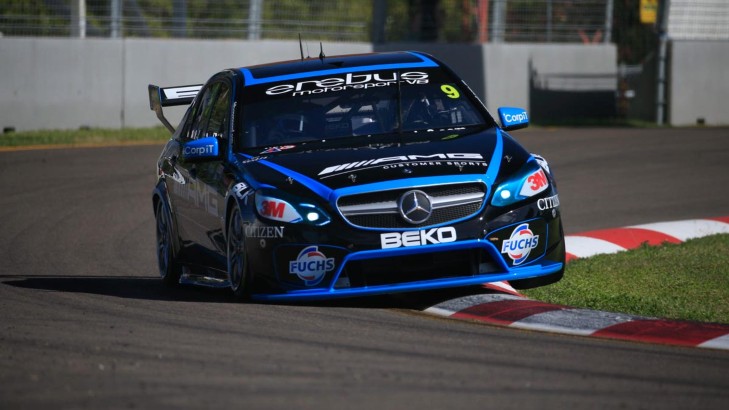 Lee Holdsworth and Will Davison powered to the top of the timesheets in Friday practice at the Castrol Townsville 500 -Driven by TAFE Queensland using engines featuring the first internal parts developed locally by Erebus Motorsport V8 rather than technical partner HWA in Germany.

New lighter flywheels in the 5.0-litre M159 V8 engines of both Mercedes-Benz E63 AMGs are designed to improve response throughout the range, which has been an issue for the cars since they first debuted in the Championship in 2013.

But the flywheels are only the first step in an upgrade of the engines by the Erebus engine shop at Yatala, with a significantly uprated specification due to debut in one of the team cars at the next Championship round at the Coates Hire Ipswich 400 in Queensland in late July. The flywheels will also be lightened further.

The team was keen to play down the significance of the lighter flywheels in terms of Holdsworth and Davison's Friday times, because they were set on green tyres when some teams were holding back their new set for Saturday morning's final practice.

That means the two Erebus cars are likely to tumble down the order this morning. The real test will come in qualifying when all 25 cars will run on new rubber at the same time for the first time.

Davison said the impact of the new flywheel was difficult to gauge but said he and Holdsworth felt it did help.

"We did think possibly we can feel a few little things, maybe up high in the engine acceleration is a little bit better, but it is pure feel at the moment," he said.

"There have been times this year the car has felt great, I have crossed the line and thought that's front row, or front two rows, but we have been eighth, 10th or 12th even. So you know there is free lap time missing somewhere that is just free when you are on full throttle.

"So we are clearly more competitive today so I am hopeful a little bit of it is that free and easy horsepower, but I am not going to jump to conclusions.

"It was always going to be one of those things you can't feel so much."

Davison said he was relishing the prospect of more 'free' horsepower coming online as soon as Ipswich.

"We haven't got the engine upgrades yet and the next step of flywheel stuff, so we have another big step coming," he enthused.

Davison said it was important the team not simply focus on engine power as the solution that would deliver consistent race winning performance.

"We know we have to work on understanding our chassis as best we can because we know even if we have the best engine in the field and the most straight line speed if we are not tuning our car properly we won't have a chance of winning every weekend.

"We have to make sure we do everything in our control to make sure we understand the car as well as can so when we get the extra power we capitalise and gain the results we need."

Erebus CEO Ryan Maddison said it had originally been intended to combine the lighter flywheel with other components to improve engine performance.

"We were hopeful of packaging it with a few other items, but while it was there and we had communicated with V8 Supercars over the last few weeks we saw no reason to delay it any further.

"It's a conservative single step.

"It should allow the engine to be more responsive in the way it spins up and the way it responds to downshifts and gearing and things like that," he said. "Hopefully it just makes the way it pulls out of a new gear or going into the lower gear more efficient."

Maddison said reliability would be a key factor in the decision whether to introduce the new engine specification at Ipswich.

"We have been fairly satisfied with what we have seen so far, but we need more dyno time to make sure we don't have a premature failure on-track."

Your day at the V8 Supercars planned

Will Davison  ›
15' Erebus Motorsport ›
2014 Castrol Townsville 500 – Driven by TAFE Queensland  ›
Stay In The Know
Sign up to the Virgin Australia Supercars Championship Newsletter
We use cookies to ensure that we give you the best experience on our website. If you continue to use this site we will assume that you are happy with it.Ok