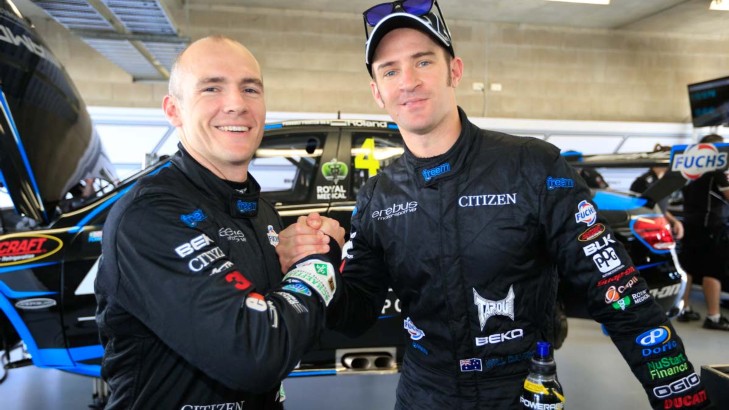 Erebus Motorsport's high profile hunt for commercial support has been met withsuccess, with a major sponsor secured for one of its two Mercedes-Benz AMG V8 Supercars for the remainder of 2014 and the entire 2015 season.

An announcement due before the opening round of the Pirtek Enduro Cup, the September 12-14 Wilson Security Sandown 500, will name the sponsor and reveal whether its brand will appear on Lee Holdsworth or Will Davison's E63 AMG.

"We are in line to make some significant announcements between now and the enduros," Erebus CEO Ryan Maddison told v8supercars.com.au.

While understandably unwilling to reveal too much detail, Maddison did say the team's 2014 black livery would be "unlikely to change too much" with the arrival of the new deal.

"I don't think we will see too much of a palette change," he added.

SNEAK PEAK: We are excited to be launching a sleek new livery for the enduros. Here's a sneak peak of what's to come. pic.twitter.com/lEiMIF3Y2t

The team's finances have been a high profile public issue ever since owner Betty Klimenko went public earlier this season with her concerns about being able to continue to fund the operation beyond 2014.

All three left at the end of 2013; Irwin departed the category while SP and HHA moved to Walkinshaw Racing. Erebus also cut back to running two cars.

The financial picture has become more positive in recent months, with a series of sponsorship deals either renewed or confirmed and Holdsworth committing to a new multi-year deal with the team, pointing towards the financial surety becoming clearer.

Maddison said it was a great achievement for the team, to secure strong sponsorship in a difficult commercial and political climate in Australia and internationally.

"There are a lot of factors that have caused individuals and companies to keep their hands in their pockets, so ... to bring new sponsors into the category and uplift some of those have been very rewarding."

"It's nice to see some really new brands that have never been in the sport before choosing Erebus to partner with," said Maddison. "Before we are even 25 per cent through those contracts we have seen them uplift again, which means they are very satisfied with their cut-through, be it TV, the experience or the team."

Behind the scenes it's also known that Klimenko, Maddison and other members of senior team management, including general manager V8 Ross Stone, have been involved in extensive discussions and strategy sessions and many of the team's financial and structural issues have been addressed

Meanwhile, the issue of what brand of car the team races in beyond 2014 has also been subject of extensive public scrutiny and is yet to be resolved.

Erebus' two-year 'Customer Sports' deal with Mercedes-Benz and AMG expires after this season and the team has been linked to other programs, including Volvo's possible expansion beyond two cars.

It is not known if that situation will become any clearer in the near future.