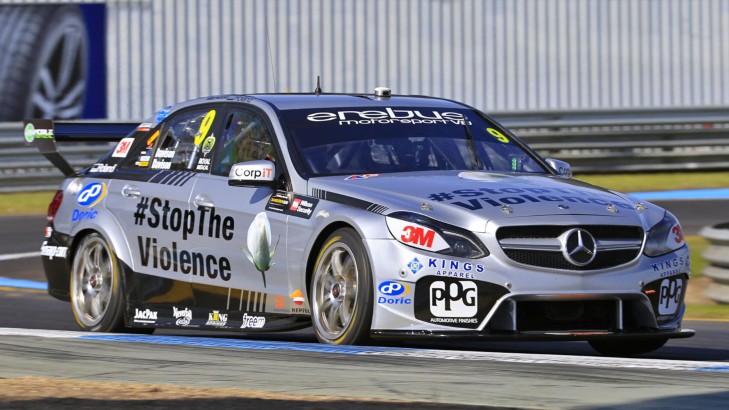 Both Erebus cars have #StopTheViolence wording across the doors placed with a white rose, in an effort to raise awareness at oneof the year's biggest races, the Wilson Security Sandown 500.

"As you know there's been a terrible spate of violence in Queensland and it just seemed like the appropriate time to have a voice," Klimenko told v8supercars.com.au.

"It's ok for people to say how terrible it was, but unless you're ready to put your thoughts [into] ideas ... it's just something I felt I had to do."

Klimenko explained the idea came form technical director Campbell Little, who has three daughters - and she loved it.

The cars ran with blank silver panels in the day's earlier sessions as the stickering was finalised, with co-drivers Ash Walsh and Alex Davison steering the cars in practice three.

"We were waiting for the decals to be done, because it was all very sudden - and it was worth waiting for," Klimenko said.

"For me, I get little shivers every time I look at it."

With many of the teams based in Queensland, Klimenko believed V8 Supercars was the right avenue to communicate her message.

"In collaboration with our sponsors we decided to use the car to push a message through ... it's very close to my heart and I just wanted to make sure the message got across and the media is the best place to do it."