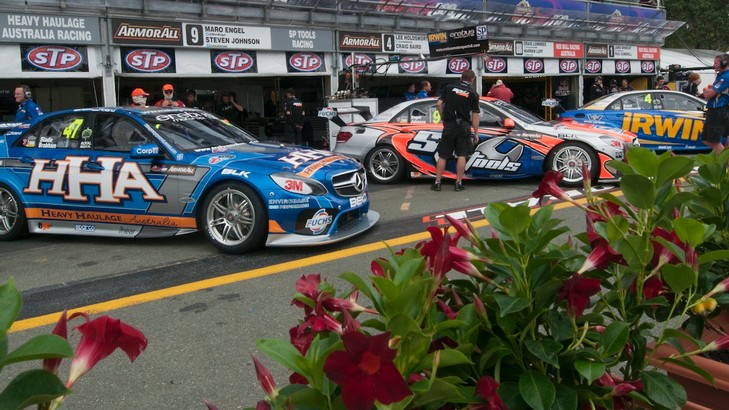 The slimmed down two-car Erebus Motorsport operation is determined to bounce out of the blocks fully competitive at the opening 2014 V8 Supercars Championship event, the Clipsal 500 in Adelaide.

In the wake of the swap to Walkinshaw Racing and Nick Percat of the James Rosenberg Racing Entitlements Contract, Erebus last Friday confirmed it would run two cars rather than the current three in 2014.

It is the latest in a series of changes for the rookie V8 Supercars team owned by Sydney businesswomen Betty Klimenko.

It has a customer sports relationship with Mercedes-Benz’s performance tuning division AMG and has raced E63 AMGs in the 2013 Championship. But the rushed development program has had teething issues and the team has still yet to claim a podium finishing position.

“Our expectations with every piece we are putting together is we will have front-running vehicles as at practice day one at event number one in 2014,” Erebus CEO Ryan Maddison told v8supercars.com.au.

Swapping to two cars also means this weekend’s Sydney NRMA Motoring and Services 500 will be German rookie Maro Engel’s final race as a full-time driver in the Championship. However, Erebus is keen to retain his services for its local and international GT program.

Lee Holdsworth will be the only full-time V8 Supercars driver who continues with the team in 2014, as Tim Slade also departs for Walkinshaw Racing to take over the seat from Russell Ingall in the Supercheap Auto Racing Holden Commodore VF.

The new full-time Erebus driver is yet to be announced.

Engel runs 28th in the Championship with a best finishing position of ninth in Race 19 at Darwin's SKYCITY Triple Crown. But while struggling in the E63 he has shown great form in the Erebus SLS GT3, including pole position in Macau a coupe of weeks ago.

“It has been a tumultuous year for Maro,” said Maddison. “Clearly he is a very skilled operator, but we all knew what makes V8 Supercars so special is it is a very unique category. There is a lot of contact, it’s a unique car to get your head around.

“Obviously Erebus Motorsport has an agreement with Maro right now as a driver and it would be remiss of us to lose a talent like that from a GT perspective considering we are actively pursuing a GT program for the (Bathurst) 12 hour next year and both domestic and international categories.”

Maddison said Erebus was building its own identity after taking over Stone Bothers Racing, its drivers (except for Shane van Gisbergen who departed in controversial circumstances) and commercial arrangements at the end of 2012.

“This gives us the opportunity to go into next season as Erebus Motorsport with very little carry-over from some of the pre-existing relationships,” he said. “There are points of difference we can offer that will play to our advantage.”

Maddison confirmed Erebus had been planning to continue with three cars in 2014 until Rosenberg made his decision. The team then held discussions with other REC holders, but the decision was made that two cars was the appropriate commercial direction.

“We still fielded a number of advances for opportunities outside of James … but it just doesn’t stack up,” Maddison said.

“There is pressure and expectation on ourselves to have a performance structure in place for our program … (It) made sense to call it for what it is and make sure we structure or gear ourselves toward that performance criteria for next year.”

Maddison said a series of sponsorship arrangements had been secured in recent times but the entire 2014 commercial program was not yet locked down.

“Not everything is in place as yet, but it’s been a proud few days for us on the commercial front,” Maddison revealed. “We just want to get ourselves tucked away for the Sydney event and we will be in a position to make further announcements (after that).”

Erebus also plans to take on more of its own development work at its Yatala (Queensland) base, with increased resources committed to the continued improvement of the M159 engine locally rather the relying on AMG and its motorsport partner HWA in Germany.

“Sending engines backwards and forwards – even just the air freight on its own and being reliant on customs clearance and things like that – is an added burden the program can’t sustain, especially given the way the events are stacked in the first seven rounds of next year.

“We need to make sure we are not disadvantaged in any way compared to the other teams.”

However, he made it clear as a customers sports team Erebus would never become 100 per cent technically self reliant.

“They will always want to be involved and it’s not something we would shun. We just need to work out over the next three or four weeks how that physically will work.”