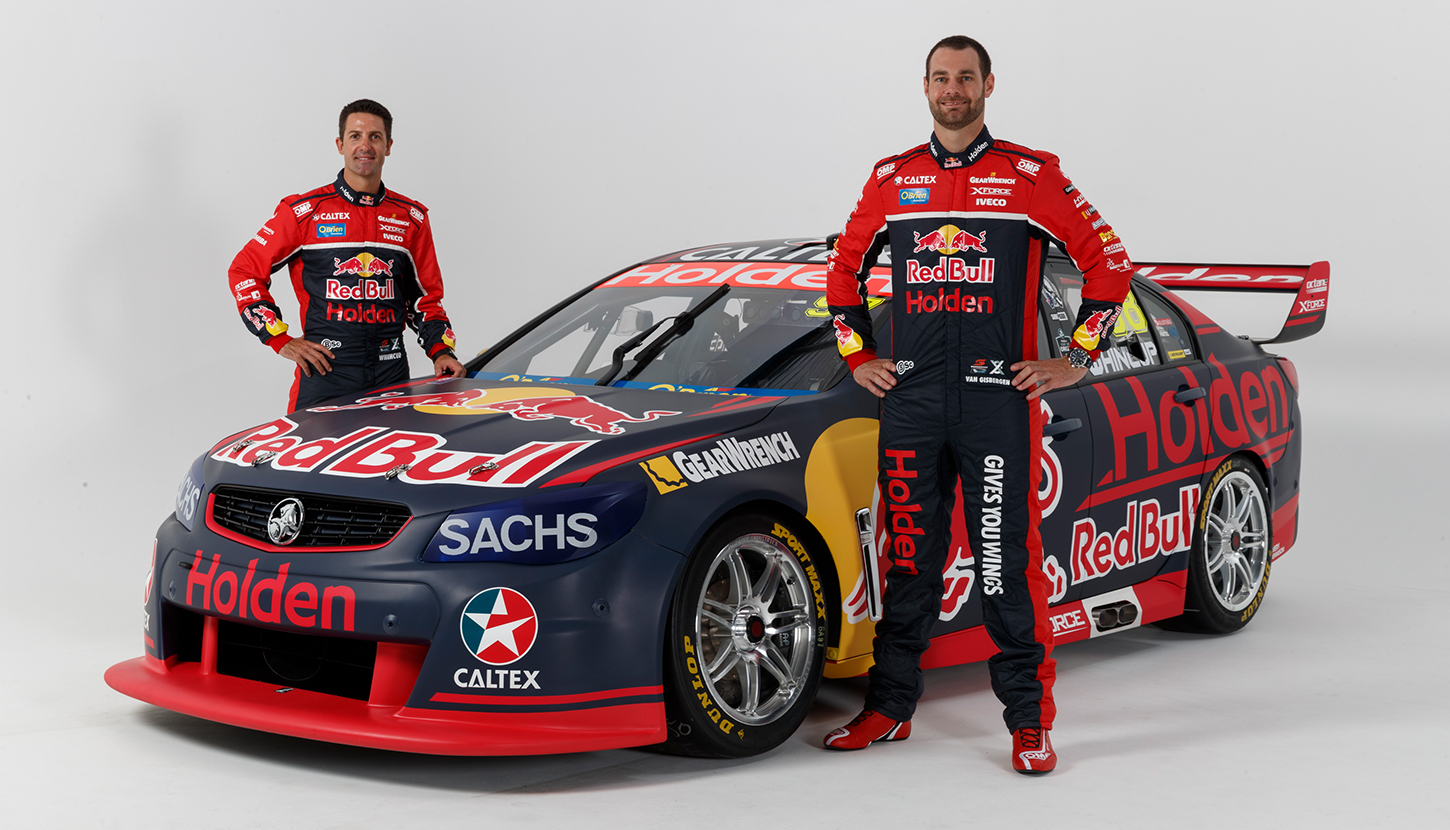 After much anticipation, the Red Bull Holden Racing Team was officially launched today at GM Holden’s headquarters in Melbourne. 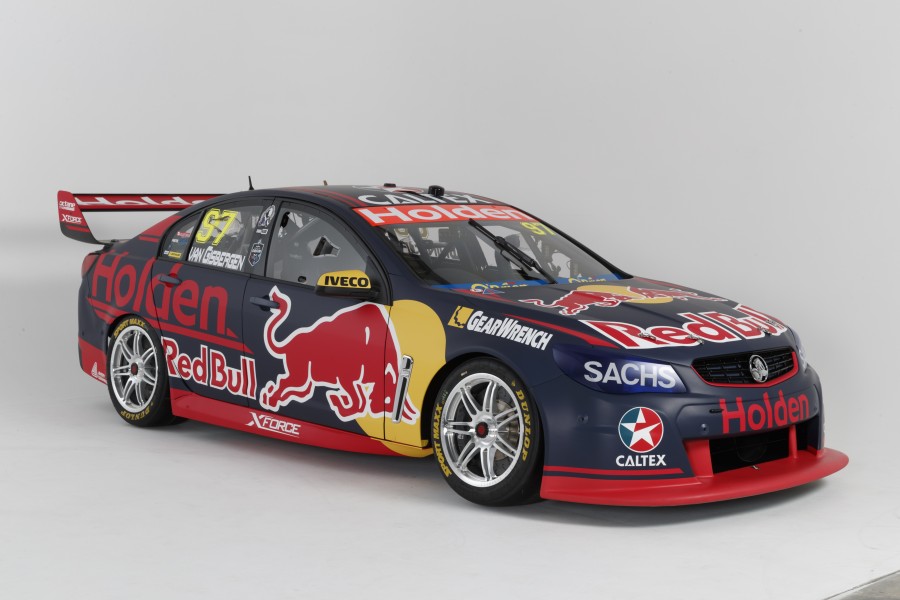 “The history of the Holden brand in Australian touring cars is pretty awesome, so to be a Holden manufacturer driver is pretty special, for it to tie in with Red Bull and Triple Eight is even better."

“This year’s livery is great, and I think it’s a fresh feel for the team, I can’t wait to see how it looks on track.” 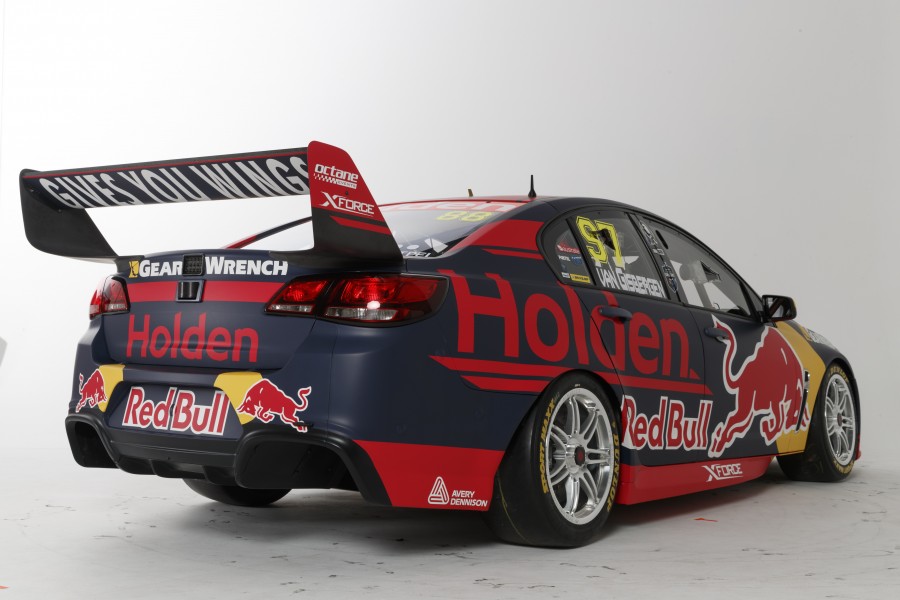 The 2017 Red Bull Holden Racing Team Commodore from the rear.

Jamie Whincup, who has won four of his six championships as a Holden driver, echoed his teammate’s thoughts on the launch.

“It’s a good feeling to know we have the support of Holden and Red Bull as we come into a new era of the sport next year. It’s an exciting time to be a part of the Supercars category, there is plenty of development on the horizon."

“To know that we have the strength of these two brands behind us, as well as our other team partners, gives us a lot of confidence.”

“It is great to finally have the cover off the car and be able to show off what is, in my honest opinion, a superb livery,” said Dane.

“A lot of work has gone into this, not only with the Red Bull guys and girls in Australia and in Austria but also with Peter Hughes in the GM Holden design team and Simon McNamara. It's been a real collaboration, and I'd personally like to thank everyone involved across Holden, Red Bull and Triple Eight in creating this livery.” 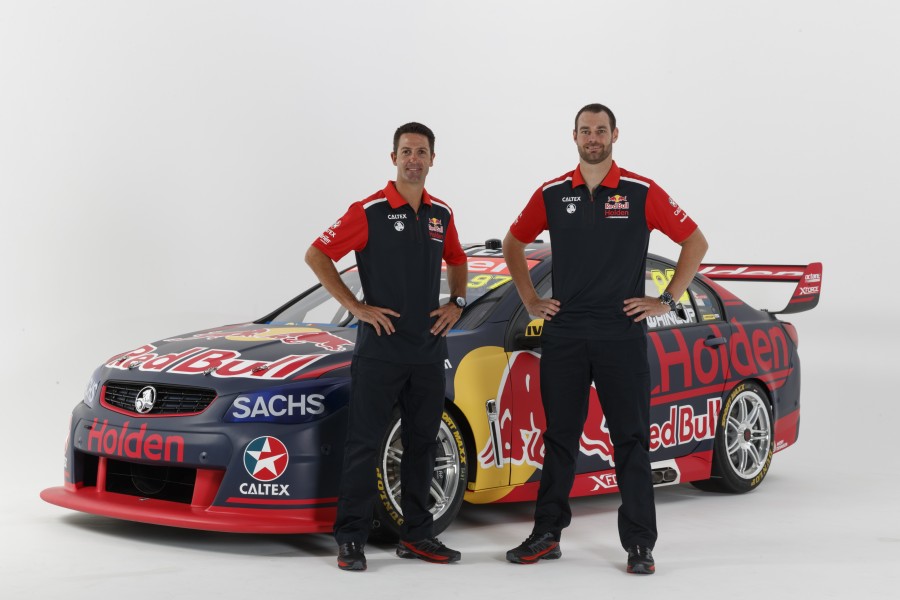 GM Holden General Manager of Marketing, Brand and Media Strategy, Emma Pinwill said the partnership in Holden’s new official factory racing team was important to the company as it evolves into a new era.

“Holden is delighted to be part of the new Red Bull Holden Racing Team; the formation of a factory racing team for Holden continues a near 50 year tradition of involvement in motorsport and comes at the same time we are transforming our business and brand,” said Pinwill.

“Triple Eight are the most successful team of the modern era, and the opportunity to partner with them and an iconic brand in Red Bull is fantastic and was too good to pass up."

“Holden has made a long-term commitment to Supercars and we are not only excited about the season ahead, but also working with Triple Eight on the development of the racing version of the next-generation Commodore, which will hit the track in 2018.”

Having confirmed the energy drink’s continued support of the team through to the end of the 2019 season, Red Bull Australia Managing Director Jason Sargent firmly believes in the strength of the Supercars category and the team’s success.

"There is no recipe for success, but you do look for the formulas," said Sargent.

"We love the team, we love the Supercars category, we love the fans, and with that combination, we are excited to be a part of that for at least another three years. To have two iconic Australian brands join together like this, we are going to be a force to be reckoned with."

Alongside Holden and Red Bull, the team is thrilled to welcome X-Force and TW Steel onto the car, as well as Iveco and Octane Events in increased capacities, while Triple Eight are proud to continue successful relationships with Caltex, GearWrench and O’Brien AutoGlass for the 2017 season and beyond.

It is full steam ahead into 2017 for the team, as work on the 2018 Commodore is well underway at Triple Eight’s Brisbane workshop, whilst the Red Bull Holden Racing Team looks forward to making its debut on the track at the Clipsal 500 in Adelaide, March 2-5.