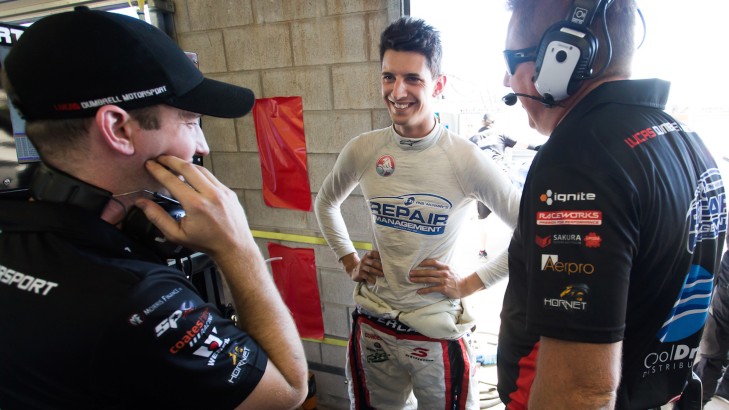 LDM drivers Nick Percat and Tim Blanchard will swap engineers this weekend, with Percat's regular engineer Brendan Hogan moving to the other side of the garage to work with Blanchard and Chris Stuckey moving from Blanchard to Percat.

Team Manager Barry Hay made the call in the lead-up to this weekend's round in the hope of scoring the team some improved results. The weekend also holds a change for Hay, who will step in as car controller for this event and the PIRTEK Enduro Cup.

"The personalities with the new line up complement each other in the aim of producing a better overall result for LDM," Hay said.

"Although a big call, it's something that I definitely think the team will benefit from and it was great that all parties including the engineers were happy to take on board."

Percat is focused on finishing in the top 15 in the championship, and believes the engineering change strengthens the crew.

"Although changing the engineers is a significant alteration, it's about making the whole team stronger and helping to get the #3 car further up the grid where they belong," Percat said.

"This is the last opportunity before we head into the endurance rounds to continue to gel and build on all the things we have been working hard on.

"I'm hoping for a solid weekend and my aim is to get my Repair Management Australia Commodore to the pointy end of the grid."

Percat is currently 18th in the Championship - no LDM driver has finished higher than that in the final pointscore bar Russell Ingall, who finished 18th in 2014.

The South Australian native has had some experience around Sydney's track, including finishing runner-up to Scott McLaughlin in last year's Sunday race by just 0.3632sec, the closest finishing margin in V8 Supercars at Sydney Motorsport Park since 2007.

"It's a track I've had many milestone results at. I love the flow and commitment needed to go fast here. It's the type of track that requires a lot of patience in a V8 Supercar because the tyre degradation is quite high," he said.

"Last year I scored my first podium here in a V8 Supercar and had a great battle with Scotty McLaughlin."

On the flip side, teammate Tim Blanchard, driver of the #3 Team CoolDrive Commodore has never raced in the V8 Supercars Championship before at Sydney Motorsport Park.

He has, however, driven a V8 Supercar (for Dick Johnson Racing) at the pre-season test day in 2013 and again this year with the LDM team for the Sydney SuperTest in February.

"It will be great to go back to Sydney Motorsport Park to see the improvement in the team since the beginning of the season," says Blanchard.

"I have only raced at Sydney Motorsport Park once back in 2007 in Formula Ford, but I really like the flowing nature of the circuit and think it suits my driving style. This weekend should help play to our strengths."

It has been a busy two weeks in the LDM workshop, after the lengthy search for Blanchard's endurance race co-driver was finally put to an end.

"We are really excited to have Karl onboard for the Pirtek Endurance Cup, he brings to the team a wealth of experience which gives us extra confidence going into these important races," Blanchard said.

"I have worked with Karl back at Kelly Racing so we already have an understanding of what we like out of the car, this will help in setting the car up.

"These races are extremely important to LDM. After a tough start to the season, we have been really focused on being ready to show what we are capable of in the endurance races.

"Finding the right co-driver was an integral part of piecing that together and I am confident Karl is the right person for the job."

Blanchard is currently sitting 24th in the V8 Supercars Championship.

Keep up to date with all the action from the Sydney Motorsport Park SuperSprint on Fox Sports 5 (channel 506), as well as replays on ONE and TEN.The V8 Supercars hit the track for the first Practice session at 11.25am on Friday August 21.

New colours for Kelly in Sydney

Back to the future for Tander

Five reasons to be there