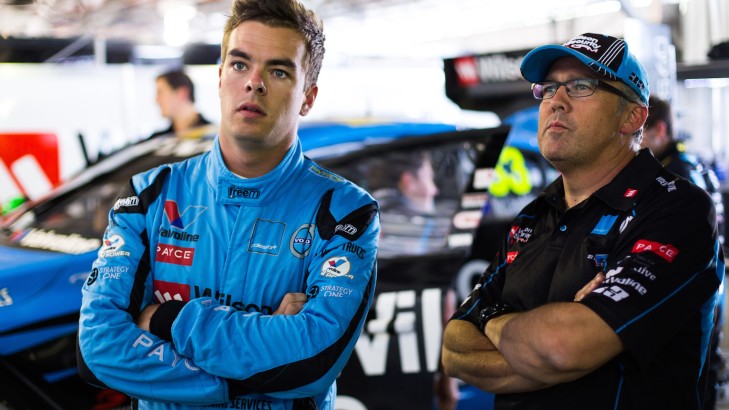 The start of the Pirtek Enduro Cup is upon us and when looking at the key pairings, it's hard to go past good mates and former teammates Scott McLaughlin and Alex Premat.

They took home a surfboard at the Gold Coast, but Sandown and Bathurst were tough for the pair - stuck in pit lane traffic at Sandown, and suffering after McLaughlin's crash at Mount Panorama.

A result at the enduros would turn what has been a testing year for Wilson Security GRM around. Can they overcome the reliability issues that have plagued 2015 and bag a result at one of the critical races this season?

"We have done a lot of work to continually improve reliability and we are confident that we are on top of the problems we had at the start of the year," car #33 engineer Richard Hollway told v8supercars.com.au.

Hollway, who is a well-known face in pit lane after many years in V8 Supercars, said 'Frenchie' Premat went well at the team's test day last week and would be an asset during enduro season.

"Alex did a very good job at our Winton test, he got off the plane from the US on Sunday afternoon, lobbed up to Winton Monday morning and was on the pace in a couple of laps!

"He fits straight back into the team like he never left and gets on well with everyone.

"It may sound like an obvious point but it is a huge advantage to have two drivers that respect each other and are working well together to make the car faster. There are always compromises for the drivers at enduros and these work better if the two drivers get on."

Hollway explained the ins and outs of the Wilson Security Sandown 500 - and reflected on his best memory at the circuit - with v8supercars.com.au.

The 3.1km, anti-clockwise Sandown circuit is all about traction.

"You must have a car that puts its power down well - particularly out of turn 4 and the last turn. These corners are both second gear and lead onto long straights which makes the corner exit crucial," Hollway explained.

"There is one third gear corner at turn 1 and a high speed section over the top into 'Dandenong Road', which is the key overtaking position.

"The majority of the track surface is very old and low grip but there are patches of new bitumen which have a much higher grip level - this makes setup tricky as the balance of the car changes on the different surfaces.

"At turn 4 you have good bitumen mid-corner but old bitumen on the entry and exit so you get a couple of balance changes in one corner."

One thing to watch out for at the circuit is the bumps.

Riding the kerbs is crucial at Sandown, and Hollway believes that is one of the strengths of the Volvo S60.

"Kerb riding is super important at Sandown as the car must be able to soak them up without upsetting the traction phase of the corner," he explained.

Setup is focused on traction at Sandown, and the circuit is tough on the cars given the bumps at kerbs.

"The suspension and shocks get a real workout especially in the 2, 3, 4 bus stop section," Hollway said.

"It is not uncommon to bend shocks in this section if the driver gets it all wrong - this can throw the balance of the car out and slow you down.

"With two long straights Sandown is also very tough on brakes and will require a pad change so that the pedal is good at the end of the race."

Also watch out for what Hollway called "autocross action" at turns 2 and 3, where cars can be forced wide under brakes on the entry into turn 2.

"It can get pretty ugly because there is no room and you have to rejoin the circuit quickly to avoid running into armco! You can easily bend the suspension or damage the front splitter or fill you radiator up with dirt if this happens.

"Alex [Premat] and Davey Reynolds had a serious go into there last year that looked like it would end in tears but they both came out relatively unscathed.

"Sometimes you wonder if you are engineering a touring car or a tarmac rallycar!" 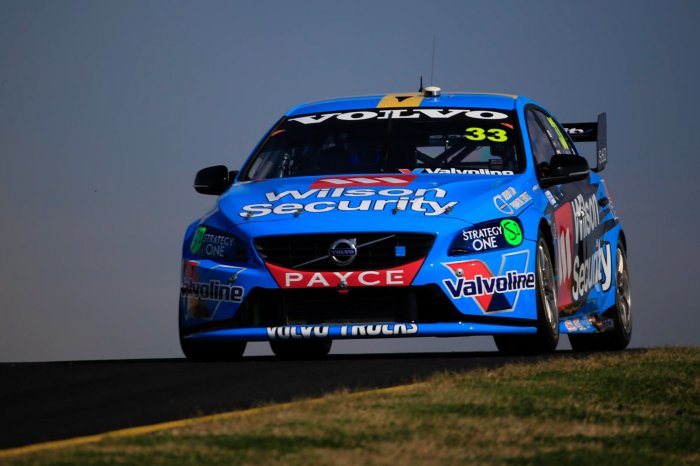 Main drivers will hit the circuit on Friday for the first of three half-hour practice sessions - but that is the only opportunity before Saturday to get behind the wheel, so it's important to focus on setup in that time.

"For the first session the goal is to get a good base set up so that Alex can get miles under his belt in his two sessions," Hollway said.

"Alex is a big fan of the Sandown layout and was straight on the pace at Winton, so I expect he will be quick in the practice 2 co-driver session.

"The feedback from Alex and Scotty is very similar so we can continue to tune the car in both of these sessions."

McLaughlin will sample the changes on Saturday morning, before the team focuses on qualifying setup, simulating a qualifying run with fresh tyres before that all-in first qualifying session.

Hollway says fans should look out for those who have good consistency on longer runs.

"During practice it's pretty easy to tweak the setup to get one fast lap out of the car - but it's the teams doing longer race runs with good consistency that will go well on Sunday.

"They may not necessarily be at the top of the time sheets during practice but they will hang in with consistent lap times over the full length of a stint."

Hollway says track position is important at Sandown, because it is tricky to overtake.

V8 Supercars Hall of Famers Dick Johnson and John Bowe hold the record for winning from the lowest grid position at the circuit, having started 15th in 1994. However, every year since then, the Sandown 500 winning car has started inside the top 10.

The qualifying format is unique for Sandown, with an all-in session to determine a grid for a co-driver only 60km race.

That then determines the grid for a 60km main driver race, which sets the starting grid and locks in ARMOR ALL Pole Position for Sunday's 500km race.

The qualifying race is the co-driver's first opportunity to race the car and see how he stacks up against the opposition.

"Although these are only short races you get a guide on your speed and how well your car setup looks after its tyres relative to the field," Hollway said, while noting fixing damage is not the way a team wants to spend its Saturday night.

"If you have to battle your way through the field [on Sunday] you hurt the brakes the tyres and risk damage rubbing panels with other cars - the best way to look after the car is to be setting your own pace out the front.

"If it's a sprint to the finish, your car is in good shape."

The endurance races are known for complex strategy options - and teams need to keep an eye on both cars, with double stacking in pit lane having been disastrous for some in the past.

Hollway explained how track position affected strategy and what teams could do come Sunday at Sandown.

"[Strategy] depends a lot on whether you are the first or second car on track (within your team)," he began.

"If you're the second car, you will probably dive in around lap 16 to avoid double stacking and you will have enough fuel to get to lap 54 on your second stop.

"If you're the lead car you would take a safety car from lap 1-ish and then search for clear track to maximise speed."

Co-drivers are required to complete 54 laps, so you often see co-drivers start the race to get those laps in the bag quickly.

"Everybody plans to have their main game driver in for the last stint so you must ensure that if there is a safety car with one stint to go you have completed your co-driver laps.

"This also minimises the risk of a driver change on the last stop - if you have a drama earlier in the race you give yourself more time to recover."

Hollway says you can get around 40 laps out of a tank of fuel, so cars can make it home from lap 121 on Sunday.

Last year Wilson Security GRM #33 was caught out in the pit lane, with Premat stuck behind neighbouring #222 for over 20 seconds.

"It cost us eight positions and we never really recovered," Hollway said.

"The Walkinshaw Racing team, two garages down from us, double stacked in front of the DJR pit. Car #222 was parked in the correct position but because pit lane is so narrow there was not enough room for Alex to get out.

"This could potentially happen to most teams again because the pit lane layout is the same as last year - very short and very narrow!"

"If you do the maths, four compulsory stops on Sunday means five stints, plus the two short races on Saturday equals seven sets.

"Last year with only six sets we had to use the Saturday race tyres on Sunday."

Degradation shouldn't be high if the car is setup well.

Last year's race saw two safety car periods throughout - and according to Hollway, an ill-timed safety car can have a huge effect on the outcome of the race.

"The danger for some teams is that the co-driver has to do a lot of laps, as per last year when a safety car fell at lap 44 which was 10 laps short of the co-driver minimum.

"To get home in two more stops you had to run your co-driver to about lap 80ish.

"If your co-driver is off the pace then this is a disaster and is a time when a quality co-driver can make the difference between winning and losing."

"It was a terrible day weather-wise and at one stage the safety car was out and it was hailing.

"We were leading the race and Skaifey was pretty keen for it to finish. He reported over the radio, 'Tell race control it's snowing at Dandenong Road'.

"To add to that alternator failed so the heated screen demisters were out of action so it was a relief to get the win."