After a bittersweet Sunday in Tasmania, #55 race engineer Brad Wischusen talks through plans to grab that result that slipped away, as they hit the track again this weekend in Perth.

The Bottle-O driver David Reynolds started on the front row, but after an incident with Craig Lowndes set him back, a podium went begging at Symmons Plains.

While Wischusen said the result was disappointing, the team has focused on the positives of that weekend while preparing for this week's UBET Perth SuperSprint.

"Tasmania was very promising with respect to our car speed," Wischusen told v8supercars.com.au.

"Race three was obviously disappointing as you don't expect that up the front, but that's racing and we have to take away the positives, which was our speed and consistency. You can only control your own actions and I think we did that as best we could."

"I'm really enjoying working with Dave this year, he's very fast and provides good feedback which makes my job easier. It is only our fourth round together but we have a strong bond and mutual understanding of what we need out of the car and each other."

He talked through the ins and outs of the Perth SuperSprint - the year's second mixed tyre event - with v8supercars.com.au. 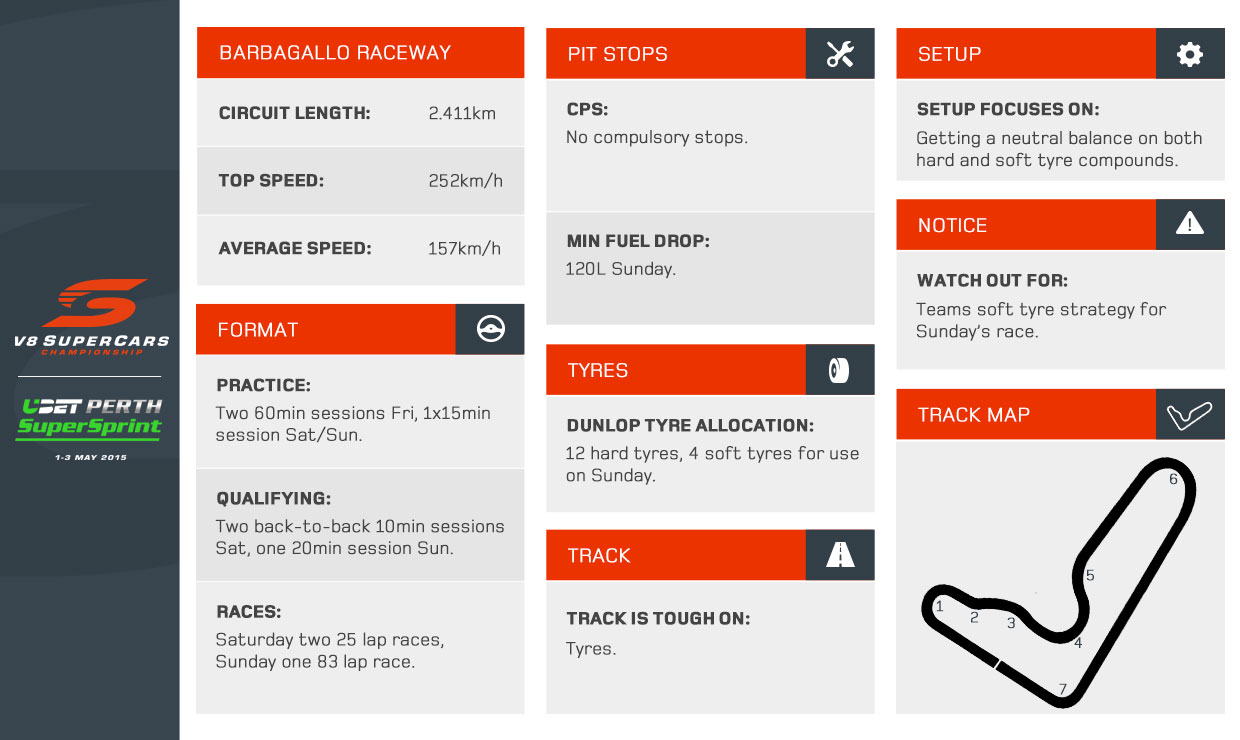 The unique, short Barbagallo circuit has just seven corners, with lap times under one minute.

"The corners are very long, which requires a lot of trail brake and time building throttle," Wischusen explained.

"Barbagallo is also reasonably undulating with high lateral G's experienced at 'the bowl' (turn six), which apexes just as you start going back up hill, and high braking G's at turn seven, where the braking zone is uphill."

Though it is a short track, there are good passing opportunities, with Wischusen highlighting turns one, six and seven as the usual overtaking corners.

This track is all about tyres. Making the most of the rubber you've got is the most important thing at the Perth track, Wischusen says.

"Tyres are always the biggest factor at Barbagallo given the high degradation present.

"The age of the surface and the sand that gets blown onto it make it one of the highest degradation circuits we attend."

The nature of the track means it is tricky to set-up the car.

"It is a difficult circuit to get right with respect to chassis balance as the high tyre wear means that learning about setup changes is difficult during practice.

"It is important to have good front grip as the corners are quite long and you are in them for a long time. But rear grip on corner exit is paramount, especially as it gets deeper into the race and the relative tyre condition begins to play a part. The left side tyres especially see quite high loading given the nature of the circuit and this can dictate the setup direction to an extent, but overall tyre preservation at the end of the day is what will give you results in the races."

While there were a number of tyre failures last year at Barbagallo, as teams tried to maximise tyre life, the introduction of the minimum tyre pressure rule means it shouldn't be an issue this time around.

Introduced for the UBET Perth SuperSprint, Wischusen believes utilising tyre pressure sensors is something the category has needed for a while, and that it will ultimately make the racing closer.

"It probably makes it a bit easier on the officials to monitor each team more effectively and while there's a few extra dollars in it I believe overall it is a positive in respect to the safety of the drivers," he said.

"For engineers it helps to monitor and diagnose any potential tyre issues that may arise during the race from slow leaks and punctures as well as being able to understand what the tyres experience while on circuit with respect to their pressure rise with temperature.

"This is data that has not previously been allowed to be logged under the rules and so it a little like having a new toy to play with!" 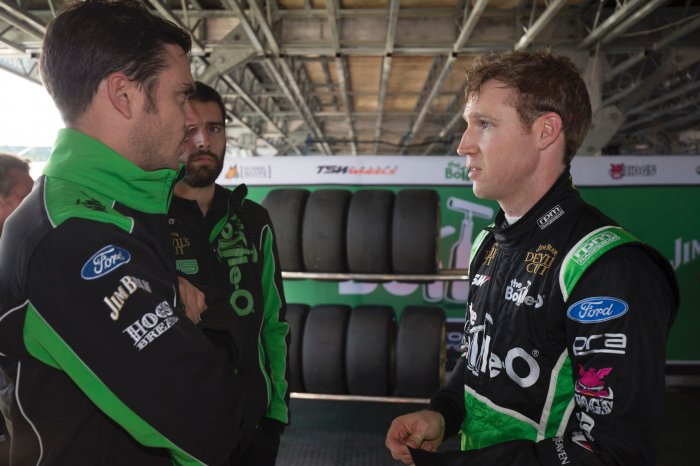 The format for practice is the same as Tasmania - two one-hour sessions on Friday, and one 15-minute session on Saturday and Sunday mornings.

Wischusen says the key for following practice at home is having an idea of which tyre compound teams are using, which indicates who is competitive.

For example, Craig Lowndes set his time, second-fastest overall, on hard tyres while many of the front-runners were on softs in Tasmania - he went on to be strong across the meeting.

How each team uses Friday will depend on their pre-marked tyre allocation.

"Teams won't want to spend all their rubber too quickly," the #55 engineer said.

"I would expect a reasonable amount of track time, but probably more time will be spent planning out each setup change than completing the most number of laps. This will allow the team to get a proper read on the chassis balance and minimise the effects of tyre wear."

Emphasis is on qualifying for the short races, with less time to move through the pack and no pit stop strategy options to jump forward.

"For those that start further back than they would like, you can usually see some more aggressive passing maneuvers.

"But at the end of the day, the two Saturday races are the same points as the Sunday race, so you need to make sure you bank good points on Saturday."

On Saturday, two sets of hard tyres will be required to maximise performances, Wischusen says.

"I would not expect many teams to try to use any less for these races as your competitiveness will drop considerably for the second race given the high tyre degradation," he explains.

That leaves a set of each compound for Sunday's race, with the potential to re-use some of Saturday's best remaining tyres for a third stint.

"We saw at Symmons Plains, which has very low tyre degradation, that nearly every team used their one allocated set of softs for two of the stints in Sunday's race.

"We are now going to Barbagallo, which is one of the highest tyre wear circuits, and so this strategy becomes more risky for teams to use as you want to try and preserve the soft tyre."

The last mixed tyre race in Perth was in 2012, with 'soft only' weekends since then.

"As we haven't run at Barbagallo on a hard tyre for quite a number of years now, I think until teams get a read on the relative tyre degradation from Friday and Saturday it will be difficult to predict how it will play out on Sunday.

"I would expect some varying strategies though, which should make the racing good on Sunday with a lot of passing."

As usual, at least two pit stops are required for the mandatory 120 litre fuel drop during Sunday's race. Wischusen reminds fans that different fuel fills may change the order, but given that all cars add the same amount, it shouldn't have much bearing on the end result.

"The biggest variation will come from how teams decide to use their two compounds of tyres over the course of the race."

"It can be quite easy to get the cars buried in the sand traps if there is an off-circuit excursion, so this can mean a high chance of safety car deployment," Wischusen begins.

Given lap time is less than one minute - like Tasmania - there is a high chance of going down a lap if you're back in the pack.

"So it is all about managing how far behind the leader you are if needing to take a pitstop under Safety Car, so that you don't end up a lap down."

Stay tuned for this weekend's V8 Supercars racing at the UBET Perth SuperSprint, kicking off tomorrow at Barbagallo Raceway. Click here more information and for ticketing options, and click here for the TV schedule including FOX SPORTS and NETWORK Ten times for the weekend.