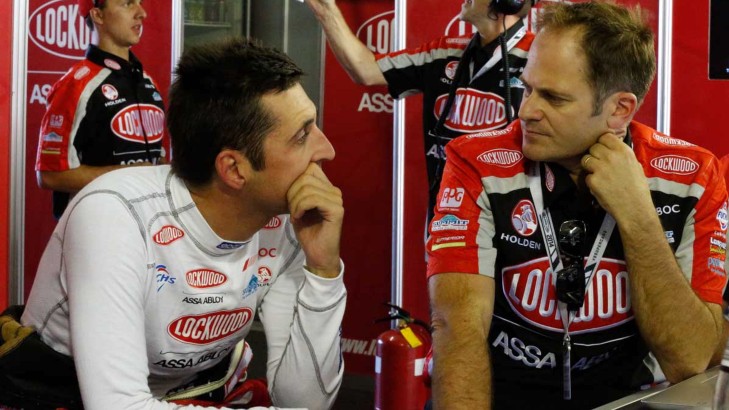 It's the year's biggest race -and for Lockwood Racing's #14, a big opportunity to grab some crucial points.

While he looked a strong contender early in the season, recently Fabian Coulthard has dropped away from the leaders on the points table, now 469 behind leader Jamie Whincup, and sixth after being as high as second in Perth.

However, race engineer for the BJR Commodore Phil Keed believes Coulthard, paired with Luke Youlden for the Pirtek Enduro Cup, can claw back.

"Bathurst and Gold Coast are critical to the rest of our year," Keed told v8supercars.com.au.

"We have been in a podium position at almost every round this year but we aren't always able to back it up over a whole weekend. We need to find more consistent pace to be able to challenge the top two teams.

"A few of the contenders have made good steps this year and we need to go with them.

"The whole team at BJR and our engine supplier NRE have been working tirelessly to improve our pace and we have found some good gains recently but we need to show that improvement over the next couple of races."

Keed explains what they need to do well for a strong result at the Supercheap Auto Bathurst 1000.

Keed: "Bathurst is a fantastic and challenging track from an engineering point of view. It is predominantly smooth and with the resurfacing this year we expect it to be high grip. There aren't many kerbs or big bumps.

"It is unique in our series in that it has very large gradients up and down the mountain. You have significant uphill and downhill corners and lots of undulating sections.

"You need confidence in the rear for the high speed across the mountain and the big stops but the corners leading onto the big straights are tight and slow so you need to be very good at turn and drive to maximise the speed down the straights.

"And of course it has two long straights and a huge run up the hill so it helps to have plenty of grunt!"

How will the weekend's format affect setup and strategy?

"There are six practice sessions, two of which are for co-driver only.

"The race on Sunday is worth all the points so almost everything you do is working towards that.

"Qualifying doesn't play as big a part as at the sprint rounds and there is nowhere to hide on race day if the car isn't quick enough in race trim so that's what dictates your practice sessions. There is usually a green tyre run at the end of P5 and P6 in preparation for qualifying but the rest of the focus is on race prep and setup.

"The race will be fixed to a minimum of seven stops. The fuel windows are just at the crossover between six stops and seven, and most teams would have had to trim fuel to achieve six, so it probably won't affect the strategy too much.

"There are usually two or more safety cars so it's likely the extra stop will be absorbed at one of those."

What is the tyre allocation and what sort of degradation are you expecting? How will this impact setup and strategy?

"For Bathurst we use Dunlop hard compound tyres. There are four sets of practice tyres and eight sets of race tyres allowed for the weekend.

"The eight race sets are just enough to fit one set at each of the seven mandated CPS pit stops. So there aren't any spare sets to put on at a safety car. This can affect some of the decisions you make during the day.

"Degradation is quite low at Bathurst, to the extent that we often see the fastest lap times coming at the end of a stint when the fuel load is low. This means that outright pace is a bigger factor governing race setup than tyre life.

"It is always good to have fresher tyres than your competitors in a stint though, so we will see some cars looking to create that opportunity through the day, either by taking a safety car outside the normal windows home or running longer than their competitors in an early stint."

What aspects of the circuit are you expecting to suit your car and what do you have to be mindful of?

"Our car works well on grippy smooth surfaces. We are generally very strong under brakes, which also suits the track. There are lots of big stops.

"One big factor to being able to race well on Sunday is getting off the tight corners and onto the straights well. And of course being quick down the straights. Those are the areas we will be mindful of. Trying to find a good balance between braking and high-speed confidence and turn in the tight corners.

"The new track surface will give a lot more grip and that creates quite a big unknown for everybody. It will be exciting on Thursday to see who has the right setup out of the truck."

"To do well at Bathurst you must have a fast race car on the Sunday. It helps if you roll out of the truck like that too! You need to be strong on the straights and off the tight corners to be able to pass and defend faster cars. With about 50 laps to go, everybody will have their main drivers in and if there is a battle in the last stint of the race, outright pace is what you need.

"Everything else is to get you into a good position for that point in the race.

"There will be at least seven pit stops so the team need to be right on their game on Sunday. Pit stops through the day often decide the order leading into the last stint. We're lucky to have some of the best guys in the business here at BJR and the pit stop crew has been practicing harder than ever. I'm sure it's similar up and down pit lane.

"As long as you have a fast race car, you don't need to qualify on the front row but you do need to be in the top 10 to see you through the first 40 laps without getting held up too much.

"And last but not least you need to be reliable and stay out of trouble all day!"

What are the challenges from your point of view, now working with another driver?

"We're lucky to have Luke Youlden as Fabian's co driver, he is one of the fastest co-drivers out there and also very easy to work with. He and Fabian communicate very well and Luke understands what he needs to do to get the most out of the car so I don't really have to compromise for either driver.

"It's not always this way with two drivers sharing a car but I don't find it any extra challenge at all."

Bathurst has been resurfaced and there's talk of the lap record (2min06.80, Craig Lowndes, 2010) getting smashed. What's your prediction for the new time?

"Well other categories have found a lot of time there since the resurfacing. The GT cars were over two seconds faster this year than 2013.

"The engines love low ambient so I will say a low 6 (2min06sec) and maybe even a high 5 if we get a nice cool cloudy day for P6 or the shootout."

Luke Youlden  ›
15' Team BOC and Freightliner Racing ›
2014 Supercheap Auto Bathurst 1000  ›
Stay In The Know
Sign up to the Virgin Australia Supercars Championship Newsletter
We use cookies to ensure that we give you the best experience on our website. If you continue to use this site we will assume that you are happy with it.Ok