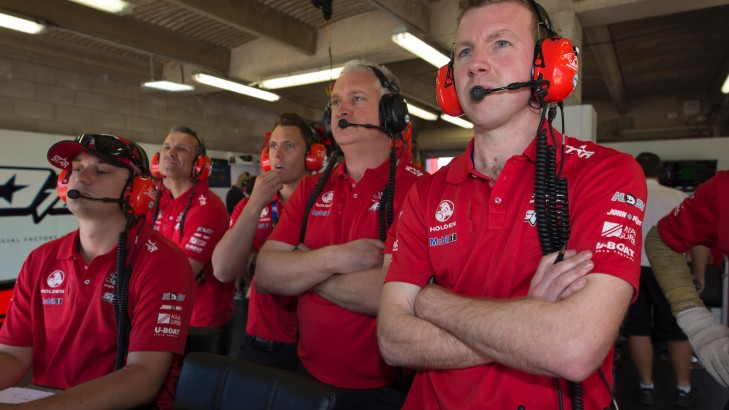 James Courtney had a fairytale return to V8 Supercars, Jack Perkins a fitting reward for his enduro efforts and the Holden Racing Team flexed its muscles at the Gold Coast taking a smart win on the street circuit.

A clever strategy call put the #22 in contention after a double stack, and while it was an intense finish for those watching on, race engineer Al McVean says the mood was quite calm in the garage.

"It was far more tense during and just after the earlier safety car period as we worked out what to do from that point forward," he told v8supercars.com.au.

"We had already built a comfortable margin on fuel and there was no one in a position to force us into using more fuel. We just kept conserving and using up the gaps behind."

While the win was an exciting one for the team, focus shifts forward quickly and HRT plans to learn as much as possible from the next few events.

"The fundamental goal is to address the issues that are hindering us in terms of outright performance and to confirm we have solutions in place heading into 2016," McVean explained.

"If we can solve these issues the championship results will follow - the primary goal is winning the team's championship.

"As for JC's championship, seventh is a possible outcome if we perform to the level we know we can."

The pair is hoping to build on Courtney's best result at Pukekohe, achieved last year in April.

"Pole and a podium in Race 2 last year was a highlight at this track," McVean said.

"But my best memory of New Zealand has to be proposing to my now wife in the days after the race here in 2010 - and her saying yes!"

McVean explained the ins and outs of Pukekohe, which goes back to SuperSprint format, with two races and qualifying on Saturday and a 200km mixed tyre race on Sunday.

The 2.91km track has a bit of everything.

"The circuit ranks very high in average speed, but more from fast corners rather than long straights," McVean said. "The circuit also ranks highly for bumps.

McVean believes HRT's performance through the high-speed corners have generally been strong at Pukekohe.

"Our major focus has to be on keeping the car stable and balanced into and through the slow speed corners as this is where the majority of the time is."

"So both areas need to be managed well to be fast."

The track is tough on dampers, as it is bumpy through both the first and last sectors, and in the past it has not been unusual to see tyre failures with teams running low pressures and drivers taking a lot of kerb.

"The minimum pressure rule minimises this risk but some risk remains if kerb use is too aggressive early in the stint.

"Oh - and wet weather!" he added as something to always look out for.

Back to the SuperSprint format means two practice sessions on Friday to set up the car.

"It is important to make the car stable and predictable in the high speed early so that the driver has confidence to push around the whole circuit," McVean said.

"Once this is under control we can target improving balance and grip in the slower speed corners for the biggest lap time reward."

Keep an eye on the V8 Supercars through the high speed first and last corners - there will be some wild moments as drivers come to grips with the extreme bumps. 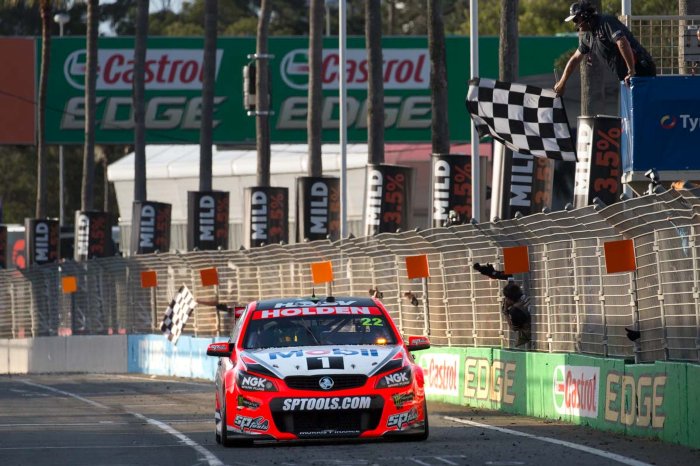 Qualifying then returns to the usual back-to-back 10-minute sessions on Saturday, the first on the hard Dunlop tyre, second on the soft.

"The most intriguing challenge on Saturday will be soft tyre qualifying as no one will have run a soft tyre at this track up to this point - ever," McVean noted.

"Both drivers and engineers will be operating with a high degree of guesswork, which will no doubt shake up the order but also provide an opportunity to outperform."

The first race on the hard tyre will be a dash to the finish, but the second will again be interesting and prove crucial to understand how to approach using the soft tyre in Sunday's strategy-fuelled 200km race.

"The soft tyre race will be very interesting as it is the first time anyone will have run the soft tyre over a distance, meaning tyre degradation numbers - and how hard to push - are unknown.

"That race Saturday is critical to providing the soft tyre wear and degradation information needed to plot the ideal strategy for Sunday. Without this we will have to revert back to our pre-race predictions." 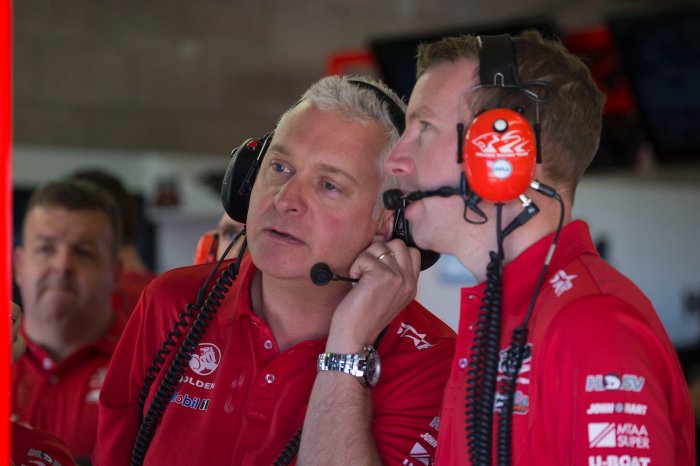 With five sets of hard tyres and two sets of softs (one to be used on Sunday), the allocation provides enough tyresto race hard across the weekend.

Degradation isn't really an issue at the circuit, though it will need to be managed.

"It will play a factor in the longer races, and to a lesser extent the shorter races," McVean said.

Strategies for Sunday will need to be assessed after Saturday's races but as always, there are a number of options for teams to take into account.

"With the circuit featuring a significant bias to right-hand turns there presents the option of moving the tyres around for a second stint and recovering some of the initial performance.

"But the fact we have never run the soft tyre at this circuit means at this point we are relying purely on spreadsheet predictions as to what the wear rates will be."

Teams won't need to mix and match tyres for the races, but the big question will be whether the soft tyres are re-used for a second stint on Sunday.

"This is a good option for early track position but could leave you vulnerable at the end of the race to those running a more conventional hard-hard-soft strategy."

As always, the 120-litre fuel drop means a minimum of two stops throughout Sunday's 200km race.

"There are though a multitude of options for when to take those stops as we saw in the long race here last year," McVean said.

"Cars can run both long and short before the first stops, which coupled with the ability to fill the cars with various levels of fuel at that first stop means lots of options for strategy.

"The over-riding goal for each car engineer will be finding clear track as this circuit is very difficult to pass on and time lost in traffic is a disaster."

The #22 engineer estimates the majority of cars would get 44 laps out of a tank of fuel.

There isn't a consistent pattern to safety cars at Pukekohe, but it has appeared regularly over the past two years.

"Only on Sunday will an appearance play a significant role in the outcome of the race," McVean said.

"Those starting on the soft tyre are generally the most at risk in this regard."

The V8 Supercars hit the track for practice tomorrow at the ITM 500 Auckland.