The Supercheap Auto Bathurst 1000 win hasn't quite sunk in yet, but for race engineer Grant McPherson, attention turned quickly to the Gold Coast.

Having successfully joined Triple Eight this season to run Craig Lowndes' car, McPherson has had plenty of eyes on him as Lowndes' right hand man in his fight to take a fourth V8 Supercars Championship. Particularly after his switch from running their key rival, Mark Winterbottom, last year!

This weekend, the duo again welcome Steven Richards in the fold - someone McPherson previously engineered during his years at Prodrive - and aim to dominate the Surfers Paradise streets.

"The last stint was quite surreal," McPherson said of Bathurst and seeing Lowndes cross the line in P1.

"The result probably doesn't change anything for us in the championship, as we only closed the gap to the lead by 24 points.

"Moving from fourth back up to second is irrelevant, as we only want to win ... we need to keep lifting our game, keep developing the car speed and keep fighting for race wins."

Having had success on the Gold Coast before, McPherson knows what it takes to do well at the tricky street circuit. In 2012, he won with Will Davison and Mika Salo on the Sunday after crashing the day before, and in 2009 with Mark Winterbottom after "the disappointment of the Bathurst BBQ".

McPherson spoke to v8supercars.com.au about the ins and outs of the Gold Coast, and what it will take for #888 to come away with a surfboard this weekend.

McPherson rightly described the 2.98km Gold Coast track as iconic, winding through the streets with the spectacular Surfers Paradise backdrop.

"As with all street circuits the main features are the unforgiving concrete walls," he said.

"To be fastest around this track requires ultimate levels of confidence and commitment.

"As with all circuits you need a good balance, but kerb riding is critical here."

McPherson notes the Beach Chicane is one for fans to keep an eye on: "four apexes at 140km an hour always provides great entertainment".

Lowndes has won three races on the Gold Coast, the last in 2013.

"This track is so tough on suspension components as they must absorb and control the full force of the kerb strikes," he explained.

"Bent wheel rims, suspension arms and damper shafts can occur if the wrong line is taken or if the car is incorrectly loaded through the chicanes.

"This track features mainly short, tight radius corners which reward a car with strong braking and drive characteristics more than a car that has better mid-corner speed and flow."

Ensure you tune in to Friday's practice sessions - McPherson promises they will be good to watch as drivers push the boundaries around the circuit in preparation for the weekend's races. Four half-hour sessions unfold on Friday, with two of those restricted to co-drivers only.

"This is when the drivers will be re-learning the limits, particularly through the two chicanes and someone inevitably will overstep the mark," he said.

"In Practice we will work towards getting a balance that makes the drivers feel comfortable to drive at the limit.

"With such long races we need to prioritise consistency to ensure that we are quick throughout the whole race, not just a handful of laps."

Given no one has ever won a race on the Gold Coast from outside the top six on the grid, a strong starting position is key at the track.

"This is one of the hardest passing circuits that we compete on, which in-turn makes qualifying so crucial," McPherson said.

"I expect qualifying times to be incredibly tight this year, which means that one small mistake could cost multiple positions on the grid."

On Saturday, ARMOR ALL Pole Position is determined by the Top 10 Shootout - an additional challenge for the drivers. While the qualifying session before is often viewed as 'a ticket' to the top 10, McPherson believes drivers will still be pushing for the top time.

"It is still very beneficial to have provisional pole heading into a shootout, because by being the last car in the shootout the driver knows exactly what he needs to achieve," he explained.

"It is common for grip levels to be quite different between qualifying sessions and top 10 shootouts, so having seen the lap-times of the previous nine cars makes it a lot easier to assess the track grip." 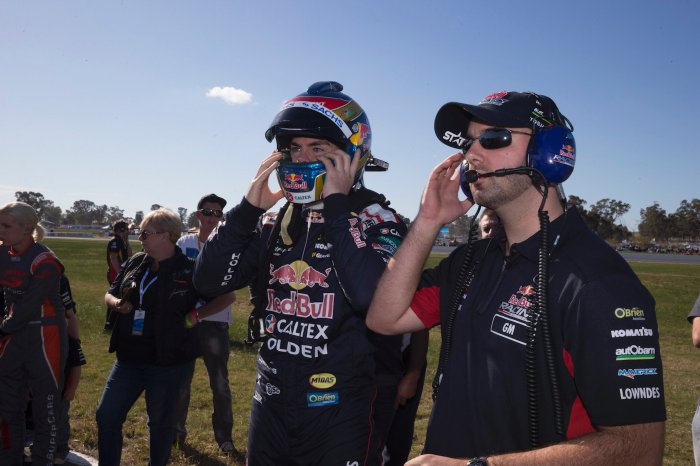 The race - pitstops and strategy

While the Gold Coast event is part of the Pirtek Enduro Cup, the format is very different to the previous two long distance races, particularly from a strategy point of view.

"By having only two planned pitstops, there are less options available, so it is easier to take a more rigid plan into the race," McPherson said.

The first part of the strategy - who will start the race?

"The main thing to consider is the pace difference between the pair.

"If you have a more competitive co-driver then you have more flexibility, particularly in the middle stage of the race as you are less concerned about completing their laps as early as possible."

Each car must complete two compulsory pit stops, not just to satisfy the rules, but to make it home.

And while double stacking was once again a hot topic following Bathurst - after Jamie Whincup's split second decision not to pit and the battle between TEKNO and the XBOX car - teams will plan as much as possible to avoid it.

"The biggest concern for double stacking is around the opening of the final fuel-to-end window," McPherson explained.

"Generally you will see one car from each team pit as early as possible to make it home, to eliminate the possibility of an overlap.

"However if a safety car occurs one to two laps prior to having taken this green pitstop, you would see the whole field being forced to pit and save fuel under safety car to make it to the finish without stopping again."

McPherson says most teams should be able to complete 42 laps on a tank of fuel, "so lap 60 is the typical earliest point to get to the finish".

With one set of soft Dunlop tyres allocated for each 300km race, it will be a strategy game as well as a sprint.

"The multiple tyre compounds could introduce some different options in the races," McPherson said.

"Some teams might use the softs up early to gain track position, whereas other teams might hold the soft tyres back to finish the race strong.

"If we see a bit of a spread of options, then we should get an exciting finish to both races.

"The durability of the hard tyre should be a lot better than the soft, but a new hard will definitely be slower than a new soft. It will be interesting to see how many laps before this changes and the old hard is faster than an old soft."

Last year the event was run all on soft tyres, which means a different approach this time round.

"In 2014, the Gold Coast event was the first soft tyre event with the minimum 17psi rule, so all teams have good data for tyre degradation and tyre wear rates," McPherson said.

The Lexus Safety Car has appeared in 26 of the 30 V8 Supercars races held at Surfers Paradise since 2002.

"Safety Car interventions can definitely change the dynamic of the race in an instant," McPherson said.

"If you are at a risk of queuing, then the penalty is obvious; but even if you are out in front they can cause a real headache.

"The benefit of pitting and gaining fuel-in-hand can be quite large, but being back in the pack can bring significant risks too."

Ingall: I'd had enough