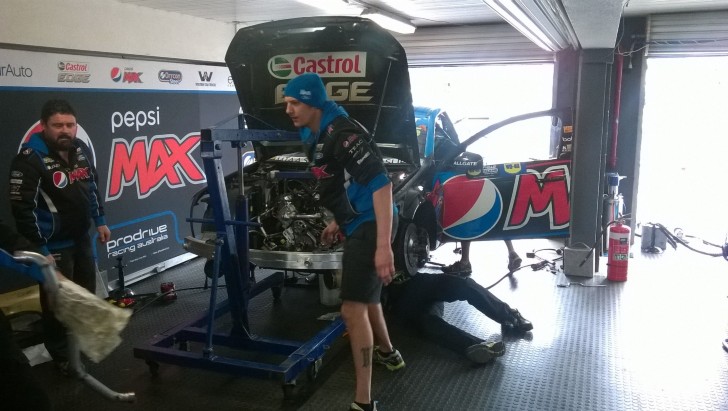 The engine is being changed in Mark Winterbottom's Pepsi-Max Falcon FG X after the championship leader reported a loss of power in this afternoon's two qualifying sessions for the WD-40 Phillip Island SuperSprint.

Despite the issue, Winterbottom still managed to qualify for fifth for race 31 and fourth for Race 32.

Team principal Tim Edwards told v8supercars.com.au that a new V8 engine would be swapped into the car in time for today's opening 60km race at 3.10pm Melbourne time.

"it seemed to lose power in qualifying," Edwards confirmed. "His micro-sectors around the corners were blistering but he was struggling a little bit in a straight line.

"So he did well to qualify where he did for both of those races.

"We couldn't see anything on the data, it was more what he was feeling than something.

"So we have done the safe thing and changed the engine rather than start fiddling around with injectors and coils and all that."

Edwards played down the impact the issue would have on Winterbottom and the team, as both the drivers' and team's championships battle hots up.

"This is where the teams rise to the occasion isn't it? You saw it in New Zealand with Craig Lowndes' (Red Bull) car. They thrive on these situations because it is where they really earn their money.