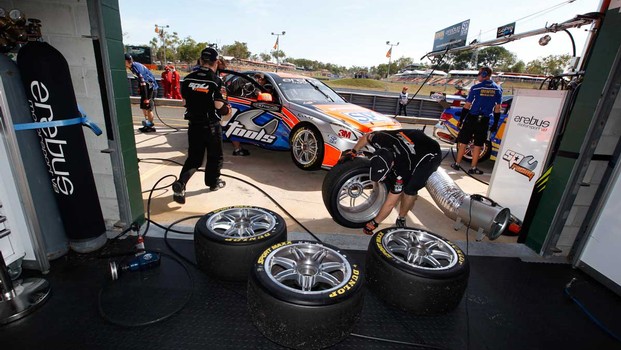 Though he sits at the bottom of the Championship standings, SP Tools Racing’s MaroEngel bagged a handful of points over the weekend in Darwin and is confident ofthe team’s progress moving forward.

The only one of thethree Erebus Motorsport V8 Mercedes-Benz AMG 63s avoiding the carnage inSunday’s final race, Engel sped through the field and fought his way to finish ninth.

Engel qualified 15th – only one position ahead of David Wall, who suffered extensive damage– but managed to avoid the incident.

“I had a decentstart dicing with SVG (Shane van Gisbergen) on the way into turn one,” Engel said. “And I just ranthe inside line and stayed tight.

“I saw some guysgot a bit wide in front of me, then the next thing I saw was a lot of carnage.

“It all seemed tobe going to the right hand side of the track, so I just kept left and camethrough there without a scratch, which was great. And that set us really wellfor the rest of the race.”

Is ninth a positive result, despite so many cars unable to compete after being damaged?

“Absolutely –there’s no doubt about it,” Engel said.

“Jason Bright ishigh in the Championship and he didn’t have the pace to stay with us in the race.

“We still need topress on and work harder. There’s certainly still work to be don on theengines, but at this stage I just have to say thank you to everyone working onthose engines, because it’s been a definite step forward.”

With the Sucrogen Townsville 400 next on the calendar, the result couldn’t have come at a better time– Engel mentioned the team had been struggling with the engine the most in hotconditions.

“This weekend (in Darwin) itwas hot and we probably had our best showing as a team,” he said. “I’m reallypleased about that, and a big thank you to the team and everyone involved doingthe hard work.”

Despite havingrookie status in the V8 Supercars Championship, Engel is an experienced racerin his own right – and he feels his performances have been close to histeammates'.

When it wasannounced the two would be driving together for the endurance races later thisseason, experienced V8 Supercars competitor Steven Johnson backed Engel’s driving ability.

Engel also feels heis worthy of his seat at Erebus, particularly when comparing his performance tothat of his teammates – click here to see Engel's season progress.

“I definitely thingmy performances have been very close to Tim (Slade) and Lee (Holdsworth’s)– so I guess what you have to ask yourself is how highly do you rate Timand Lee?” Engel said.

“I think at the endof last year they were certainly the up and comings, both top eight in theChampionship. And I think I’ve out-qualified them on several occasions, so Idon’t feel like I’m lagging behind.

“Certainly my race luck hasn’t been thebest and the odd mistake is normal as a rookie but I don’t really let all thatget to me.

“I know where we sit in the Championship,but I think you’ve got to factor in that we’re very much in development andwhere we started out with these cars.

“But we hope we can end the year with avery strong car and I’m sure I’ll be able to show that I can run at the frontin this field.”

Engel felt theweekend showed a better performance on the soft tyre than on the hard tyre.

“I was there at theend … Had the race gone for a few more laps I might’ve actually got Scotty Mac (McLaughlin)and the FPR cars, so Scotty Mac was probably pretty busy on that last lap lookinginto the rearview mirrors!”

Will Erebus continue to improve its form atthe next event? The Sucrogen Townsville 400 will be held from July 5-7, withtickets available through Ticketek.

18/06/2013
Related Content
15' Erebus Motorsport ›
2013 SKYCITY Triple Crown  ›
2013 Sucrogen Townsville 400  ›
Stay In The Know
Sign up to the Virgin Australia Supercars Championship Newsletter
We use cookies to ensure that we give you the best experience on our website. If you continue to use this site we will assume that you are happy with it.Ok