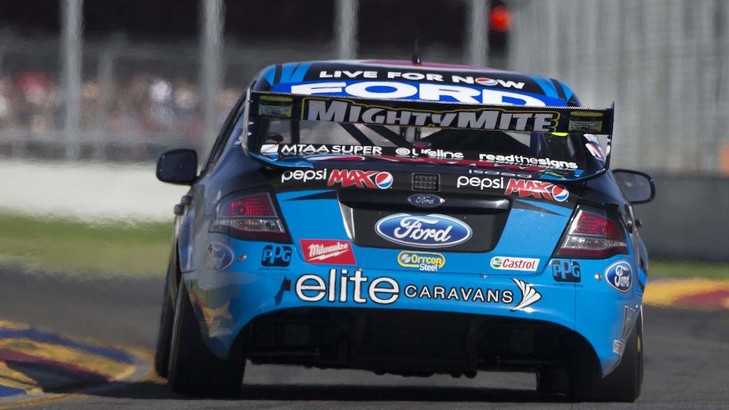 Elite Caravans won the Manufacturer of the Year Award last year and coincidentally will soon move their production and retail facilities to the buildings next to FPR’s Melbourne headquarters.

"Although we are moving into the factory that neighbours FPR in Campbellfield, this was not our main motivator to establish a great partnership with FPR." said Elite Caravans owner Adrian Cappola.

"We focus on innovation and attention to detail for success, the same attributes that FPR team exude, so I'm sure the partnership will be beneficial on and off the track for both parties.

"We will provide more than just financial input to the team. Our partnership will supply FPR with caravans at the track for the team to discuss strategies and for the drivers to relax in, while also interacting with fans via exciting competitions."

"MIGHTYMITE is for all ages and exudes energy and fun just like FPR," said Three Three Condiments director Michael McAlpine.

"MIGHTYMITE has a kangaroo as part of its labelling and marketing which brings back memories of the famous Super Roo Ford Falcons of the 1970s.

"MIGHTYMITE is a brand of Three Threes Condiments which is run by the fourth-generation family that started the company back in 1919 making pickles, jams and sauces. The mighty Falcons of FPR will bring us more exposure to more families that MIGHTYMITE is mighty right."

FPR Team Principal Tim Edwards welcomed the companies to the team who join along with KingGee Workwear and 3M.

"It has given the whole team a boost of confidence to have four big companies partner with the team heading into the new season," Edwards said.

"We are looking forward to Elite Caravans and MIGHTYMITE becoming part of the team. They are successful Australian-owned companies just like us and we are keen to help build their brands and enjoy success on and off track.

"It is also with great pleasure we partner across all four of our cars with KingGee Workwear along with 3M who will supply all the vinyl products we use to create the easily-recognisable liveries on our race cars.

"KingGee has a reputation for making durable and functional workwear which has been forged over nearly 100 years. The range is ideal for our crew’s needs both at the factory and in the gruelling race track environment."

While the team still has commercial opportunities available, the new signings join the existing brand portfolio which is headlined by Ford Australia, Pepsi Max and Castrol.

Mark Winterbottom has quaified fifth for this afternoon's 250km race, with Chaz Mostert just shy of the top 10 in 11th place.

Mark Winterbottom  ›
15' Pepsi Max Crew ›
2014 Clipsal 500 Adelaide  ›
Stay In The Know
Sign up to the Virgin Australia Supercars Championship Newsletter
We use cookies to ensure that we give you the best experience on our website. If you continue to use this site we will assume that you are happy with it.Ok