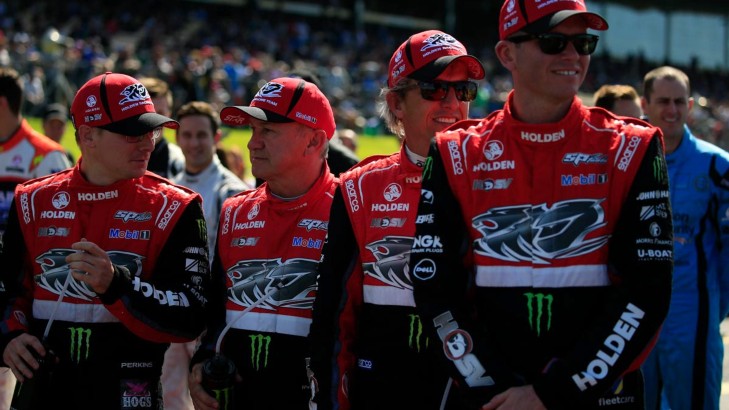 Holden Racing Team Managing Director Adrian Burgess says the team will wait until the 11th hour to decide whether James Courtney will contest the Supercheap Auto Bathurst 1000 or not.

Courtney told v8supercars.com.au at the start of the Sandown weekend that focussing on driving at the mountain was helping him stay positive after a freak accident at Sydney Motorsport Park left him with five broken ribs.

And the HRT boss said the team would be going to Mount Panorama with Courtney's "name on the entry list" in hope the 2010 Champion can take his rightful place behind the wheel.

At the weekend's Wilson Security Sandown 500, the driver-line up was shuffled with Jack Perkins stepping up as primary driver and Russell Ingall returning from retirement to assist as the co-driver. The pair finished ninth after a mammoth effort.

Burgess confirmed Courtney's recovery was "tracking along" although there could be a setback at any point.

"Obviously we're hoping there isn't, but we won't really know until maybe the week of, even," he told v8supercars.com.au.

"His body will continually improve - just hopefully it is improving at the rate that we need.

"If for any reason it doesn't improve at that rate we'll find ourselves close to Bathurst thinking, this could be marginal.

"So when the time is right we'll make a call, but we'll leave that until the 11th hour - we're not going to make any decisions this far out.

"We're going to give him every opportunity to get back to a condition we need for him to do the event ... we'll go there with his name on the entry list and if we need to change the name Wednesday night or Thursday night then we will."

Generally the team has until the team manager's briefing to finalise the driver line-up for the event.

While Ingall will be on hand as a backup for the Great Race, Burgess said that, of course, the team would prefer to have Courtney back in the #22.

"To be fair, Russell did a great job for us and we thank him for that, but we all - and I'm sure Russell - would like to see him back in the car ... as soon as we can.

"But we've got to let nature take its course and see what we get."

Courtney remarkably still sits in the top 10 in the Championship points, despite missing two rounds this season.

While the margin out to leader Mark Winterbottom had been 371 points heading into Sydney Motorsport Park - a challenging gap to bridge - Courtney hadn't given up hope of a second V8 Supercars crown this season.

Now, those chances have been dashed. But Burgess says there's no point dwelling on that. Particularly when the team is preparing four cars to tackle the longest and most challenging race on the calendar.

"No one's interested in ifs, buts and maybes - everyone's won the hypothetical championship haven't they? The hindsight championship - they don't pay any points for that," Burgess said.

"Look - it's happened, we're just dealing with it and trying to focus on working well as a team and improving what we're doing as a team.

"James' situation is one of those things we have to deal with. We can't do anything about it now, so we're not going to cry over it, we're just going to focus on developing this car and getting this car back to where we need to be - which is winning races for Garth and for James and the other two [Tim Slade and Lee Holdsworth].

"When the time is right James will get back in the car and we'll carry on.

"We'll get to the end of this year and we'll all regroup and make sure we go into 2016 with a package that's capable of all four drivers challenging every weekend - that's clearly your intention and desire anyway, so we'll keep working."

Courtney is yet to win a Bathurst 1000, despite contesting the race every year since 2005, when he debuted as a co-driver with HRT and paired with Jim Richards.