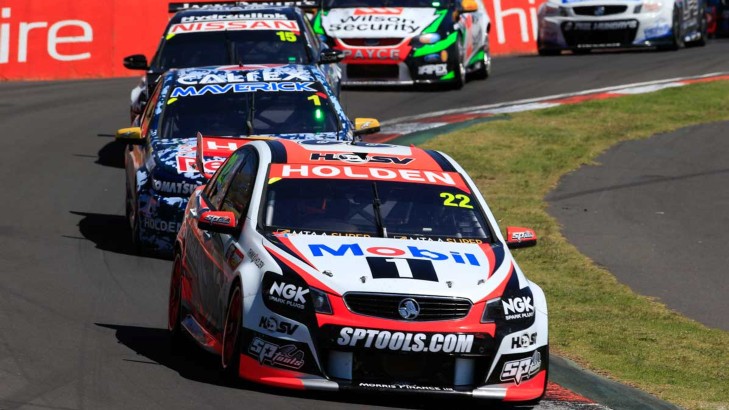 Holden Racing Team star James Courtney has his fingers crossed the electrical gremlins that have blighted his and Greg Murphy's Supercheap Auto Bathurst 1000 campaign have been cured.

But finding that fix has lost them three laps and almost certainly any chance of winning the great race.

The #22 HRT Holden Commodore VF has had issues ever since the race started and the team changed the wiring loom in the red flag period.

But Courtney had no throttle at the restart, had to be pushed into action by Shane van Gisbergen and pushed back into the pits by Jason Bright.

"I just had no throttle," Courtney lamented. "Not too sure what went on but the problem cost us three laps. Whether it is related to the other problems we have had during the day I don't know.

"But the way it is going out there we might be able to get those laps back. So we will keep pushing on and see how it ends up."

"And then we changed other little bits and pieces in the car to try and get it working like the g-sensor and the official camera," explained HRT team manager Anthony McDonald.

"When we had the red flag we changed the wiring loom in the car, started it and it worked. It revved no drama.

"Then as you saw James had no throttle, so we swapped that wiring loom and now everything seems to be working.

"Essentially, we have gone back to what we started with and it's working."

Courtney said the driving didn't feel as wild on circuit as it looked from the sidelines.

"I think the guys are just pushing on pretty hard. The track is unusual in that it's giving up a lot of grip, but when you want to load laterally it's letting go. So we will see what happens."

Whincup: a miracle if we finish