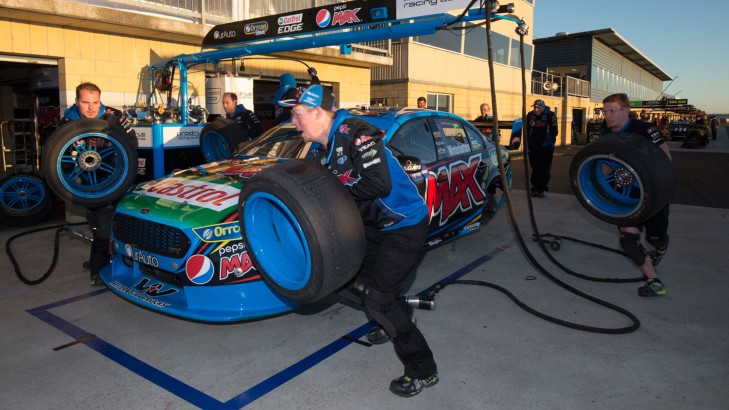 Across the weekend in Perth, drivers complained the three sets of hard tyres, one set of soft tyres and access to the car's pre-marked tyre bank did not offer up enough rubber to get the most out of their V8 Supercars.

However Edwards says the allocation adds to the intrigue of the racing and creates a spectacle on Sunday, bringing strategy into focus.

"The tyres we've got add to the challenge for everyone," he told v8supercars.com.au.

"There's question marks over tyres for practice, but when it comes to racing we all had new tyres for the race [on Saturday], one or two people elected to save them for [Sunday] - we've seen people do that in the past anyway.

V8 Supercars has confirmed there is an internal review of the Saturday race format after the meeting in Perth, with recommendations put to the Commission proposing a longer, single 120km sprint instead of the two 60km runs. Further details are expected to be revealed later this week.

No changes have been put forward regarding Sundays - which Edwards believes is a great formula to showcase the sport as teams juggle both compounds and a minimum fuel drop.

"There's 25 car groups of engineers up and down the pit lane who all have their own version of what's the right strategy for [a Sunday] race - and I think there's [always] a chance that some of us will get it right and some people might get it horribly wrong."

He recalled a number of races where teams have elected to go different ways on strategies that eventuated in incredible tight finishes.

"I remember when Frosty and Whincup were on the front row in Darwin, one started on softs and they did the complete polar opposite strategies.

"For most of the race they went further and further apart to the mid-point and they went and finished the race bumper to bumper.

"That was a great story for the commentators to tell and the public to witness - so I think having mixed tyres is a good thing for the sport."

Edwards said he always took comments in the pit lane on-board when assessing these types of issues as a Commission member.

"I'm the first one to come on-board and say maybe we didn't quite get it right for Friday practice and if the other Commissioners shared that view there's a chance that could change - we don't get everything right.

"But as I say, the tyres we've got for the racing - there's no issue there. I'm certainly not in the mood or have a view to make any change."

The soft tyre was first used to mix up the racing and encourage passing when introduced in 2009, and Edwards firmly feels that is the way it should continue to be used, as part of a mixed tyre race.

"If the whole field's running around on soft tyres, then largely we're all going to lap at the same speed," he said.

"If we've got some on softs, some on hards, you see overtaking - and funnily enough that's what people who watch this sport want to see.