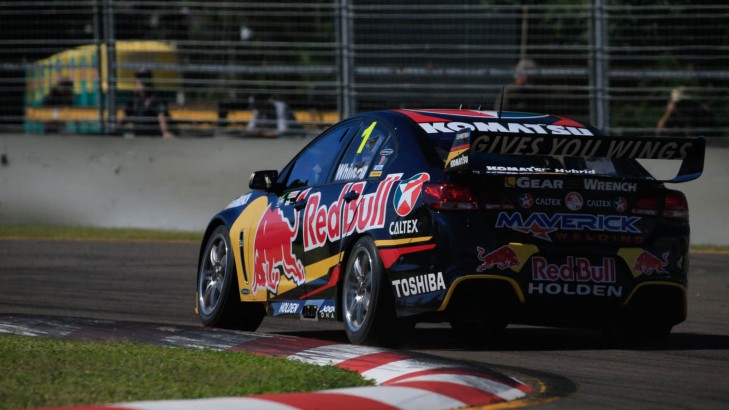 Red Bull Racing Australia hits Queensland Raceway today for its second 2014 test day, ahead of the race meeting at the circuit beginning August 1.

However, the test was not in the team's original plan for the year and means Red Bull - leading the teams' Championship - will forgo its regular pre-Bathurst run to be on-track today.

Three independent test days are allocated outside of the compulsory season launch, and Red Bull has already used one in June, with another planned in September, pre-enduros.

One key factor led to using that final test today, despite the absence of star driver Craig Lowndes and co-driver Paul Dumbrell - to run on Dunlop soft tyres.

The next event, the Coates Hire Ipswich 400 - which is at the test track - is a solely soft tyre round, with the following Sydney Motorsport Park 400 utilising both hard and soft compounds.

"At Darwin on the Sunday we weren't 100 per cent happy with our performance on softs - so this is a reactive test, you could say," team principal Mark Dutton told v8supercars.com.au.

"We weren't intending to do this one before - it's purely to rectify our weakness that we feel we have on softs ... the previous test we focused on hard tyres and saw the benefits from the hard work everyone put in at that test, as we improved our performance on the hard tyre at the Darwin round and also backed that up at Townsville. So that will be the main focus."

It is tight in the Championship fight, and the team needs to do everything in its power to keep a close check on current points leader and Ford foe Mark Winterbottom.

"Taking the test day ... was a big deal with other schedules, and deciding not to have a pre-Bathurst test - which is not the norm for us, we usually do it - so it was a big decision to be made.

"But we thought with QR being a soft tyre round, and with one set at Sydney Motorsport Park, we can't be sitting ducks in the water."

With both main drivers in the Championship hunt, the team cannot afford to test anything that is high risk at a race meeting.

"We're limited on tyres, but let's try and learn so we're not putting too much risk at the actual event," he said.

While some new componentry will be tested, 'Dutto' said there wouldn't be anything to get too excited about.

"No extra horsepower going onto the car or anything cool like that - just try to make it a little nicer along the way, so they're good to drive."

Speaking of a nice drive - Richards will have the perfect opportunity to get in the rhythm, running in car #888 for the day in Lowndes' absence. "Richo will be the luckiest co-driver you'll ever see with that amount of laps!"

TEKNO Autosports will also be present on Monday, with flying Kiwi Shane van Gisbergen in the Triple Eight Holden Commodore.

Despite being a customer team, Dutton said unless TEKNO suffered from a significant issue, they run their own separate programs.

Team boss and Pirtek Enduro Cup co-driver Jonathon Webb explained TEKNO had a few things to try and would be playing with the car a little - the primary focus was to continue moving forward, and not fall back to where they were in Perth, a forgettable performance from the #97.

Meanwhile in Melbourne, Brad Jones Racing will have all three main series V8 Supercars of Jason Bright, Fabian Coulthard and Dale Wood on-track at Winton - with co-drivers Andrew Jones and Luke Youlden present (Wood's is yet to be announced). Two Dunlop Series Commodores of last round winner Chris Pither and debutant Macauley Jones will also be on track.

The main aim? Simply to make them faster, according to co-owners Brad and Kim Jones.

Ford Performance Racing will also have a full crew with all four cars and co-drivers, as well as Cameron Waters' Dunlop Series car to run.

Lucas Dumbrell Motorsport is taking the opportunity to test again, after running its first independent test of the year right before the Winton round back in February.

Both Erebus Motorsport and Dick Johnson Racing will hit the track at Queensland Raceway on Wednesday ahead of the Coates Hire Ipswich 400.

Steven Richards  ›
15' Red Bull Racing Australia ›
2014 Coates Hire Ipswich 400  ›
Stay In The Know
Sign up to the Virgin Australia Supercars Championship Newsletter
We use cookies to ensure that we give you the best experience on our website. If you continue to use this site we will assume that you are happy with it.Ok