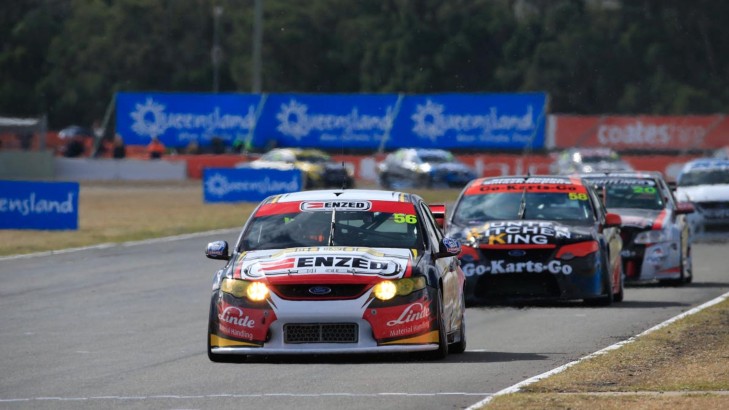 A number of Dunlop Series drivers will be on 'double duties' across next weekend's Supercheap Auto Bathurst 1000, competing alongside Championship drivers as co-pilots in Sunday's Great Race. And while fitness had previously been raised as a concern, many see the extra running more advantageous than not, with the opportunity to rack up much needed miles at the tricky track.

Those running in both the 250km mini-enduro -which counts towards the Dunlop Series title - and the '1000'include series leader Paul Dumbrell, Ash Walsh, Cameron Waters, Chris Pither, Andre Heimgartner, Ant Pedersen, Paul Morris and Andrew Jones.

Waters, who will pair up with Team JELD-WEN's Jack Perkins for the Bathurst 1000, said that despite the physical demands that come with the large amount of seat time, his double duties may pose an advantage.

"I'm going to be in the car quite a lot with the Dunlop Series all through the weekend with the practices and qualifying and doing the race on Saturday," he told v8supercars.com.au.

"My fitness is pretty good at the moment so I think in some ways it will be a big weekend driving wise but it should help me a bit come the Sunday race because I'll have a lot more track time than anyone else.

"Physically it might be a bit harder than a normal weekend obviously, but there have been plenty of guys who have done the Dunlop Series and the main race in the one weekend, so I'll play it by ear... I'll probably just have to chill out and have a quite night [on Saturday]. Sunday is the main race so hopefully I'm not too buggered Saturday night!"

The pilot of the ENZED Falcon opted against the co-driver option for the mini-enduro, the 20-year-old having undergone a 12-week block of fitness training to prepare for the race meeting.

"I obviously thought about it [the co-driver option], but I really didn't think it was going to be an issue," he said.

"The Dunlop Series race isn't really that long, it's a stint and a half, maybe two stints and I've done them before so I didn't really think it was going to be an issue, so I'd rather just do it myself.

"I think I can do it by myself pretty easily anyway. When I did Bathurst in 2012 I did a few double stints and did it fine... I'd rather do the laps and get the miles around Bathurst than give someone else them as well... Obviously I want to be up the front in the mini-enduro, I want to finish it and I think we'll be in a good shot to win it. We've had pretty good pace this year."

The Kiwi star currently sits seventh in his rookie year in the category, and is excited about the opportunity to have more track time around the legendary V8 Supercar terrain.

"It's a massive challenge, but I'm looking forward to it," he told v8supercars.com.au.

"You give your left nut to drive at Bathurst and I get to do 1250 kilometres, so I'm pretty stoked!

"It's going to be a challenge in the respect that physically it's a lot of time in the car, and they're not the most comfortable cars to sit in and spend time in... I'm going to know which way the track goes by the end of the weekend, that's for sure!"

The 26-year-old will pilot his #38 Dunlop Series entry solo in the mini-enduro and has his sights set on continuing the strong form the Melbourne-based outfit has displayed throughout the season.

"For me in the mini-enduro, I've sort of set a goal that a top five spot would be nice," he said.

"I sort of feel that we are punching in and around the top five spot so if we could continue on with that, that would be great.

"I'm just trying to prepare myself physically the best as I can and get the car comfortable so it's nice and easy to drive, easy to handle and yeah, you've just got to man up and do the job!"

As well as the Dunlop Series, a handful of co-drivers will compete in other support categories, with Steven Richards, Craig Baird, Warren Luff and David Russell duking it out in the Porsche Carrera Cup.

Make sure you're trackside to witness the Dunlop Series first ever mini-enduro at the Supercheap Auto Bathurst 1000 - book your tickets now.

ShuRoo to help Nissan stay on track at Mount Panorama

Head to the Mountain in style

Cameron Waters  ›
Ant Pedersen  ›
2015 DVS Eggleston Motorsport ›
2015 DVS TEAM ENZED PRA ›
2014 Supercheap Auto Bathurst 1000  ›
Stay In The Know
Sign up to the Virgin Australia Supercars Championship Newsletter
We use cookies to ensure that we give you the best experience on our website. If you continue to use this site we will assume that you are happy with it.Ok