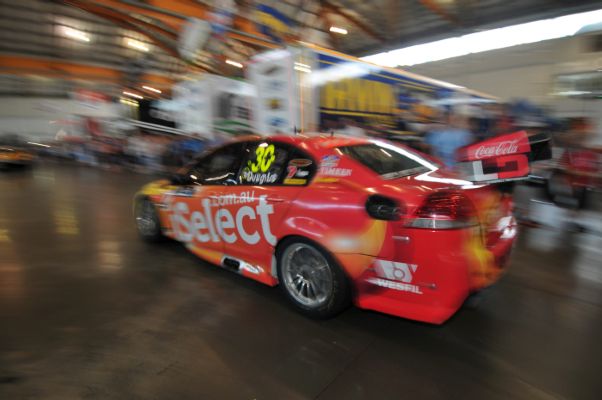 LUCAS Dumbrell Motorsport will expand to two cars for the 2013 V8 Supercars Championship.

Dumbrell’s purchase of Paul Morris Motorsport’s Racing Entitlements Contract (REC) has been approved for next season, which has been used this year to field the #49 VIP Petfoods Falcon of Steve Owen run out of the Dick Johnson Racing workshop.

Dumbrell, the youngest team owner in the V8 Supercar pit lane, will field a pair of new Car of the Future-specification Commodore VFs built by Triple Eight Race Engineering in next year’s championship.

“This is definitely what we’ve been wanting to do for a while,” he told BigPond Sport.

“Expanding makes it much easier for the entire team. With extra people you can bring in people with wider skill sets and afford to have those specialist people.

“With two cars we can do more stuff in-house because you can justify it.

“There are little things too. Having a garage twice the size creates a better work environment for the guys.”

Dumbrell says his staff levels would increase to the tune of three full-time staff (two mechanics and an engineer) plus an additional crewmember for race weekends.

This year LDM has run Taz Douglas under the Team iSelect banner and the V8 rookie finished 26th in the championship, though the team boss says his driver line-up remains up the air for next season.

“We’re working through drivers and sponsorship at the moment,” he said.

“I have a short list of drivers but it’s a bit up in the air so we’ll wait to lock things in.

“There are a few good guys out of contract and a few good quick DVS (Dunlop Series) guys so there’s a big pool to choose from.”

Sydney Dunlop Series round winner Scott Pye is high on Dumbrell’s shopping list and attractive given he drove for the team at the endurance races this year and has Triple Eight connections.

For more on Team iSelect: www.ldmotorsport.com.au