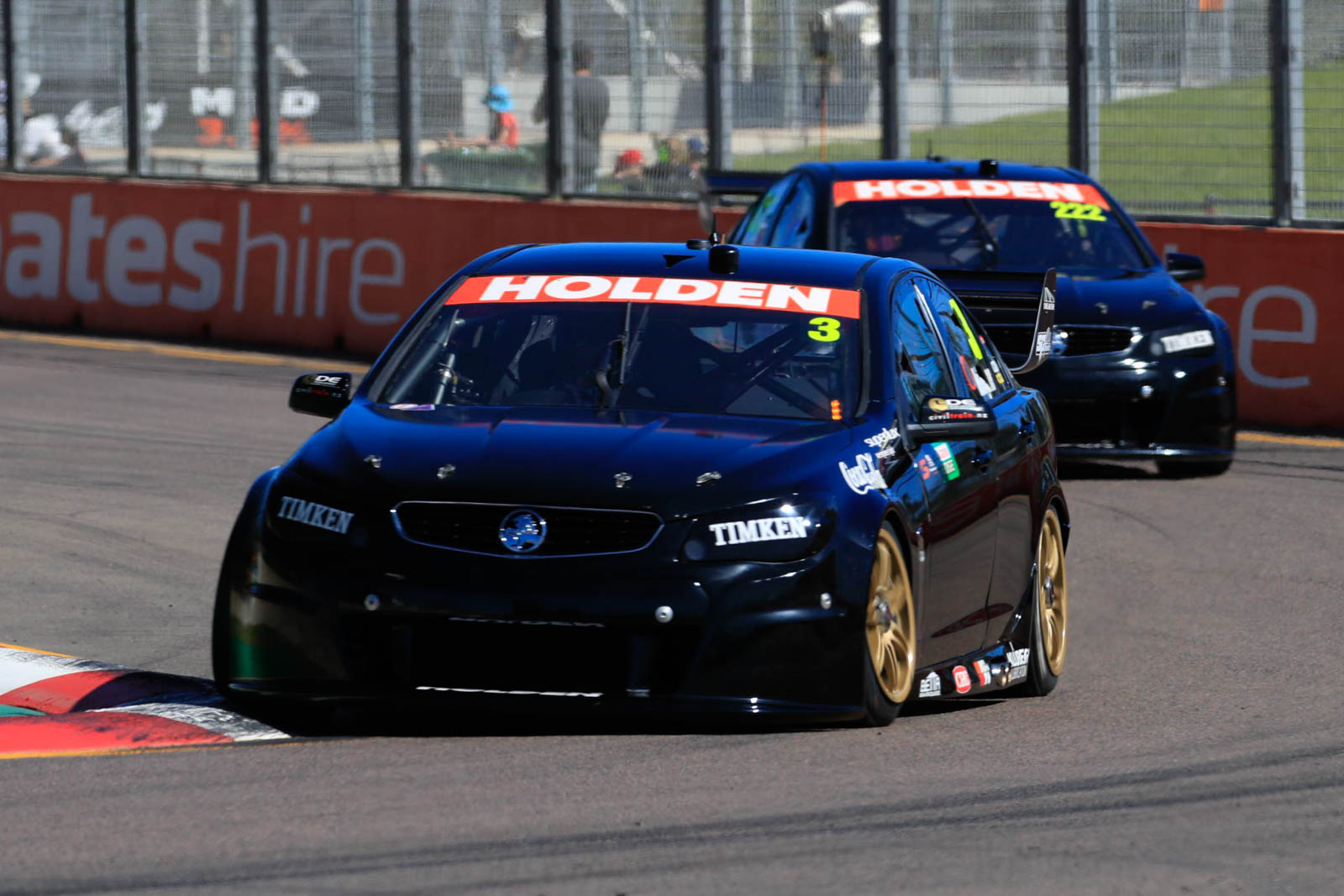 Despite a tough patch on and off-track, team owner Lucas Dumbrell remains resolutely committed to the Virgin Australia Supercars Championship.

The two Lucas Dumbrell Motorsport Holden Commodore VFs of Nick Percat and Andre Heimgartner raced at the Castrol EDGE Townsville 400 without naming rights sponsorship after a deal with a Gold Coast entrepreneur  pre-race.

The team even found itself defending an action in the Brisbane Supreme Court related to the aborted sponsorship in the days leading up to the Townsville race.

Last minute sponsorship from Plus Fitness sweetened the pot a little in Townsville, but the team also suffered a different type of blow when team manager Barry Hay wound up in hospital for much of the weekend.

Hay was out of hospital but still in Townsville this week as the team prepared for the Coates Hire Ipswich SuperSprint.

As well as financial issues the team has to deal with Percat’s stated desire to potentially move on. The South Australian is close to Dumbrell and brought LDM its first main game win when he scored on home turf in the rain-drenched Sunday race at the Clipsal 500 in March.

Despite all that Dumbrell, who established the team in 2009 at just 19 after a Formula Ford accident left him a quadriplegic, says he is confident of the future and determined to stay on the grid.

“Every team has financial pressure up and down pitlane. It is just how it is,” he told supercars.com. “I think definitely the times are turning and it’s getting into rosier and sunnier times.

“But it is a painful process, it’s like a footy club. Every few years they have their rotation of players. Like (Dumbrell’s AFL team) Collingwood, they are on a downward trend and I reckon they have hit the bottom and will start coming back up. They might win a premiership in two or three years. That’s how it goes.

“Motor racing is similar. You have to have the right people around like any sporting club and generally you get success.”

Dumbrell said the pre-Townsville legal issues had unfairly shone a light on his team.

“Financially we are no different to any other team,” Dumbrell insisted. “We just got a bit more profile in Townsville.

“But we have 99 per cent sponsors locked in for both cars going forward for Ipswich and the enduros. I have a lot of good partners who are smart guys.

“We will just carry on racing. There is absolutely no risk of us not turning up to the races. We will go racing to the end of the year and I’ll keep working with our sponsors and partners to make next year stack up.”

LDM’s long term backers include Holden and Phil Munday, while Lucas’ father Gary has also been a sponsor.

LDM has also expanded its activities in 2016 into the Dunlop development series and GT racing with the Rullo family.

Dumbrell acknowledged the challenge he would have retaining Percat and expressed sympathy for his friend over the backlash the 2011 Supercheap Bathurst 1000 winner received on social media after telling supercars.com he was frustrated about not racing with the likes of fellow 2012 Dunlop development series star Scott McLaughlin at the front of the field.

“It probably came out a bit bad for him and I wish I could have helped him message that better, because it is an important time of his career,” Dumbrell said.

“I have heard the chat as every one has. Nick is a good friend of mine and we are straight up enough that I can ask him where his head is at and he can tell me he isn’t doing anything yet … That’s the way we are

“If the driver leaves I don’t take it personally, It’s the same as a sponsor leaving or arriving. It’s not a personal thing, it’s just they might see another team as a better option.

“I rate Nick as a driver. I’d like to keep him, I don’t know if we can. I’d endeavour to because we have had him two years and he has been more than a driver.

“Nick and I were team-mates back in 2008 and it’s funny because he definitely understands me. He knows when I am stressed and so on.  He sees it better than I do and he is one who makes a conscious effort to try and help me. He is literally a core part of the team.”