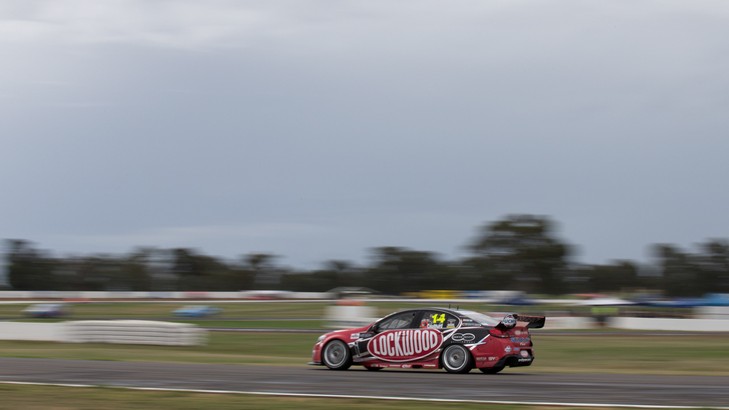 “We’ve had pretty good pace – to get pace out of the car for one lap like we just did is good for my confidence because it’s something that’s been lacking. It’s only Friday, but I’d rather be at the top of the leaderboard than down the back.”

“It was a difficult day today between the track and weather conditions. We made some spring changes in the last practice session which ended up giving us some good data and information. We’re still a little bit behind on the ultimate lap time which I think is a little bit to do with me and a little bit to do with the car and of course tomorrow is a brand new day. It’s been a tight turnaround coming straight off the back of the Tasmania 400 but luckily we had two relatively straight VF Commodores. But it’s been a lot of pressure for everyone. We have a little bit of work to do tomorrow but if we can get all the combinations right and see what the weather does, I think we’ll be in good shape.”

“I was happy with the car, despite having a few issues. We took second place in the wet second session and then fifth in final practice, but the Supercheap Auto Commodore felt good. We were running some decent tyres at the end, but we didn’t get the most out of them – so there’s definitely more to come. I’m confident that we can carry some of our car speed into tomorrow.”

“It was pretty up and down for us. Obviously we started well, but in the middle session when it was damp, we were absolutely no where.

“We need to have a look at that, because that was disappointing, especially after we started the day off so well.

“The last session was pretty crazy with a few red flags, and I’d say the track was 95 per cent dry, certainly a dry line, but if you stepped off that, you were going to have problems.

“The car is pretty good, but that time that Fabian did was very impressive, so we’ll work on getting closer to that mark.”

“The days don’t get much tougher than what we had today. Between the changing weather and track conditions, it doesn’t get much rougher and we’re looking at a whole new partnership when you chuck all those factors in the mix. We didn’t get the car right today and we ended up well down the order today across all the practice sessions. The positive thing to take out of today is we gathered some good data and we’re confident that we’re now headed in the right direction.”

"It was a really interesting day.

"I've never felt track grip like that here at Winton, we went out in the first session after watching some rubber and track surfacing repairs flying everywhere, and we weren't sure what was going to happen.

"The early Development Series times through were pretty slow, but we went out and the grip was exceptional, and the lap times were lightning quick.

"That was a good session for us, then it rained, it wasn't too bad in the rain, we need to do a bit of work on that, and then we had a reasonably dry run in last practice session.

"It was obviously hindered by a couple of red flags which hurt our runs a little bit, and then at the end we just buggered up the last run.

"All in all we're pretty happy, we're in the top 10 in all three sessions, we've got a lot of information and a lot of work to do.

"It's quite exciting to come to Winton and have the track in such different condition to what it normally is.

"You could see in the last session that it was under the lap record with some very, very quick times."

“It was pretty up and down for us. Obviously we started well, but in the middle session when it was damp, we were absolutely nowhere.

“We need to have a look at that, because that was disappointing, especially after we started the day off so well.

“The last session was pretty crazy with a few red flags, and I’d say the track was 95 per cent dry, certainly a dry line, but if you stepped off that, you were going to have problems.

“The car is pretty good, but that time that Fabian did was very impressive, so we’ll work on getting closer to that mark.”

“I am pretty happy with how the day went. We attempted to get through our program in between rain showers. I need to find a little bit in my driving so we can get the most out of our car tomorrow in qualifying."

“It was a very odd day. The track surface here has had the cracks sealed recently and the sealant is now spread all over the track so the grip is really inconsistent and hard to figure out. In the last session we ran new tyres but I caught (Robert) Dahlgren in the last sector and that cost me a fair bit. Without that we would’ve been in the top five so the pace is there. All-in-all it was a good day given everything that was thrown at us.”

“My Pepsi Max Ford doesn’t feel too bad but it is hard to sort out the outright pace at the moment. At the end of final practice people were doing two-lap flyers but then falling off track and getting in the way, which made things difficult. I think we will be okay but we will just have to do the job as soon as we get to qualifying."

“It was a hard day for us. Having no brakes is the most uncomforting feeling for a race car driver and it brings your driving confidence down.

“When you’re doing 230kmh down the straight, the first thing you grab is the brakes to pull you up. When there’s nothing there, it gets your attention pretty quick!

“We were fortunate to come away with a straight car, but I didn’t get much track time, which showed at the end of the day. We’ll work on it overnight and come out in a better place tomorrow.”

“Today was a tough day for everyone, obviously due to the rain. We were in the top 20 in all three sessions, and pretty competitive in the last one when it was dry. We’ll do our homework tonight, and hopefully be in the top ten tomorrow.”

“I never really got my best lap together today, but looking at the best times from all the sectors, it would have put us not far out of the Top 10. We didn’t run any new tyres, and I am guessing from the times quite a few did to be under the practice record. Looking forward to bolting some new tyres on the Wilson Security #17 and have a real hard go at Qualifying. The times were very fast today so we’ll see where we pop out.”

“It was a tricky day with all the silicon on the track. In the final session I put good rubber on, headed out, the red flag came out and we had to start again on cold tyres. Then when we got going we had no tyre temperature and I just couldn’t get a run in. We didn’t use new tyres as the surface was chewing them up. I was out of sequence and didn’t get enough laps on tyres with any temperature, which made it hard and led to a few mistakes. We will have new tyres tomorrow so we’ll see where we end up."

“It was a tough day, as we didn’t get to do what we wanted. But that’s the way it goes sometimes. The condition of the track affected our first session, the rain came in the second one – and we didn’t get a lot of running in the third. On the positive side, we got a couple of changes in so we have a lot of information to look at tonight. I’m looking forward to tomorrow.”

“It’s definitely been a hard day trying to work out this track, unfortunately the sealant used for some track repairs has torn up and is binding itself to the tyres and causing all sorts of issues.

“It’s unfortunate as we were the only team to have tested here this year, now the track is so different, that advantage has gone out the window.

“There is no doubt we’ve got a good car in wet conditions, and it’s probably one of my strongest areas as driving in the wet. We’ll be hoping for a bit of rain on Saturday.

“We didn’t really get our act together in the third session, as the grip level of the track changed once more and was actually quite fast as indicated by many people running under the lap record.

“I don’t think is a true representation of our speed, we will definitely get it sorted for qualifying.”

“I made a few mistakes and spent some time in the gravel trap. So you lose time having to clean the tyres up and it puts you on the back foot a bit. The first session was promising but as you can see from the times everyone really improved in the final session. I sat out the wet session in the middle of the day. We did not use any green tyres, but I thought we had a car capable of the Top 10. It didn’t go to plan and it ultimately cost me.”

"The car was not too bad this morning, and in the wet we didn't get a chance to put our wet weather setup in, but we were still half reasonable.

"That last session there we put a good set of tyres on at the end, which was really our only opportunity to do a run and see what the car was going to be like.

"A moron pulled out of pit lane with complete disregard for anyone other than himself when I was on the first of my two flyers.
"I caught him and it ruined the lap, so I had to sacrifice my first lap to get a gap back again, because he clearly wasn't going to let me by given that he had just pulled out of pit lane.

"So I gave him an absolute country mile, then on the second lap the car felt really hooked up and amazing, and I caught him again two-thirds of the way through the lap because he speared off about three corners in a row.

"Again he could not care less what was going on around him or behind him, so basically I did not get a single lap time with the tyres on, which is a shame because the car felt unbelievable, and it should have put us somewhere.

"Instead we're nowhere, with a bit of question mark over it, we need to go over the data and compare it to the other guys and see roughly where we would have been."