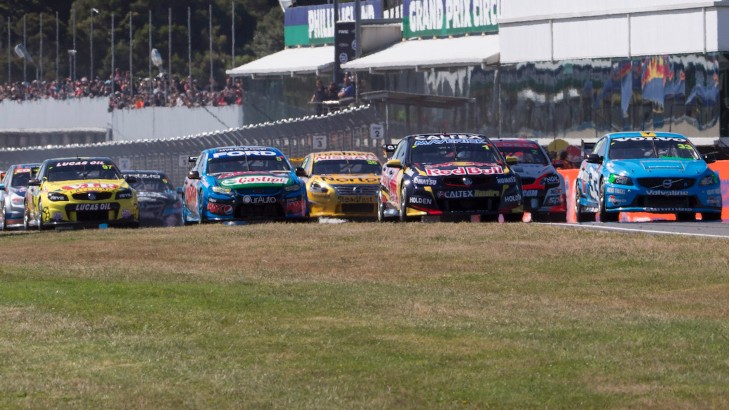 Scott McLaughlin, Valvoline Racing GRM, p1:
"I feel pretty ecstatic! It was an awesome fight with Lowndes in the first race and an awesome end to the final race.
"I feel for Garth (Tander) and in some ways it was a bit lucky. But my car was great the whole time and I knew that I had enough tyre life to attack him. It was very difficult because of the dirty air, you get a lot of understeer coming onto the straight. I am stoked to get two wins, climb to fifth in the championship and to claim my ninth pole of the year."

Mark Winterbottom, Ford Pepsi Max Crew, p3:
"That's the best we could do today. It feels like a mini victory when you get the most out of it. It's a good result for the guys. It has been tough, no question."

Jamie Whincup, Red Bull Racing Australia, p4:
"It was a relatively uneventful day for us today, we didn't quite have the pace that we had yesterday. We got out-powered down the straight off the start and then got passed by Garth Tander which put me in third and then jumped by Mark Winterbottom in the pits which put us back in fourth. We fought on and tried to get the last podium spot but we just weren't quite quick enough in the end. All in all it was a very memorable weekend, one we will remember for a long time and we still got some fantastic points from today, so an awesome team effort. Today also sealed the V8 Supercars Team Championship for us so we're all be proud of our efforts and looking forward to the Sydney 500 in three weeks."

Will Davison, Erebus Motorsport, p6:
"It was a really good feeling because we had really good speed and it was really rewarding.
"To end up with a car as competitive as that was fantastic and our strategy was great.
"We were hurt under the safety car, the pit lane was absolute chaos so I think our pit lane positioning really hurt us today.
"I'd just caught Whincup and Winterbottom and felt comfortably quicker than them and then in that safety car I lost three spots. Somewhere along the line my passenger side window popped out and that really affected my straight line speed on the restart - I was really vulnerable for a while and I was struggling to pass Bright.
"So I just kept my head down and once I cleared Bright, the car came to me a bit and we were quite quick to the end.
"Sixth is a great result, we earned it - 12th legitimately to sixth - but it should have genuinely been a third or a fourth. When you get in positions like that it's just so exciting to be able to drive up to the back of Whincup and Winterbottom and be in the race.
"Everyone should be pumped in the team, it shows great potential and promise.''

Jason Bright, Team BOC, p7:
"It was a good result. We made a lot of changes overnight and compared to what we had yesterday, it was a ton of understeer. I felt very weak in places and it was killing the right front tyre all race. I knew I was going to be a bit of a sitting duck. Will (Davison) was always going to get a run at some point. When he got past I thought we'd be in trouble with Percat and the others behind me but I was able to use our strengths in a couple of spots and hold him off enough and then I had enough tyre life to gap him in the last couple of laps. It was a lot tougher than it could have been out there but I'm happy with the result!"

Nick Percat, HHA Racing, p8:
"We had a good qualifying session and strong race today, with some great battles along the way. To be in the top ten twice over the weekend is something I am pleased with.
"I've got to thank all the HHA Racing team guys for giving me such a competitive car and we now head to Sydney, focused on another good result, to end out first year in the championship".

Michael Caruso, Norton Hornets, p9:
"We had a lot of speed this weekend, but unfortunately, the race didn't go to plan for us.
"We started in sixth and finished ninth, which isn't what we were hoping to do.
"The car has a lot of speed but I had to fight it at the end with a steering problem. We need to work out what the problem was there before we head to Sydney for what is one of the hardest races of the year."

Craig Lowndes, Red Bull Racing Australia, p10:
"Our car was good in qualifying, I just made a mistake on the second set of tyres which was my last run and just locked up a tyre and ran a bit wide. A little disappointing because the car was much better than we qualified. It was always going to be a tough race starting from 15th and the safety car came out at the wrong time for us. Stacking in pit lane was inevitable in that situation, it probably would have been worse if we were closer to Jamie but we were able to manage the gap a bit better. I had a good battle with both Rick Kelly and James Courtney, it was a fun race and we finished 10th which was a good solid day."

Scott Pye, Wilson Security Racing, p11:
"It is a solid comeback from 23rd to 11th, but is frustrating starting so far back to have to work through the field. Our race pace always seems to be strong, and the car is very good when you have to commit to overtaking other guys.
"The car's pace really put us in a good position. The team did a fantastic job and the car was mega which allowed me push on really well."

Rick Kelly, Jack Daniel's Racing, p12:
"Yesterday I had some dramas off the line, but the guys fixed that up for me and I got a reasonable start today.
"It's really quite a relief to do that, as it's such a fine art, it was great to be to sort it out.
"The car today wasn't quite as strong as it was yesterday with the changing track conditions, but that was the same for all of the Nissans.
"Unfortunately not quite a top-ten, I had an off at turn one with a bit of aero push, and it probably cost me a couple of places which would have put me in the 10.
"My bad there, but nether-the-less a really positive weekend and a good step forward.
"Just keen to go to the last round and finish the season off on a high to set us up for next year."

Bad weekend but still not as bad as last year. Suffered big damage and dragged her home in 13th. Bring on the street fight at Homebush.

Lee Holdsworth, Erebus Motorsport, p14:
"I want to finish on a high with the team. I want everyone to go into the break feeling good about the year.
"It would be nice to finish on a positive and with it being my 300th race is another reason to get a good result as well.''

Todd Kelly, Jack Daniel's Racing, p15:
"That was a shame, that was one helluva waste of a good race car.
"I had the pace, but I shouldn't have qualified back in 18th place to start with.
"The double stacking is basically what killed us, we went back to virtually last place, and then we had to drive back through the field.
"It's pretty hard to pass cars normally, but I was able to pluck a good handful off with the pace of the car.
"It's unfortunate about that safety car, because we had a good race car to get a result there."

Fabian Coulthard, Lockwood Racing, p16:
"We really struggled from the get go. I got a really good start, probably got three or four on the first lap but then just really struggled for rear grip. It was just drifting everywhere. We came in for the pit stop and made it slightly better but still not where we needed to be. It was disappointing but we'll get ourselves ready for a strong finish in Sydney."

Chaz Mostert, Ford Pepsi Max Crew, p17:
"It wasn't a great day. I am not quite sure what happened to bring me back in for another splash of fuel. Everybody had to double-stack under the safety car and of course you'll always lose some spots if you're the one queuing, but with my extra stop it was just never going to be my day. We are still in a good position to claim fifth but Homebush is really hard to predict so we will have to just put our heads together and see what we can come up with."

James Moffat, Norton Hornets, p19:
"The other three Nissan Motorsport cars have had a terrific weekend, especially Michael, he's really got something good going at the moment.
"On our side, for whatever reason, we're just not at their speed, so we need to go back and have a think about it and see where I'm going wrong.
"The positive is that we finished all three races and no reliability problems. That's a good sign ahead of the Sydney 500 which is notorious as a car breaker."

Jack Perkins, Team JELD-WEN, p21:
"It's a bit of a shame. Double stacking killed us today. We weren't going too badly considering we didn't qualify as well as we would have liked. We were only a couple of spots behind Reynolds when we pitted and he came out well inside the top 10, so a top 10 or 12 result was there for the taking and like a lot of other guys who run second on the road to the team-mate we got penalised for it so we'll go to Sydney and see if we can do a bit better."

Robert Dahlgren, Valvoline Racing GRM, p22:
"It was a tough weekend for me, we just didn't get it right. We had a problem yesterday that continued today. We will take more time after this weekend to analyse it and hopefully come out stronger in Sydney."

David Reynolds, The Bottle-O Racing Team, p23:
"We did a much better job in setting up the car today and I had a good start and look likely to maybe claim some big points early. After the safety car came out we pitted with the rest of the field and it got a little chaotic in pit lane. I made contact with Jason Bright and that is an automatic penalty so we dropped to the back. I couldn't do much without another safety car and one didn't come so that was our day really."

David Wall, Wilson Security Racing, p25:
"I think we could have had a reasonable run today. We started with Scott and he has got up to 11th place. We suffered a power steering failure today and luckily enough the gravel trap did its job and we only lightly touched the barrier. The boys did everything they could to try and fix it but we could not get back out."