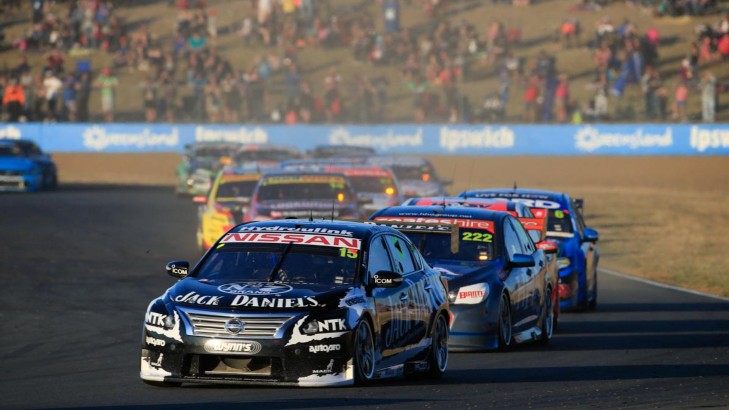 "The car was really quick all day, both in qualifying and in the race.

"Compared to yesterday, we had a much better race car today - the boys did a great job last night to improve its overall performance.

"In the race, it was great to be able to drive within myself, stay off the curbs and look after the car.

"I could feel myself slowly creeping away from the field towards the end and it was a great victory for everyone at the Holden Racing Team."

"We didn't have the qualifying that we wanted today so we knew that it was going to be a tough race starting from ninth. We had a few potential strategies going in to the race but we ended up being stuck in traffic so it was a great call by the team to pit after lap one because we had good pace at the start of the race but couldn't do anything with it behind Michael Caruso. This allowed us some clean air but with two longer stints we had to make sure that we looked after the tyre life but continued to push hard to keep track position and manage the gap to Chaz Mostert. We had great speed in the last stint of the race and it was great to be able to bring it home to stand second on the podium."

"It was pretty fantastic to get third in the end. James Moffat had some pace on us but we got the better of him. I thought we would've been stronger in practice so we need to try and get on with our program earlier in the weekend to help our development rate. To come away with two thirds gives me great confidence and we had the set-up to punch away at the front. I am looking forward to getting to the next event in Sydney."

"The car was a jet today. We qualified better, but probably should have been in the Top 10, but from the word go we knew we had a great car. To be fourth at the end of the race is a fantastic result. I think we were one of the quickest cars over the full distance today.

"The boys did a great job on the strategy and the pit stops. Because we had such good pace on the tyres we could stay out longer and shorten the fuel window and it really worked. I wish I was spraying champagne but that is close enough for today!

"It is great to give Wilson Security, PAYCE and all the DJR sponsors a good result here in Queensland."

"Pole was a big highlight, not only for me personally, but for the team as well. It's the first championship pole for Nissan since coming back, so that's a great achievement for everyone.

"Our car was excellent in the first stint of the race and I thought we were on for a pretty good day.

"In the middle stint, we came out in some traffic and just battled a bit for car balance. In the last stint, we knew we'd jump some people because it was a shorter fuel stop, and the balance of the car was better, but we were still battling in the slow speed corners.

"It was disappointing that we dropped a spot and finished fifth, but it wound up being a pretty good day, considering where we were running yesterday.

"It goes without saying that we have to keep this momentum going towards the endurance races - a time of year that I really enjoy the most."

"My day was relatively uneventful to be honest. We were glad that the issues we had yesterday with the engine, looking to improve the mapping, were sorted out today so there will be no more problems with that moving forward. This year, more so than ever, the competition has been incredibly close between all of the teams and drivers, which has been great for the category so I'm proud to be at the front at this stage in the championship. To lead the championship you need a quick car and to be consistent and we've managed to do a good job at that over the last few rounds but of course we still have to find some pace in some areas. Everyone has been competitive this year but respect has to be paid to Ford Performance Racing and the Holden Racing Team because they've done a great job so far and they'll no doubt be strong at the end of the year so it will be a battle right to the end."

"I want to say a big thank you to my engineer Alex (Somerset) and Performance Manager Ty (Anderson) and all the guys working on the #222 HHA Racing V8 Supercar for making it so good on the soft tyres today.

"The car ran faultlessly all day in the longer race, of the Coates Hire Ipswich 400 and have plenty of momentum and motivation to take to the next round at Sydney Motorsport Park in a couple of weeks time."

"It was a shame to drop a spot at the end, right on the line.

"I didn't get the call from the crew right until the final lap that I was going to run out of fuel. To do 65 laps flat out and find out so late that we were in trouble was tough to swallow.

"I know seventh place isn't everything, but I had a good battle with Nick (Percat) for the place during the race. It was a fun out there.

"Overall, it has obviously been an encouraging weekend for the team, and I'm looking forward to getting back in the car in a couple of weeks at Eastern Creek."

"We got locked into that strategy. We decided if we were getting bounced around a little bit at the start then we'd go for it. It wasn't the strategy to win the race but from where we started it was about salvaging something. It certainly would have been nice to be a bit further up. It was all about looking after the tyres and bringing it home."

"We made some gains over the weekend and it showed today. Very happy for the team with Scott's results and reasonably happy with a P12, I just would have liked it to be a single digit.

"A couple of things really didn't quite work out for us today. A long battle with Garth Tander in the middle of the race probably cost me some time but we were able to recover. Qualifying cost me again although it was a much better result than Saturday. Overall a good day for the Wilson Security team."

"Unfortunately it was sometimes a little uneventful out there for me, especially when there are no safety cars.

"We got off to a reasonable start, the guys gave me a strategy to come out with a set of green tyres at the end.

"I thought I had some more grip than what I did, and I went off at turn three and lost probably five spots.

"We should have finished ninth, and we wound up 15th, so unfortunately it was a silly mistake by me which cost us a pretty damn solid result, which probably would have been our second top 10 of the weekend.

"I'm a bit upset at myself for that, but we made some changes to the car today to change some handling traits that we've had all weekend, and I really think we managed to do that and make some good progress.

"Unfortunately everyone else seemed to make some pretty good progress overnight as well.

"After I made the mistake we still had good pace, I was racing with Tim Slade who drove a really solid race and didn't put a foot wrong, so that was the best we could do.

"On to the next one which should be a good one for us, I'm looking forward to that."

"I felt like we had quite a good car in the race but the damage was done in qualifying really. We're going to have to really focus on qualifying. I felt like with the car I had then I could hold my own in any part of the field but if you're too far back at the start it's really difficult. Number one on the to do list is to find some confidence in the car for qualifying so we can set ourselves up better for the races."

"It's funny to say this, but I actually had a grin on my face for most of that race.

"The car was unbelievable, we changed it a little bit for qualifying, and we didn't really get the most out of it, and we went quite a bit further with it for the race, and it just hooked it up.

"I then made a change to the (anti-roll) bars late in the race on older tyres, when a lot of other guys were on greens, and we were one of the fastest cars on the track.

"So it really hooked up there towards the end, it's just a shame I didn't put qualifying together with that setup change, and I also had a lap where the brakes went right to the floor, and I couldn't pull it up before turn three and I lost a lot of time.

"It was a bad day results wise, but a good day with what we've found in the car, and I can't wait to get to the next round to see how it goes.

"But today was probably the best car we've had since we started with the Nissan Altimas."

"It was a tough day. We were trucking along well in the second stint but the puncture obviously hurt our chances. We'll keep fighting of course and we're not doing too much wrong at the moment. It was a points hit but if we are quick enough we'll make it back up there easily enough. Chaz was quick and there are positives to take away so we'll bounce back."

"We had a disappointing race then, the balance of the car was pretty ordinary, we made a great change for the final stint, and we had great pace, but the damage was already done, and we were too far back. We'll put our head down, and come back for Sydney Motorsport Park in a couple of weeks, getting ready for the enduros."

"A puncture put me a lap down and that was the day really. We then turned the race into a bit of a test session and encouragingly the changes we made produced a gain so we did learn something out of what was a tough day all round."