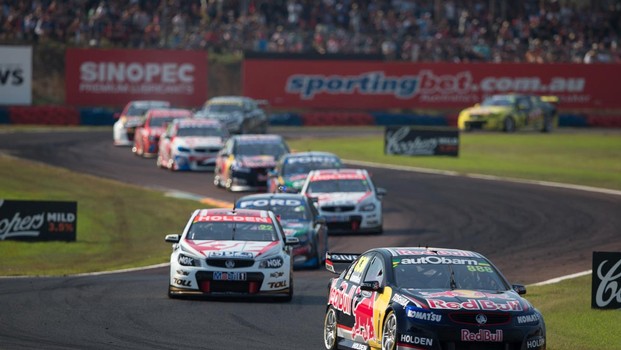 "With all the accidents and safety cars that went on at the start of the race we knew it would be a reduced race. We thought we could push on but we pushed it a bit hard. We burnt the rears up quite quickly and with that Frosty pounced.

“It is great to finish the weekend with a win and a second place and I am very happy with the day we had. In the second race I tried to conserve my tyres early and then when we passed Dave I was surprised I closed down Craig so quickly. That was really encouraging but it would’ve been nice to have an extra lap as we just fell short. We had good single lap and race pace this weekend and we hope to keep our good tyre life next time out in Townsville.”

“We came out all guns blazing today and we’ve used the gains from testing really well to put in what I see as my best performance of the year so far. I am working well with my engineer and we are starting to unlock this car which we showed today. I am pleased the team got a win this weekend and both Mark and I were competitive so it was good for the crew to taste a bit of champagne after a tough day yesterday.”

"Proud of our @TeknoAutosports team. We didn't get a podium today, but we took 1st and 2nd in points for the round. Bring on Townsville!"

"An interesting race today with lots of carnage. Thankfully both @shanevg97 & I came out clean and took home some valuable points."

"James (Courtney) ran some development stuff on his car from the start of the weekend and we put that on or mine after Sunday qualifying for two races and my car was instantly better. So be able to make a change like that, have James start with it and me put it in and basically have both cars better, was really encouraging."

“We scored a few points today and while the car felt good in qualifying trim we didn’t quite have the pace, particularly in the second race. We made some changes that didn’t quite work but I took a few whacks which hurt the car and we just did what we could from there. The team is showing strength overall but I just need to make sure I am the one standing on the top step next time.”

“I have to say a massive thank you to the whole team, it was definitely a big step forward this weekend. I think over the course of the year we have struggled in the hot conditions but the guys have done a really good job on the engine side of things.

“In the last race today we had a great pit stop and I was really pleased to get another top 10 for the team, although it was unlucky for Tim and Lee and it would have been nice to have all three cars straight and high up the grid which I think they deserved.

“There are plenty of positives to take away from this weekend so we will now try and carry that momentum over to the next event.”

"Not the race day we wanted but lucky to finish!"

“This weekend has certainly been more good than bad for me.

“The 21st finish in the first race today was disappointing, but we had great speed and as we know at Hidden Valley, if you don’t qualify well, it really hurts you trying to come back through the field.

“In the first race, I had good pace on my own, but it’s extremely difficult to pass when you get behind someone.

“In the last race, I kept my nose clean at the start, which was almost impossible given the stuff that we saw go on.

"The team has some work to do to fix James’ (Moffat) car, but hopefully we can go to Townsville with some more improvements in the car and continue to progress.”

"Managed to keep my nose clean this weekend and come away with some solid results! Can't wait until Townsville!!"

“In the first race we had pretty good pace and got past quite a few cars early on but the tyre life dropped off and we gave them all back in the final few laps. There was plenty of drama in the second race and I was watching cars go everywhere in front of me. I picked my way through and after the restart the car felt quite competitive. I kept chipping away and made it up to P15, so it was good to be back in that position after some lean results. The car is fairly straight and we learned a lot this weekend which we should put to good use in Townsville.”

“The other two Walkinshaw Racing cars have found some pace; hopefully we can translate those learning’s to my car and get back to where we were at the start of the year.

“With these cars you have to have everything working for you; hopefully it will be improved for Townsville and from there we can go racing.”

“Qualifying for the first race was good with a P13 result. We went OK until the pit stops then we went to the soft Dunlop tyre. I caught Todd Kelly and we bumped a bit which I reckon knocked the toe out a bit and we burnt the tyres up and drifted back to 17th. In the second race I started back in 20th but had a blinder of a start and picked up three or four spots. I escaped the big crash at turn 2 but I think I did some damage to the car. The car never felt as good after the restart then I caught Todd Kelly again and we had a fair old go in the last few turns. I was off the road and could not quite pull it up and nipped him on the exit. I ended up in 17th spot. We will look forward."

“We were very lucky to stay clear of the chaos there in race two, especially considering where we started from and then we get the drive-through.

“Obviously it was a crazy start to the last race but we got through the drama and into a pretty good spot and apparently the wheel spun in the stop. I haven’t seen it but apparently they did and it was a disappointing finish to the weekend. We’ll go away somewhat disappointed.

“We just didn’t quite have the pace this weekend. It’s an off day for us, but to still roll in fifth and almost fourth in the first race it could have been worse.

“We had our challenges this weekend. But the car was definitely better in the last race despite the penalty and I’m absolutely rapt for Craig."

"We should have been miles further up the road than all of that agro.

"I lost a few spots in that safety car period that put me back, but the car was well and truly faster than the guys in front, but we're just so vulnerable up the straight that I got gobbled up again and moved back even more.

"Where we finished is certainly not representative of what the car could do, so it's a shame we ended up getting unnecessarily taken out."

“Today, along with the rest of the weekend, was average. All weekend we struggled for pace and to get the car to my liking and that put us back in the pack and when you are back there the risk of being involved in someone else’s accident is pretty high and that’s what happened twice. The incident in the second race today was severe enough to force me out at the start which just capped off a weekend where we thought we’d rebound from the ground we lost in Austin. All we can do now is analyse what happened and coming out raring to go in Townsville.”

"We're a little bit happier here at HRT, we've definitely found car speed; it's nice to have a racier car and be at the front … All around we've found some good car speed. It's encouraging for the future and even though upset about the last results we're still smiling because we made some steps forward."

Tim Edwards, FPR Team Principal:
“What a difference a day makes. Today we showed just how strong we are as a group and a pole, win, second and third place is very rewarding for the whole team. We executed our strategy well and our pit stops were clean and quick so I am very proud of everyone. Mark obviously got the win monkey off his back and Dave was quick in qualifying and racing and must be commended for his best weekend for a long time. Will claimed valuable points when he just didn’t quite have the ultimate pace which is what he needed to do. Alex had a really tough time, much of it down to just being caught up in other people’s incidents. We set aim now at Townsville where we are focussed on delivering another strong team performance.”

16/06/2013
Related Content
2013 SKYCITY Triple Crown  ›
Stay In The Know
Sign up to the Virgin Australia Supercars Championship Newsletter
We use cookies to ensure that we give you the best experience on our website. If you continue to use this site we will assume that you are happy with it.Ok