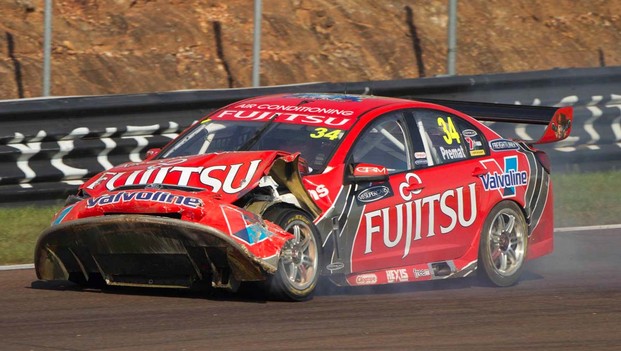 Seven drivers could not complete Race 19 today at the SKYCITY Triple Crown at Hidden Valley Raceway in Darwin because of damage sustained in the huge crash that unfolded on the first lap.

While it was difficult to judge, contact started mid-pack with Scott McLaughlin sandwiched between two cars, Jason Bright and Time Slaide. McLaughlin had a bad start and said he was swamped off the startline – and there were so many cars trying to make up positions, the incident occurred.

The Stewards have deemed it a racing incident and have not applied a penalty for the action – but here is what some of the drivers involved had to say.

McLaughlin managed to finish the race, though in a damaged car.

"I lost my start page, the whole dash that shows throttle percentage and all of that stuff. i was flying blind at the start, I got a really bad start and that's what triggered it I think, because everyone swamped me. I was sandwiched the whole way around the turn and I honestly had no way to get out of it.

"I went and saw everyone, like Slade, and it's unfortunate but he's all good and it's just racing.

"It sucks for all the teams down pit lane to get so much damage as well. It's that crazy  – because it's short races, everyone's trying to make up so many positions. I think that's probably a downside of having the short races, but it's god for the fans and that's probably the main thing.

"I find it fun, you've just got to be on your toes and that's what happens.

"(Teammate) Alex's (Premat) damage is worse than mine – the car's not too bad, it was pretty bent the whole race so I just try to limp home and to get eighth I'm stoked for the boys.

"I said thanks to them over the radio, they work night and day for all those people to smash it on the first lap."

“The second race, I’m really not sure what happened. From the replays I’ve seen I don’t think anyone did anything wrong, it was just one of those situations where there were three cars wide and one car hit another and I got turned around. It’s just a shame to have to end a good weekend like that.”

“For starters, I couldn’t see the lights – which I only realised when I pulled up to the grid.

“So I got a terrible start because of that and I just came around turn one, up the inside of Ingall I think it was, so it was all good.

“But I could see a bit of commotion up ahead so I was staying to the left (the right when looking at the accident on the TV footage), and then suddenly Moffat just appeared in front of me and I had nowhere to go and I hit the wall and up I went.

“I’ve still got a sore head and some sore ribs. It was some pretty heavy impact.

“It doesn’t look good (for the car). The front will have to come off, we’ll have to basically start again.

“We struggled all weekend really for pace, so we just have to cross this one off the list and look forward.”

“It’s certainly the biggest hit I’ve had in a V8 Supercar.

“It caps off our weekend, really. We haven’t been competitive and I feel very sorry for the guys in the team because there’s a lot of damage to the car.

“I didn’t see what was going on in front. At the start of the race, you’re jostling for position anyway, and then all of a sudden the field propped in front of me and I had no where to go.

“There’s a bit of damage to #360, and the boys have a bit more work to do than what they normally would to turn it around for Townsville.

“That’s our first DNF for the season and that was one personal goals that I’d set myself at the start of the year, but that one was out of our control.”

“It was just one of those weekends where nothing went right for us.  Before the two races I thought we were getting on top of things today but there was some pretty crazy driving this weekend. In that last race (Tim Slade) Sladey got turned in front and it caused a bit of a chain reaction. Unfortunately I got caught up in it.

“I think one of the cars that bounced off the wall hit me, but it was all a bit of a blur. ”

I got caught up in it, I saw the accident happen in front of me. I saw it early enough to react and have enough time to avoid, or at least give myself enough of a chance to avoid the carnage, because there was literally cars spearing in every direction.

The car behind me, who I think was James Moffat, obviously didn't see the accident and was flat on the gas, ran straight into the back of the car and pushed me onto the track, so it's not nearly as badly damaged as some of the other cars that got towed out of there – but bad enough to put me out of it for the day."

David Wall  ›
15' Nissan Motorsport ›
15' GB Galvanizing Racing ›
15' Erebus Motorsport ›
15' Repair Management/Team CoolDrive ›
15' Wilson Security Racing GRM ›
2013 SKYCITY Triple Crown  ›
Stay In The Know
Sign up to the Virgin Australia Supercars Championship Newsletter
We use cookies to ensure that we give you the best experience on our website. If you continue to use this site we will assume that you are happy with it.Ok