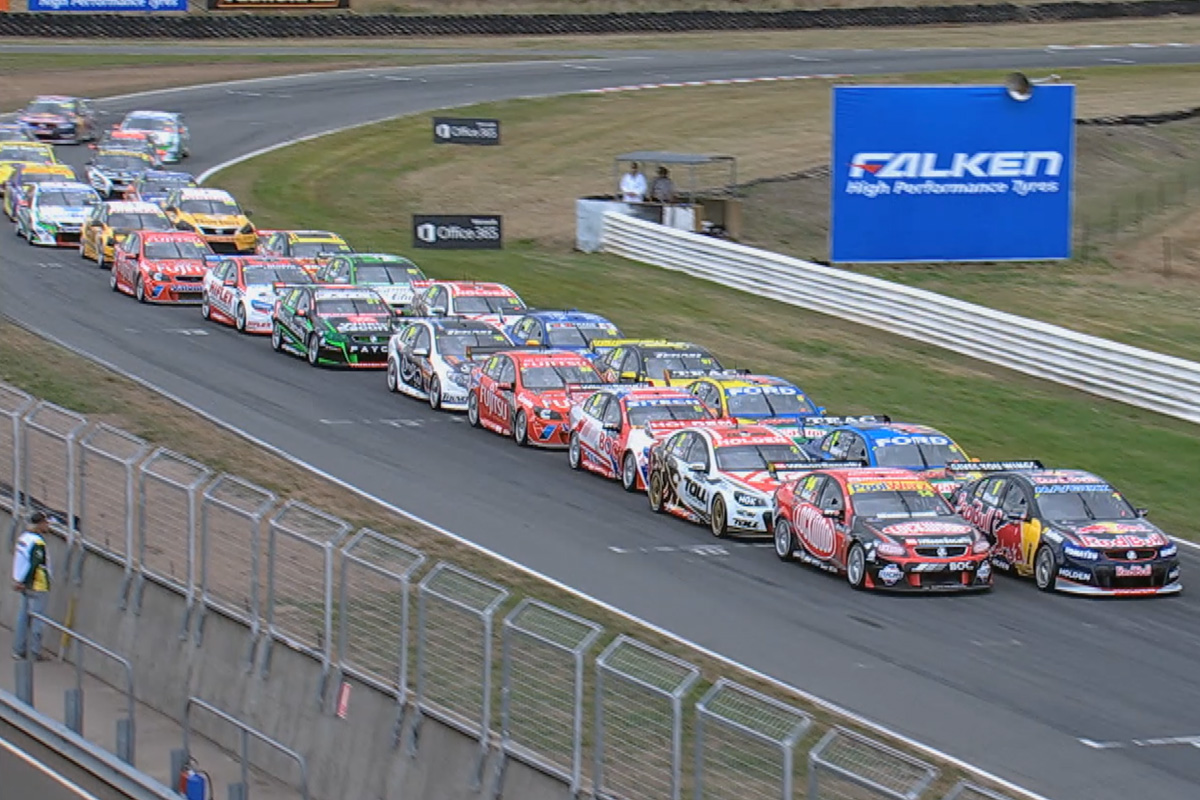 “I don’t mind it, it’s something different. We come to a few tracks and they haven’t been the most entertaining. I think this format is great entertainment and has been more exciting for the fans.

“It regrouped any gaps we had, there were rolling double-file restarts and there’s more action.”

“I am a fan of changing it up and new and different formats.

“I am not a fan of weighting cars and things like that but changing formats of rounds that we go to is a good thing.

“It’s like two footy quarters, instead of having ad breaks in the middle of the race and miss out on all the action, hopefully they can pack a few ads into our break and then come out for the next quarter.”

“I think the (half-time) gap today was quite long so it allowed people to do changes but I don’t think it will be the case every round.

“The 21 minute gap – or whatever it was today – gave people an opportunity to change their car. But these cars take quite a while to make changes so it will be interesting to see a shorter break and if everything stayed the same.

It works well, I think it’s good for the sport. It was the best race we’ve seen here in quite a while, not in terms of passing but the 28 cars having close gaps."

“I don’t know – I’m all for strategy. I like strategy and that’s no strategy, just sprint…

“Time will tell whether the format works but I like longer races, I like pitstops, I like strategy and everything that goes with it, and I think that’s part of our sport. But so is racing and hard racing over 25 laps might work.

“I didn’t see if it was boring, I didn’t see whether there were any other passing moves or not.”

“We just mucked up the restart but apart from that the races for me were batshit boring.

“We mucked up our radio call so I ended up bending up the bonnet (running into the back of Will Davison). My engineer said ‘green flag’ and I went then rather than waiting for the leader to go. So we will have to change our calls.

“I don’t agree with just having a race for qualifying, I think all races should be for points.”

“The format, it was pretty crazy on the restart, and they didn’t clean the inside of the track so as we went around there it was horrendously slippery. It looked like there were cars going everywhere but that’s what people on the hill are paying to see – cars run into each other – I suppose. So I’m not too sure.”

"I'm not a fan. I'd have to watch the race back to give a totally balanced opinion, but at a track like this, the field finds its status quo very quickly. It might look exciting for a lap, but I'm not sure it's worth putting the machinery at risk for it.

"It will depend what circuit we do it at.

"I prefer the longer races that we've had over the past few years. You have tyre degradation, people on different strategies, so that's the kind of racing I prefer."

"I didn't mind the 60/60 format. It was definitely different.

"The first race was boring, knowing it wasn't for points, but the double file re-start was interesting. I'm not sure what it was like on the outside for the fans."

“I’ve got no drama with it. Any change in format is exciting. It’s something a bit different. It’s a chance for us to work out which is the best way to approach it.

“The one thing that is a disadvantage for us is at 50-60kmh in first gear – and I didn’t realise this until I tried it here this weekend – the revs are extremely low and we don’t have a lot of power down there. As soon as we stand on the throttle it takes a bit longer for us to accelerate than others.

“So it is hard for me to judge it really well to get an advantage on anyone. So that’s a bit of a struggle.

“The racing is actually pretty aggressive so in that 15 minute window when you come in you don’t have much time to go and see the other drivers and sort out your differences!”

“I didn’t find the new format too much different as far as the chaos is concerned on the first lap. From where I was there was no more or no less chaos than a standing start.

“I think if the new format can work here it can work anywhere. With the nature of this circuit you are still coming around the last corner when the leaders are in the acceleration zone and then it’s quite a tricky couple of turns and there is not that much of a straight to sort it all out.

“I think if it looked good on TV and there wasn’t that much carnage than it’s a win.”

“I thought the new race format was confusing and I’m not sure anyone knew what was going on, there just seemed to be cars all over the place and I’m surprised everyone got through ok.

“It’s all about the fans though and if they enjoyed it I think we will keep it. I think it could possibly get easier if we do it at other tracks and I think at a track like Grand Prix it probably would have worked quite well.

“At this track, when the front guys get the green flag and the boys tell us over the radio it’s time to go, you’re still coming through the last corner while the guys at the front are just about at turn one because everyone in front of you is still doing 40km.

“But like I said it’s all about the fans and what they want to see so I think if they enjoyed it we will keep it; I think it would be good if you were at the front, but at the back it’s not so good.”

‘The race format was really good and I’m sure the fans enjoyed it. The racing was absolutely crazy in the early laps of both legs with cars running door to door and some big dust clouds where cars were spearing off.”

“The new race format was certainly interesting and the re-start was interesting as well. I think everyone came through more or less cleanly and I think it certainly provided some excitement. Hopefully it would have been exciting for the fans to watch.”

Lowndes positive for tomorrow after incident

06/04/2013
Stay In The Know
Sign up to the Virgin Australia Supercars Championship Newsletter
We use cookies to ensure that we give you the best experience on our website. If you continue to use this site we will assume that you are happy with it.Ok