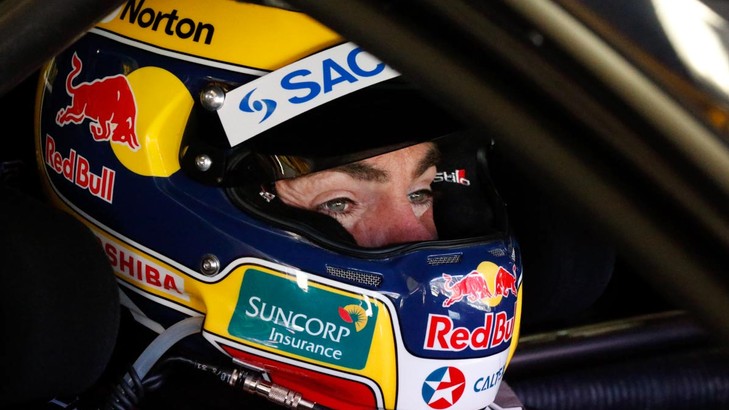 “We worked hard over the last three practice sessions to get the car just right and our set up worked well with the rising temperatures.

“It’s a new era for V8 Supercars, you can see that from Volvo’s result today. That’s the beauty of Car of the Future, it brings in new manufacturers which is not only good for the sport but to see them have a real crack at the podium makes things exciting.

“To start second in the first race and first in the second – it’s a pretty good start to the season.”

“Awesome day for everyone at Volvo and GRM. It was a pretty intense day with three practices and two qualifyings but the car felt good straight out of the box. A few changes here and there but I felt really dialed in straight away.

“Happy with everything, the engine seems to be running fine and we really only had one little hiccup today that cost us a bit of time but that was in practice one.

“A fifth and second in qualifying is unbelievable and something I will never forget. The feeling was amazing and seeing all the fans when I got into the pits was amazing, so thanks everyone for the support and hopefully the Volvo jokes stop sooner rather than later.”

“I’ll put it down to luck in the first qualifying session and the second session was more of a true indication of our speed, so a bit of work to do tonight to get the set up just right.

“It’s a perfect start with my new engineer Cauchi but of course it’s still going to take a few months to iron out the wrinkles.

“We were pushing hard and the track changed quite a bit from practice to qualifying and is a little bumpier than last year. My car was bucking me around the track most of the time, in saying that it’s still extremely quick which is the main thing.”

"The first qualifying session I just made a mess of. I couldn't get a lap together for the whole time.

"The car had good speed and I felt like it could have been in the top 5 easily. It was good to go out in the last session and actually prove it.

"We'll have a good race car for tomorrow but I'd like to make it a bit nicer for qualifying because at the moment it's too easy to make a mistake."

“It is pretty tough out there and there is no hiding behind the fact we are working pretty hard. We aren’t quite there so we have work to do to improve. Session two was a bit harder and for me the car isn’t quite sure under brakes. I can explain the issue calmly out of the car but inside it is not the easiest as there are plenty of concrete walls that get nice and close. P3 and P5 are reasonable positions so it isn’t too bad. Despite my issues it was nice for the sport to have all the brands in the top part of the grid.”

“Last year we were obviously just trying to find our feet, we’ve found them now and we’re going to move forward.

“We were all pretty excited coming here knowing that we’ve got a lot of improvements and how hard the team have been working over the break.

“Coming here and putting this car on track I was excited to see how it went and straight away I could feel we’d picked up speed.

“It’s a great spot to start in and we’ve got two 125km races tomorrow, so if we can get some solid top 10s in those races that would be fantastic and then we’ve got another qualifying on Sunday so who knows what can happen then.’’

“I didn’t get the most out of the car in the first session, but my engineer made a great tweak to the car for the second session and we put the car where it should be.

“We got a bit more out of it, but it’s just so hard at this circuit. The bumps seem like they’ve got bigger which makes it challenging.”

“The car felt competitive as soon as we got her on track this morning. We should have been further up in P1 but I got pinged for kerb hopping. The second session was much the same with some small changes made to the car. We went to green tyres in P3 and made some real changes that helped the car’s balance. For Qualifying we found about 6/10ths and really never looked back. The changes were perfect and my engineer and crew did a great job. After grabbing P8 in the first Qualifying we left the car as it was and got another Top 10 for Race 2. For the race hopefully we can look after the tyres and have a clean run.”

“We ended 11th and 10th so it wasn’t too bad being around the top 10 which is a good start. We just didn’t quite get on top of things and whether that was the car or my driving I don’t know. I think we have tuned it to be a good race car for tomorrow and we have longs races to come so that will help us. Overall our car was pretty balanced so I think we should be pretty good come race time.”

"It's not too bad a start, you always jump out of the car a little disappointed when you are not right up there.

"There are a few big screens around the track that actually have the times listed, I saw my name up there in second position for ages in one of those sessions, and we just dropped back a bit at the end.

"We probably weren't exactly in sync with the other cars when they did their fast times.

"But nevertheless there were a few mistakes I made out there, and there is still a bit of tuning to do to the car, as I guess most people have.

"Seventh and 11th is a pretty good start for the weekend, it's definitely better than this time last year, but we've still got a bit of work to do."

“I think we should have been in the top 10 in Q2, but I made a mistake on the last corner of my best lap there which cost us a tenth of a second.

“It’d also be nice to get a little more speed out of the cars. We’ll just try a few different things tomorrow and see if we can further improve our pace. Other than that it’s been an enjoyable first day.

“I’m happy with where we are right now. We didn’t expect to be so strong at the first race of the year, so that’s positive. We have the right people to make it happen, and all we need is time.”

“It’s a disappointing day, to be honest. I felt like I put in a big effort over the break, and I had higher hopes.

“We had a minor set back in Practice 3 when I clipped a tyre bundle, damaged the car and lost most of that session.

“It meant that we went into qualifying not really comfortable with the car, and 17th and 14th put us right in the middle of the pack, usually where the chaos is, but we’ll tune it up overnight and see how far we can move forward.”

"The car felt different than it did in practice.

"Earlier in the day the balance was good so we didn't change it for qualifying.

"Whether it was the increase in heat or UV or whatever, I don't know, but there was less grip.

"It certainly gives us more work to do tomorrow.

"It's easier to pass the cars in qualifying than in the race but we'll be right."

"Obviously I'm a little bit rattled by our qualifying results after we practiced strongly this morning.

"We came to qualifying and ran greens, and it wasn't anything blindingly obvious, the car just didn't grip up for us.

"You could see it in the times, a couple of guys that were up the top in practice, weren't able to achieve that in qualifying.

"The track grip came up, the track changed quite a bit, it caught us out and unfortunately favoured others.

"I'm excited by the initial form we've got, so we've just got to get back to having the car up the front like we had this morning, and work out way forward tomorrow."

“It was a very disappointing day for myself and Jack (Perkins). We run very different set-ups to the sister cars and they have proven a lot faster than us. We made a change for the second session and that made a small difference but nowhere near enough so we may yet make wholesale changes overnight and see what happens.”

“We ran the first two sessions on used tyres, and I was reasonably happy with the car. For P3 we did run a green tyre but caught out a bit with the Red Flag, so it was hard to judge if we had really got the balance where we wanted it. In Qualifying we ran two sets but the harder I pushed on the more nervous the car became. We will have a good look tonight at the set up and see what Scotty has done as he did a really good job. All in all a positive start.”

“It was a really, really busy day, obviously good to be in the car, my first true day in the car. At the Sydney test we didn’t really learn anything, so we’ve had to fast-track that learning phase today. Obviously it’s disappointing. They aren’t the results that we wanted, but there are two long races tomorrow so we’ll be doing our best to get the Team JELD-WEN Ford into the top 10.”

“Just completed my second day in the car and the first time on this track it was a good experience and I definitely learnt heaps and I certainly look forward to getting a race under my belt. We have another crack at it on Sunday with another qualifying as well and a long race there. I’ve learnt a lot and will definitely go quicker in the future – I’m looking forward to it.”